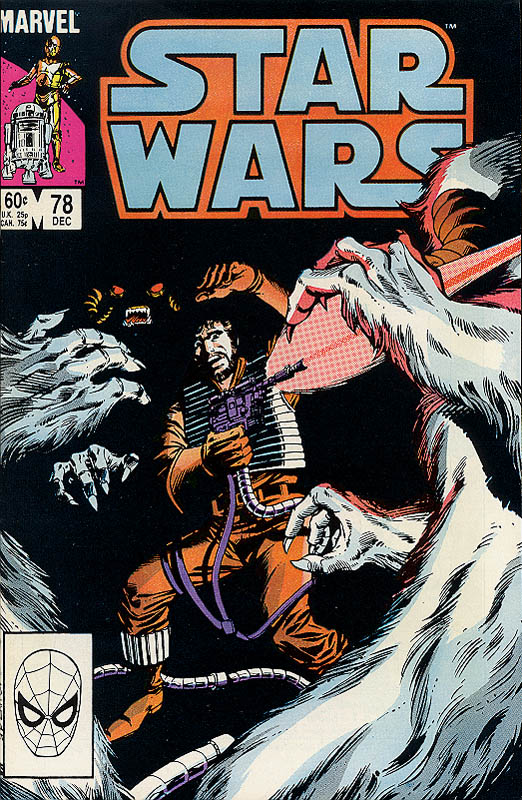 What is it ? : Leia, Luke and a Rebel Lieutenant who does nothing except exist so that exposition can occur are searching space in a single Y-Wing fighter for a transport that has been discovered possibly on a trajectory from Hoth.
They board it, but discover that there is no one aboard, and Leia tells Lieutenant Exposition that Luke is searching for Wedge Antilles, and she explains how Luke and Wedge grew up together and were closer than brothers. They check the ships logs, and discover that Wedge has indeed been aboard this vessel, and has left a recording of what happened to him.
After the battle of Hoth, Wedge and his co-pilot Wes Janson boarded a Y-Wing to leave the planet, but as they took off it was damaged and crashed back down onto that world. Janson was badly wounded, and seeing that the Imperials were swarming all over the base searching for Rebels, the two took refuge in a wrecked Imperial AT-AT instead as the Imperials made no efforts to find and help any survivors on their own side.
After a day or so, the Imperials leave, so the two Rebels sneak back into the Rebel base, taking up refuge within the abandoned Ion Cannon control room, Wedge scavenges the base for supplies, and locates the communications centre which is still functioning, but he cannot use it as the skies above the planet are still being patrolled by the Empire waiting for any relief efforts or stragglers.
The two stay in the base for months, but Jansons condition continues to worsen and he begins hallucinating before lapsing into silence and unresponsiveness.
Wedge discovers the old base has become infested with Wampas during one of his journeys outside their refuge, and rescues one of the Rebel Tauntauns, which he uses to get around.
However when he returns to the Ion Cannon control room he finds it has been looted and Janson has been killed. He discovers that scavengers have arrived to loot the Rebel base, arriving in a bunch of fighters and the transport ship that Luke and Leia have discovered.
He sneaks into their encampment, and sabotages one of their vehicles to cause a distraction so he can board and steal their transport, only to be pursued by their fighters. But he leads them towards the Imperial Fighters, leading to a skirmish between the scavengers and the Empire while he slipped away.
However, the transports engines had been damaged, and supplies on board ran out, leaving Wedge to record this message and realise it's just a matter of time until he dies.
However, Lieutenant Exposition notices a figure outside the window, and Wedge re-enters the vessel, explaining how he released that there were scavenged parts in the ships hold, and he was outside repairing the engines when they arrived, which is why they couldn't detect him aboard.
Having rescued their friend, they head back to Arbra to celebrate.

High Points : This is a pretty good story, and reminded me of a lot of 1950's sci-fi stories about pilots stuck on alien planets facing off against alien foes and hostile environments. The story of Wedge and Janson on Hoth holds together extremely well, and was one I really enjoyed, stuck for months scavenging the remains of the base, I found it really evocative and interesting. And apparently I'm not the only one as this story has been mentioned in the Disney continuity and canonised, so the tale of Wedge and Janson being stuck on Hoth and facing off against scavengers is still official.


Low Points : Leia tells Lieutenant Exposition (real name Barlon Hightower, which is somehow worse) that Luke and Wedge grew up together and were closer than brothers, now either she or the writers are very confused, since that is actually Bigg's background, and while Luke and Wedge are friends, they have no history together.

I also found it just a little too convenient that Wedge's trip outside the transport takes just long enough for Luke and Leia to listen to his entire logs, although the writers were likely trying to preserve some element of risk that Wedge dies, the story could have made just as much sense if rather than the logs, a weakened but rescued Wedge was telling them his story.


So what do you really think ? : After the blunder with Wedge's backstory at the start of this issue, I wasn't expecting much, but I got drawn into Wedges tale of surviving the battle of Hoth, but not getting away like Luke and Leia had. It's a nice little survival tale in the Star Wars universe which makes a whole load of sense. It makes sense that Wedge couldn't call for help because of the Empire patrolling the system waiting for such an effort. It makes sense that Scavengers would raid the remains of the Rebel base for weapons and technology.
Even the finding a Tauntaun and battling the Wampa's really fits within what we've seen in The Empire Strikes Back and other canon sources.
It all makes for an extremely solid story, well placed within the canon stories, which I found really enjoyable.

Final Words : Well, this issue does seem to jump out of the continuing storylines, since it's sticking with Luke and Leia without mentioning that they've just returned from Kabray, or mentioning Lando and Chewbaccas mission to find Han. But I guess we'll jump back into that next issue.