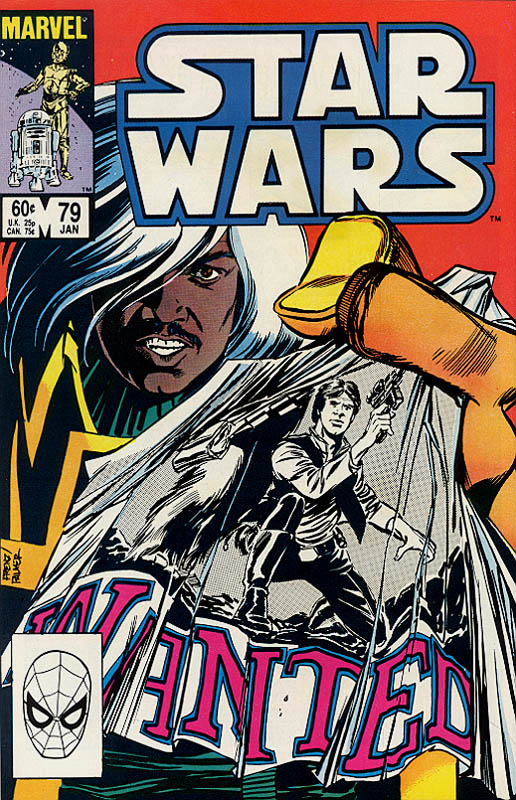 What is it ? : A group of Pirates are celebrating Han Solo's capture by Boba Fett on the city world of Arcan IV, yet cursing him because they think he has information they need for their next heist. Lando and Chewbacca enter their hideaway, with Lando disguised and calling himself Captain Drebble, and not using Chewbaccas name.
He tells the Pirates that he's heard of their heist and need for Han, pointing out the relics they need Han would have been able to find easily, citing his ability to locate the missing relic of Vol on Stenos as an example. The gang admits that they know Hans location, but hadn't thought of freeing him. Because of his knowledge, and the presence of the mighty Wookiee, the gang agrees to let Lando join, and he returns to his ship, the Cobra to rest.
After he discusses conning the pirates with Chewbacca, how he intends them to free Han for him, or at least tell him Hans location, the Pirates arrive to take Lando for a celebratory meal.
Taking him to a bar in their speeders, Lando struggles to keep his disguise on as it nearly blows off in the wind, they ply Lando with strong drinks, before they reveal that Han has already been handed over to Jabba the Hutt, in his drunken
he blurts out that he and Chewbacca had already checked their, revealing the Wookiees name and their identities to the Pirates.
He and Chewbacca race off in a stolen Speeder, but pause to ask a Prostitute who is walking the streets advice on the best way to the Spaceport, she spitefully gives them wrong instructions, and they end up turning into oncoming traffic, which causes them to eventually crash.
One of the pirates catches up with them, but suddenly turns on her comrades when she finds one of the Relics they were looking for which Lando has been carrying all along.
During the fighting, Lando slips away, and reveals as he and Chewbacca fly off, that he'd won both of the Relics the pirates were looking for ina gambling tournament, and still has the second, which is how he learned of the Pirates, but he wonders what they wanted them for.

High Points : There's definitely a solid story here, although it's a fairly light hearted romp with Lando clad in an outrageous long blonde wig for most of the issue.
The idea of Lando trying to con a group of pirates into the value of Han, so they will rescue him is quite a strong one, and Lando's continuing use of his Drebble identity amuses.
I was also really impressed with the setting, Arcan IV is a city planet which resembles a high tech version of Earth, which is something we've not really seen in the Star Wars universe. The use of busy pedestrian streets, fluorescent advertising hoardings, loads of speeders on multilane highways is familiar enough that we recognise what we're seeing, but with enough of a Star Wars spin on it to be unique and interesting.

Low Points : We never really find out what the heist that the Pirate gang are planning is, and why they need the Statues that Lando turns out to have, I know it's not really relevant to this story, but is glossed over so glibly that it annoys. It's obviously something so important that it makes the Pirates turn on one another at the end, but so unimportant we're not told any details at all.

I'm also slightly annoyed that the Pirates have the location of Han, which is why Lando is scamming them, but we're never told of any particular inside knowledge by them, in fact when they reveal it to Lando, it's given out as if it's so mundane knowledge that they expect everyone to know.

The scene with Lando asking a Prostitute directions seems really out of place in a Star Wars comic. The writers make sure you know what she is, and that she's frustrated due to not getting any business that night, so when Lando speaks to her she gives him wrong directions out of spite it does seem in character. However, Lando taking a wrong turn due to not knowing the city would have led to the same outcome, and seeing Prostitutes walking the streets in a Star Wars comic really doe seem jarringly out of place.

So what do you really think ? : I really enjoyed this one, it's light hearted enough to be fun, but finally progresses the search for Han, the action is good, especially the Speeder chase towards the end of the comic. And the gang of Pirates amuses, I especially enjoyed the internal dialogue we are privy to as they act nice towards Lando when inviting him for the celebratory meal, all while planning on getting him drunk so they can get information from him, "Is this what smiling is supposed to feel like, it hurts!".

Final Words : Not sure how I'm going to handle this, I've been continuing through the main Marvel comic series, ignoring any specials. However, this time they released Return of the Jedi as a separate series rather than including them in the main comic run like they did with Empire Strikes Back and Star Wars itself.
My intention was to finish the main run, and then cover all the specials, however if I do that, then the events of Return of the Jedi just occur between two issues (in just one issues time), so either I can just just gloss over that, since it's not like we don't know what happens. Or I can cover Return of the Jedi, then come back to the main series, and finally cover the other specials at the end. Hmmm, decisions, decisions.