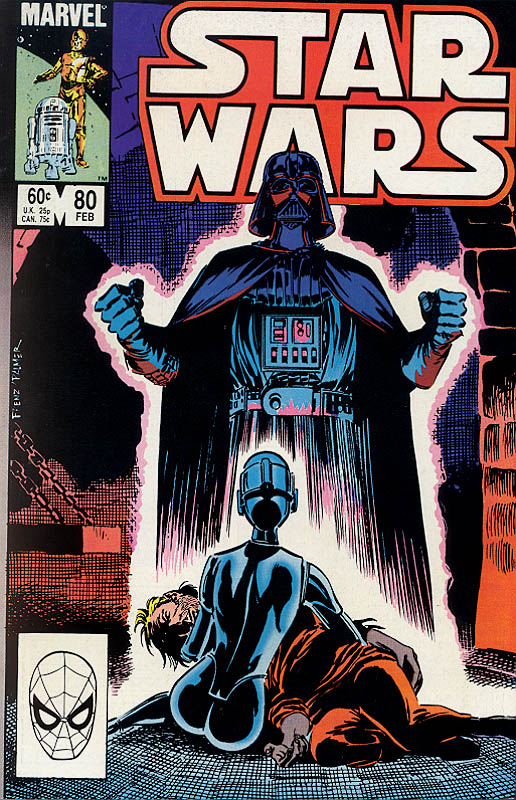 What is it ? : Luke, Leia and C-3PO arrive on an unnamed world looking for Tay Vanis for the data he was carrying, they infiltrate an Imperial base and ask the droid in charge of supplies (LE-914, called Ellie) for records on Tay Vanis. This search sets off an alarm and the Rebels must fight off Stormtroopers, during the battle one of the Stormtroopers shoots at C-3PO and Ellie puts herself in the way, her armoured chassis taking the hit without damage.
Even though the search set off the alarm, Ellie has the co-ordinates for Tay Vanis, and agrees to lead them there, so they board the Millenium Falcon and she leads them towards the Castle which used to be the seat of the government here before the Empire exterminated the population.
However they spot Vanis's crashed X-Wing near to the Castle and landing they discover a message that he left for his rescuers, explaining that the data was Bothan records he and his partner Yom Argo had retrieved, and that he had left it with his droid LE-914, Ellie.
However while they have been watching the recording, Ellie has slipped away so they track her to the Castle, guessing that she is looking for her master, Vanis, they break into the Castle and locate his prison cell, finding him catatonic.
A recording from Darth Vader plays, explaining that he has ensured that Vanis cannot tell anyone what he knows, so the Rebels are welcome to take him as a reward for their hard work in locating him.
Ellie arrives, and apologises for her deception to them, handing over the Bothan Records she has been carrying in a storage space in her chest. She explains that Vader hasn't left Vanis alive as a kindness, but as a trap to slow them down as they attempt to escape which will lead to them being captured. She remains with her master, and Luke plants explosives to destroy this Imperial base as a memorial to Vanis.
As they return to the Millenium Falcon the explosion lights the stormy sky, Luke contacts Admiral Ackbar with the news on the Bothan records, and C-3PO stares into the distance, rain running down his face giving the appearance of tears for the droid that had saved his life.

High Points : And so ends the story arc which began 7 issues ago, and neatly leads into return of the Jedi, as it turns out the data they've been searching for all this time turns out to be the Death Star II plans from the Bothans.

This is quite an emotional issue, and the heart of it is the fate of Tay Vanis, left catatonic from the torture Vader has put him through. The comics have never been quite as dark as this, with Vader not only torturing a person and destroying their mind leaving them just a shell, but also then using the Rebel compassion for each other and their habit of never leaving anyone behind against them, using Vanis as a way of slowing any Rebel rescue down leading to their capture.

We've also got Ellie's love for her master, she mentions with pride the trouble he caused for the Empire, and remains with him in his final moments as the Empire closes in sitting and cradling him right until the castle is destroyed around them.

Even down to the final moments, where C-3PO appears to weep for the droid who showed him compassion and then died with her master, hits you right in the feels, his emotionless metal face has never looked so distraught and sad as the addition of rain running down it has made it at the end here.

Low Points : For all I love in this issue, and can forgive, I have to comment that much of the story doesn't make sense. Luke and Leia have arrived at the Imperial base under cover of transport pilots, and have docking clearance for the Millenium Falcon, approaching Ellie in her role as manifest officer openly, even though they've been sneaking around the base avoiding Imperial patrols in a very suspect manner. Either they're allowed to be there, so don't need to sneak past the patrols, or they aren't allowed to be there and were hoping that the manifest officer just wouldn't know. But it does appear that they're there with actual permission, as they receive flight clearance for the Falcon before they depart, so all of the sneaking around doesn't make sense and was done to build pointless tension.

Then they don't question why and Imperial droid, they've just gunned down Stormtroopers in front of is agreeing to lead them to Tay Vanis, especially after just a record search for him set off alarms. It makes no sense why she would accompany them in her role as manifest officer, yet Luke and Leia are completely fine with it and not suspicious at all.

I also have to question, how in hell has Ellie ended up as Manifest officer in an Imperial base? Did she just turn up and start doing the job and no one questioned it? Was she captured along with Vanis, but no one thought to search her for hidden rebel documentation, and no one thought to memory wipe her? Some kind of context would definitely be welcome, but isn't given.

And another question about Ellie, she seems to be armoured to resist Blaster Bolts! Wait a second, this is even an option? We've seen K2-SO resist multiple shots in Rogue One, but every other droid we've seen, even Battle Droids, are all destroyed easily with blaster fire. Since when can droids be made into walking tanks?

Oh, and just a mention. Luke's got his Lightsaber back in this issue, although it does resemble his one from Return of the Jedi, so I suppose this issue may be set after he builds that one.

So what do you really think ? : All the faults in this issue are forgivable, it tells a wonderful little tale which hooks their current quest into Return of the Jedi, and provides a unique emotional story, with Ellie and her brain damaged master providing a gut punch straight to the feels at the end.

Final Words : Well, I mentioned last time that this story leads straight into Return of the Jedi, but that the movie isn't being serialised as part of the main comic, but instead was released as a set of specials.
I had considered covering them next, as the comics jump straight into stories set after the movie, with Han Solo restored to the heroes, and Vader and he Emperor deceased.
But I've finally decided against that, and I'll be covering issue 81 next time, and we'll return to the specials, including Return of the Jedi once I've covered all of the main series, as at the moment that just makes sense to me rather than trying to cover the story chronologically.