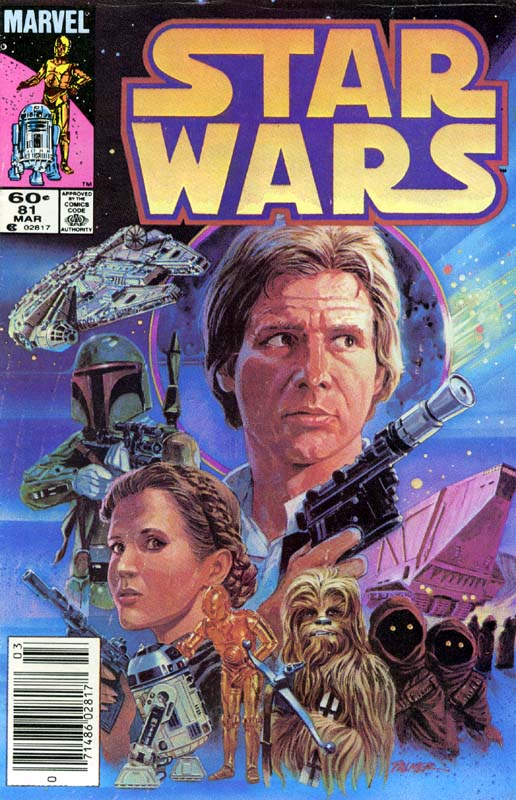 What is it ? : Okay, so we've skipped past The Return of the Jedi, and Han has been released from Carbonite, the issue picks up with him arguing with a Rebel pilot he'd borrowed money from when they were stationed on Hoth.
Leia offers him some money from her family riches, but Han feels that he's supported himself in the past so that shouldn't change, so he takes Leia and the Droids to Tatooine so he can retrieve money from a bank there. However the bank has Han listed as still frozen in Carbonite so won't release his money. Returning to the Falcon to get R2-D2 who may be able to connect to the banks computers to resolve the problem, they discover he has been stolen by Jawas.
Meanwhile the Jawas are out at the Pit of Carkoon where they discover the body of Boba Fett who has used his jet pack to escape, however the Jawa's mistake his armoured form for that of a droid, and load him aboard their Sandcrawler.
Han and Leia borrow landspeeders and follow the Sandcrawler, qand catch up with it as it's under attack by Sand People. Han boards the Sandcrawler to rescue R2-D2 and comes face to face with Boba Fett who is confused and doesn't recognise Han or even remember who he is. They rescue R2-D2 and as Han attempts to help Boba leave the Sandcrawler, Leia calls Hans name which triggers Boba's memory causing him to pull his blaster on Han and fire rather than be rescued. Han leaps free just as the Sandcrawler crashes into the Sarlacc, returning Boba to it's Maw.

High Points : While there's a lot here done for fan service, none of it comes across partilcularly well, with Han returning as the focus of this issue, a return to Tatooine, Boba Fett back from the dead for the first time, and loads of familiar things such as the Jawas, Sandcrawlers and even the Landspeeders that Han and Leia take, which are X-34's, the same model as Luke used.

Low Points : But it does come across as obvious Fan Service, as the story is pointless, with the core motivation for the action being a bank clerical error, it's got all the excitement of trade negotiations.
Boba returns and is put straight back into the Sarlacc without really doing anything, as he doesn't even know who he is until moments before the Sandcrawler carries him back into the massive creatures belly.
Also to make the story work, the Sandcrawler shown in this story is much smaller, and much faster than the ones seen before, instead of trundling slowly across the desert this one races out of control into the Sarlacc, and is small enough to fit into the beasts mouth.

I must also question Leia's presence in this story, we're days after the Battle of Endor, and the defeat of Darth Vader and the Emperor, and Leia Organa one of the top Rebel leaders is off helping her boyfriend do his banking rather than organising the future of the galaxy . . . .

So what do you really think ? : I wasn't impressed at all I'm afraid, the story is fairly stupid (Han needing money to repay debts), Boba's inclusion isn't really explained, and is fairly pointless (providing only dramatic tension for a couple of frames, rather than actually any real input into the plot), and it all just seems silly.

Final Words : Maybe they felt that the comic needed something light after the tension of Return of the Jedi, but this just feels childish and stupid.
It doesn't even hook into the comic storylines, with no appearance or mention of Arbra or anything else which has been going on, it would actually be nice if they'd used this issue to bring Han into those storylines rather than this mess.

It does have a very pretty cover though, but even that doesn't have anything to do with the contents.