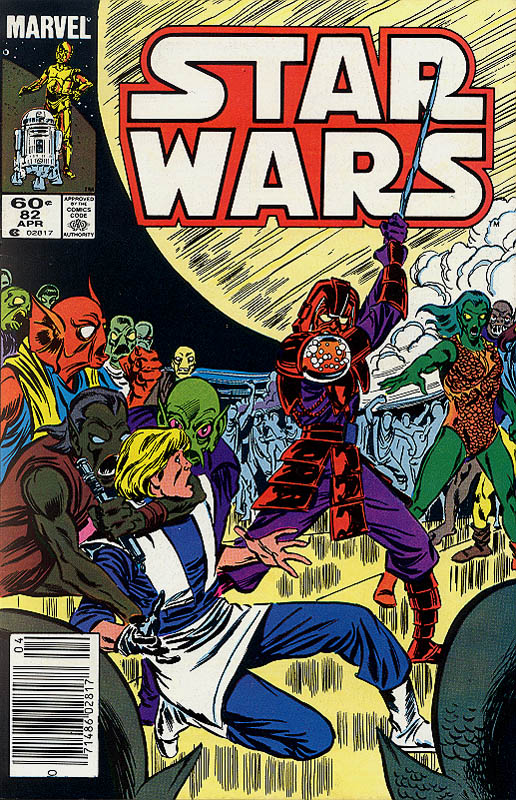 What is it ? : Luke is training his Jedi skills against the hunting skills of the Ewoks on Endor, when Admiral Ackbar visits him. He tells him that although the Rebellion has ended, the Alliance hasn't, and that they want to start forming the Alliance of Free Planets, a new version of the Republic.
To this end, he wants Luke to take Plif to Iskalon to try to bring the Iskalonians into the new Alliance. Luke takes Plif in his X-Wing, arriving on Iskalon, but discovers an alien vessel landed at the ruins of Pavillion. Landing he discovers this vessel belongs to Rik Duel, Chihdo and Dani who are scavenging from the wreckage of the destroyed city.
They come under attack from a Chiaki, and then later from Iskalonians wearing water tanks, who only cease their attack when they realise that it's Luke.
Plif and Luke try to convince Mone, who has taken over as leader of the School after his father Primor's death, but Mone continues to not want any contact with the outside world. He asks Luke to give Lando a message, that the memories of more innocent days with him brings Mone comfort, but Lando should never return to Iskalon.
Kiro argues that he wants to learn from Luke and see what the Galaxy has to offer them, but Mone tells him if he leaves he will no longer be part of the School. But Kiro equips himself with traditional a Iskalonian water and asks Luke to take him from Iskalon. Luke agrees, but doesn't have room aboard his X-Wing, so gets Rik Duel to agree to carry Kiro from the planet. As they leave, the Iskalonians ask of Mone whether Kiro will not miss them, to which he replies only as much as they will miss him.

High Points : The comics have definitely built themselves a lovely little self contained universe of Star Wars tales here, with Plif, Rik Duel, Dani and Iskalon returning again and again, building more history and storyline each time, which is something that I'm enjoying.

I especially enjoyed using Plif as an ambassador of his people helping to invite other planets to join the fledgling government of the Alliance of Free Worlds. The usefulness of having a telepathic ambassador would be countless.
I'm guessing the next few issues will be returns to the various worlds who have helped the Alliance throughout the comics as they build their new government, which given the movies were over, is extremely nice to see. It would have been very easy to just keep the stories going, introducing some new Imperial Admiral, and having the heroes face off against him and his forces issue after issue. But instead we're getting some real world building going on.

Low Points : I'm a little confused by the reasoning given for Luke to go on this mission alone, while most of the characters are given valid excuses, they say that Chewbacca learning the Hoojibs language, but given that the Hoojibs are telepathic that excuse makes no sense. Unless they've become a little confused and they mean the Ewoks, which given their location on Endor makes a load more sense.
But this gives the feeling that this story was originally set on Arbra, and then rapidly changed given the events of Return of the Jedi to use Ewoks and Endor at the start.

And while I enjoyed the return to Iskalon, it does feel a little fresh, wasn't it only a couple of issues ago that they were last here, and it just feels a little repetitive of the end of that story with them attacked by a Chiaki, and then banished by Prince Mone.
Even Dani, Rik and Chihdo feel a little repetitive, Rik attempts to con Luke, Dani flirts with him, etc, etc.

So what do you really think ? : For my criticisms, I quite enjoyed this tale, and hopefully they're going to take the building of the alliance further and further, even if I am concerned that the stories are being rewritten at the last second to incorporate elements of Return of the Jedi changing them from elements of the comics.

Final Words : I'm also a little concerned that the end of this story it tells us next issue will be "Still Active After All These Years", but looking at the titles of upcoming issues that story won't be told until issue 87. Does that mean the issues in between are all filler tales, ignoring this continuing plotline? Or did they extend the storyline as they thought of more tales to tell? I guess I'll find out next issue.