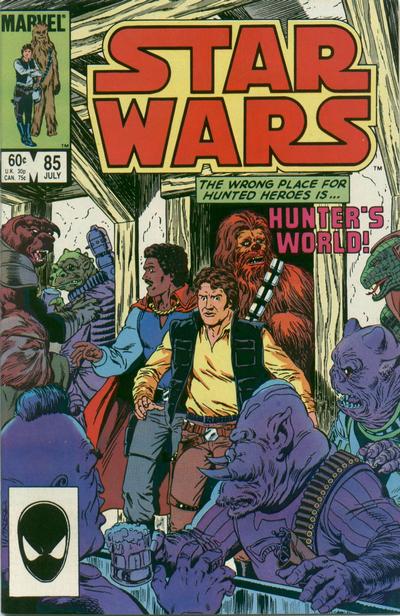 What is it ? : Lando and Han are gambling with Ewoks, when they are summoned to a meeting, where they are issued new missions to invite planets to join the Alliance of Free Worlds, however Admiral Ackbar, and Mon Mothma also issue a proclamation that Captain Drebble is to be heralded as a hero of the Alliance for the heroic actions that have been reported.
Lando is embarrassed as he is aware that it was him using Drebble as an alias who performed those actions, but he doesn't feel able to inform anyone of this.
Han, Chewbacca and Lando arrive on the world of Keyorin, the "Hunter's World" and Han fast talks the boss of that planet into attending the meeting to form the Alliance of Free Worlds.
They make their way to a local cantina, but Lando is spotted by the real Drebble, and Han is recognised by a member of Lemo and Sanda's gang and the group flees back to the Falcon, where Drebble's bounty hunters stun them. Han and Chewbacca are handed over to Lemo and Sanda, and Drebble takes Lando.
Under interrogation, Han mentions Drebble, a name which Lemo and Sanda recognise, and Han explains that he has the statue they desire, so they set off after Drebble and Lando, while Han and Chewbacca manage to escape and pursue.
Drebble discovers the recording recognising him as a Hero of the Alliance, and is impressed, as such a large and powerful organisation giving him an award carries much status. But Lemo and Sanda arrive, and Lando talks Drebble into teaming up against these double crossers.
While Lando and Drebble distract the gang members, Drebbles Stenax bodyguards fly in behind them ambushing them at the same time as Han and Chewbacca arrive. They award Drebble the Statue that Lemo and Sanda were searching for as a "reward" from the Alliance, leaving behind a tense situation between the two sides as they leave.


High Points : While it's been building nicely towards this, with Lando repeatedly using Drebbles name when he was on missions in previous issues in the hope that Drebble would be blamed. And it nicely rebounds on him, with his heroic actions being reported back to the Rebels and credited to Lando's adversary.


Low Points : However, what could have been an interesting tale of Drebble awkwardly being hailed a hero of the Rebellion working side by side with Lando, with both of them too embarrassed to admit the truth, is just a bit of a farce. There's the reintroduction of Lemo and Sanda, who personally I thought had died at the end of their particular story as it seemed there was definitely going to be a gunfight over the Statuette that Lando had left behind. But the two come across as having no personality or plot line, outside what was revealed before.
Bossk and IG-88 are both in this issue, and don't really have any input to the storyline at all, with IG-88 acting very peculiarly, saying "Congratulations Sir!" upon Drebbles award of Hero of the Alliance, which seems out of character for a bounty hunter droid.

I'm also baffled as a large point is given to the early part of this issue that one of the reasons that Han and Chewbacca accept this mission is that Keyorin is close to Kashyyyk, and therefore Chewbacca can visit his wife and family (which led me to await the return of Malla, Itchy and Lumpy), but it's soon forgotten about and never mentioned again. I thought for a moment that it was going to be used to remove Chewbacca from the story, with him away with his family while Han and Lando have adventures, but nope, it's just completely forgotten about.

So what do you really think ? : Definitely not one of the best issues of the Marvel series, there's just lots of running around, acting illogically just for the few laughs it can muster, and generally not making any sense whatsoever.

Final Words : Given how long they spend building up to this story, with Lando using his Drebble identity many times, it's really pretty disappointing how this story ends up. I can think of many superior ways they could have used Drebble and his false heroic identity. I even kind of wish for a story which didn't have the heroes in it at all, just featuring Drebble finding out about his new status as Hero of the Alliance, taking advantage of it, and then suffering inconvenience from Lando's activities with Lemo and Sanda and the Empire on Gamandar.
At first loving the status, and forgiving Lando, but later as he's inconvenienced, it turning to hate once again.