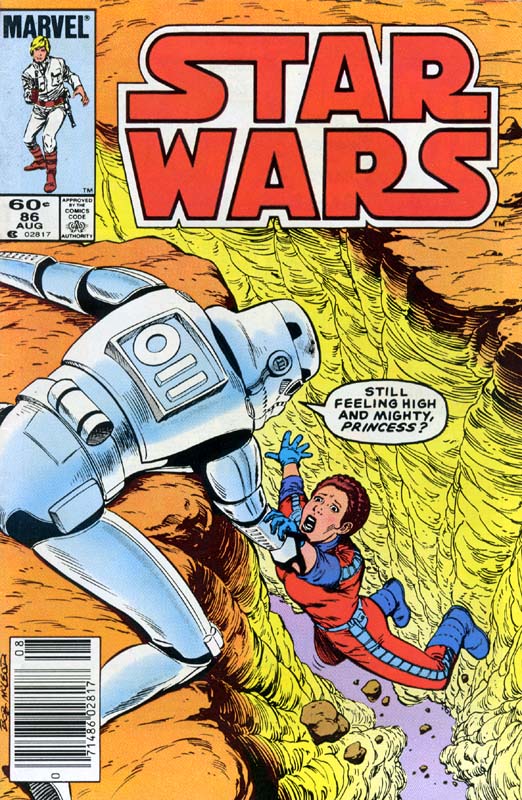 What is it ? : Princess Leia is about to leave for a mission to Yinchorr, in this story set before Return of the Jedi. Luke tries to convince her to take a blaster, but she tells him that she needs to display that the Rebellion is different to the Empire, so showing her trust in the people by going alone and unarmed is important, but he does convince her that taking an emergency beacon is only prudent in case of emergencies.
She boards a Yinchorri Shuttle and they take her to that planet, whoever as they begin to land, they summon a Tie Fighter escort, and her pilot reveals that the Empire has taken the Yinchorri ruling council captive only to be released in exchange for her.
However the Empire reneges on the deal, attempting to shoot down and destroy the vessel with Leia aboard. She mans the guns and they fight the Tie Fighters, causing them to crash, but only after taking heavy damage and crashing themselves, as Leia triggers her emergency beacon.
She awakens to discover a Stormtrooper pulling her out of the Wreckage, he is one of the Tie Pilots who crashed, who reveals himself to be from Alderaan.
They are attacked by large creatures, and manage to fight them off together, al the while debating the morality of the Empire, and of the Rebellion. He blames her fathers rebellion for what happened to their world, that he could have easily stopped his political posturing and spared the world from the attack by the Death Star. And he considers her a spoiled pampered brat, who cared nopthing for the people of Alderaan. She argues that the dream of something better than the Empire is what her father gave Alderaan, and that dream was worth fighting for, with the real crimes done by the Empire.
He shows her a fragment of rock on a chain around his neck, which is a remnant of their homeworld, and he refuses to take any responsibility for the Empires actions or his support of them, stating simply that he's just following orders.
They rendezvous with the Imperial forces which have been tracking the radio in his helmet, and the Imperial governor is going to put Leia to death when the Falcon arrives to rescue her, the Alderaanian Stormtrooper saves her from the governor, giving her a chance to reach the Falcon to flee, and then asks to join the Rebellion, to which Leia agrees, but as he leaps for the entry ramp he is gunned down by another Stormtrooper, and Leia reaches for him, catching only his chain and attached piece of Alderaan.
And as they soar away, she looks at the stone, grieving for another Alderaanian who has given everything up for the dream of freedom.

High Points : Wow, this is a really solid story, with a good emotional punch to it. The reveal of the Stormtrooper as being from Alderaan is great, and his dissatisfaction with that worlds monarchy and their rebellion against the Empire, which in his eyes led to the destruction of the planet is great.
It's a completely understandable position, of whether fighting and sacrificing for your ideals is the right thing to do, especially when your destruction will take down untold millions along with you who have no choice in the matter. Which is more important, people's lives, or people's standards and ideals?
The Stormtrooper in this issue really stands his ground well in this debate, as action rages on around them as they flee the danger of the Yinchorri wilderness, and the fact that he remains nameless throughout adds to the power, as he sees himself as representing the nameless who died for the Organa families rebellion.

Low Points : That said, the Yinchorri plot to hand over Leia does seem really short sighted, as the Empire obviously has no plan of keeping to it's end of the deal, and the fact that Yinchorri space is known to be heavily trafficked by the Empire, but the Rebellion is fine with sending one of their leaders unarmed and unescorted into this area.

And o show how good this story is, I'm reduced to complete nitpicking here to find fault, as I now must comment that the antagonist of this story, the Alderaanian Stormtrooper, is the Pilot of one of the crashed Tie Fighters? Wait a second, shouldn't that be a Tie Fighter Pilot? I'm willing to forgive the comics a lot, as we didn't have the abundance of materials fleshing out the galaxy. But in this case not, as Tie Fighter Pilots were clearly seen in the movies, and had even had their own action figure release, so were a well known and documented feature at this point.

So what do you really think ? : I really enjoyed this issue, it deals with some powerful ideas and really is a level above the usual Marvel comic fare. And while it removes any moral ambiguity by the end of the issue, with the Stormtrooper being totally convinced of Leio and the Rebellions high ideals, it does actually allow these to be questioned for a while.
I think the idea is beyond what a comic mainly aimed at children would normally consider, so it's wrapped up nice and neat with Leia proving herself, and the antagonist coming totally around to her point of view.
But I admit I would have loved to see Leia question herself for a while, if only she'd been willing to sit quiet and ignore the Empires atrocities, millions of deaths and the destruction of her homeworld wouldn't have happened. Is being morally right really that important. . .
But as I've said, this is mainly a kids comic, so having the heroes question themselves like that would definitely not be age appropriate, or even interesting to the target market.

Final Words : The author of this comic went on to write Star Wars for Dark Horse comics, publishing the amazing Crimson Empire among others, but this was his only Marvel story, as he felt that they were too childish, especially refusing to write anything about the Hoojibs, who he considered to be telepathic bunnies.