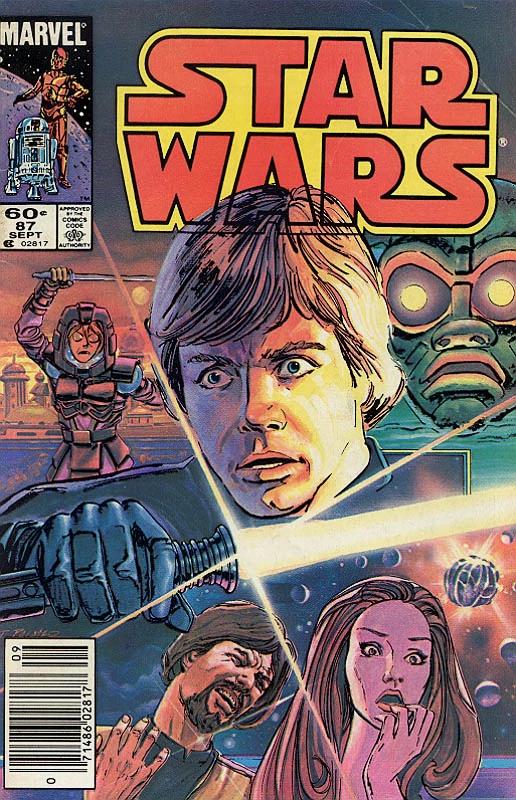 Marvel Star Wars Issue 87: Still Active After All These Years

What is it ? : Following on from Luke, Kiro, Dani, Rik, Chihdo and Plif leaving Iskalon a bunch of issues ago, they arrive on the world of Shawken where they are welcomed.
Luke is surprised that the Empire has abandoned the world so easily, but the representative remarks that many invaders have come to Shawken, and they all leave eventually, that the Empire heard of the Rebels coming and retreated in disarray after hearing of the Imperial defeat at Endor.
Not wanting them to become bored with political negotiations, and disrupt them, Luke arranges for Rik, Chihdo and Dani to tour some recently uncovered archaeological diggings, fully expecting them to rob the place.
As the negotiations continue, Kiro is disturbed that the trio might disobey Lukes commands to not cause trouble to sets off to the archeological dig where the three are preparing to remove some of the art from the dig.
The Shawken ambassador explains to Luke how the ancient Shawken had the ability to manipulate energy to a much greater degree than anyone else, so Plif can feel free to feed on whatever energy he wants.
Kiro lectures Rik, Dani and Chihdo about disobeying Luke, and Chihdo takes a shot at him with his blaster, the scuffle activates a trap in the dig trapping them all.
Lukes negotiations are disrupted as the Shawken reveal that the trap has not only shut the four in, but has started an energy build up the like of which they've never seen.
They set off to the ruins, and Luke and Plif rescue the four, but the Shawken representative reads the writings on carvings and reveals that the ruins are actually an ancient weapon. That one of the ancient Shawken believed that the universe had gone so wrong that the only choice was to destroy it and cause a new big bang to start off again.
This weapon will destroy Shawken, and lead to a chain reaction destroying planet after planet and star system after star system until everything is gone.
Luke and Kiro head down into the workings of the device to stop it, but find a last line of defence, in the form of an underwater cavern. Kiro takes Luke's lightsaber, removing his armour and swims through, destroying the device and the power goes out leaving everyone in the dark.
The others see a glow approaching, and Luke emerges with his lightsaber and carrying Kiro, who he believes has sacrificed himself, however Plif senses stirrings of life deep with him, giving them some hope.

High Points : It's nice to see the gang again and get back to this storyline, and great to see the continuing build towards the formation of the Alliance of Free Systems.
And the basic concept of an advanced people who are so non-violent that their history is just invasion after invasion, leading to one of their ancient scientists coming to the conclusion that they should destroy the universe as it's so broken, and start again, is a pretty amazing one.

Low Points : But so much happens for no real reason, the trio of Rik, Dani and Chihdo and just thieves for the sake of the story, rather than take advantage of their connection to Luke for profit, they instead decide to prize artwork off the walls of an ancient archeological dig for profit. Chihdo shoots at Kiro for lecturing them, which sets off the device, but no one questions the fact he just tried to murder a comrade.
And rather strangely, they make Kiro appear evil for a moment, as he takes up an aggressive pose upon taking Luke's lightsaber and declaring it "what I'm after", only to reveal that he only means because Luke cannot swim as well as him.

I also have to question the concept of the Shawken, a people so advanced they can destroy the entire galaxy (if not universe since they intended to cause another big bang), but who are never really mentioned elsewhere. They're technology certains puts the Death Star, Starforge and other superweapons in scale


So what do you really think ? : Although the story and character actions don't really hold up to any scrutiny, it's still an enjoyable read. And much of the criticism of the Shawken being this super powerful race which we've never heard of before is actually balanced by the idea that the ancient scientist who made the superweapon, just didn't make one that worked. After all he was crazy enough to think the universe should be destroyed, so maybe he was crazy enough to think a bag full of badgers could destroy the universe, so his weapon was complete junk. It doesn't take away from the heroic action to deactivate it, just in case, but it does make the Shawken make a lot more sense on a galactic scale.

Final Words : After making us wait so long for this story, it was a bit of a let down. I guess we're probably going to have to wait another half dozen issues to find out Kiro's fate.