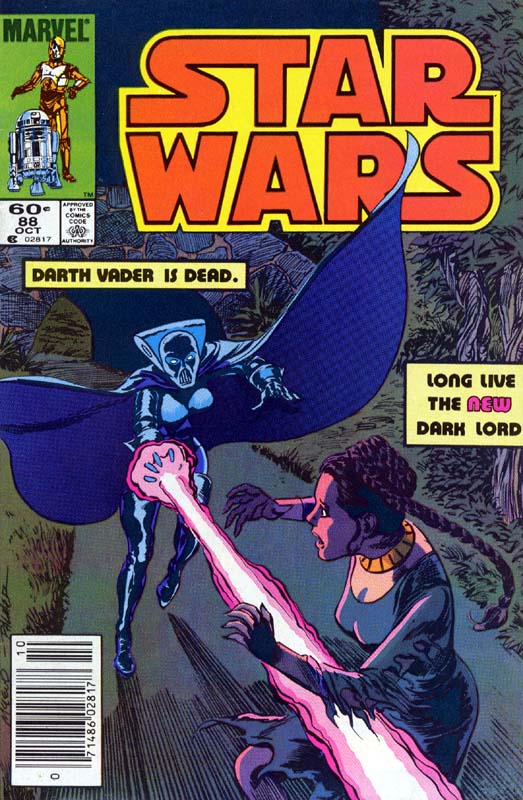 What is it ? : Leia and Mon Mothma are visiting the world of Herdessa discussing it's financial success and bringing the world into the Alliance of Free Systems. Leia is targeted by elements within the crowd who fling mud at her, and the Herdessian Guild's tell her that their head of security, a Cyborg named Lumiya will get to the bottom of it.
Leia witnesses Lumiya capturing those that threw the mud, and hears them claiming that they are likely to be put to death for the crime, Leia asks for the crime to be forgiven, but both sides react negatively. Those that threw the mud cannot believe that a pampered princess isn't mocking them and doesn't have ulterior motives for setting them free, while Lumiya refuses interference from an Alien element.
Leia helps the pair escape from Lumiya, following them back to their Rebel HQ, where she tries to convince them that she isn't like the royalty on their world, but the Rebels cannot believe her until Lumiya and the security forces attack, and Leia helps fight against them, escaping along with some of the Rebels. The guilds take Mon Mothma and the Alliance delegation prisoner as well.
Lumiya begins threatening to kill the prisoners unless Leia surrenders herself, so Leia attacks, a lucky shot destroying one of the Cyborgs power packs, allowing the people of Herdessa to rise up and overthrow the guilds.
Watching from nearby, a damaged Lumiya promises that Leia will soon know how powerful a foe she really is.

High Points : I'm going to give the writers credit here for trying to tell a very interesting story, with the working class rebellion on Herdessa not believing that an aristocrat like Leia could be one of them, and the introduction of Lumiya, teasing on the cover, if not within the pages, that she is Vaders replacement, the new Dark Lord.
And as Vaders replacement, Lumiyas design does resemble Vader quite well, with the black suit and triangular mouth piece, even if the helmet is inverted, she does look the part.

Low Points : But while the ideas in the comic are solid, it's a bit of a messy implementation of them, with Lumiya serving in a subordinate role to the guilds of Herdessa, which seems an inauspicious start for her.
The Rebels on Herdessa, while entertainingly skeptical of Leia's support of their rights, are put in an antagonistic role to her, which doesn't make them feel much better than their oppressors, as we know that Leia will help them if they let her.
It also feels that their arguments that she can't possibly understand their problems from her privileged position, might possibly be balanced with the argument that her entire world was lost to the Empire, so perhaps she has experienced sacrifice for the cause, but Leia is never given the chance to make this argument.

So what do you really think ? : While interesting concepts exist within this issue, it's a little too rushed with both the introduction and conclusion of the Herdessa plotline, and trying to take the time to introduce Lumiya as a long term opponent.
They also seem to be setting Mon Mothma up as an antagonist towards Leia, with her preaching to Leia about her diplomatic skills, and making Leia question her leadership role within the Alliance.
Something which doesn't feel quite right, as in all other media the heroes of the Rebellion, Luke, Leia and Han are given an almost mythical status within the Rebellion, as their adventures inspire the forces as an example of bravery and friendship that the Alliance represents.

Final Words : The Marvel comics continue to present interesting stories, forging forwards into the Post-Endor situation and giving an interesting glimpse into what was once canon.
Where it would have been easy for them to have kept producing stories set during the original trilogy of movies, perhaps even filling in the gaps that their own comics have created, such as the move from Yavin IV to Hoth, something which happened between issues in the comics. What they've done is move beyond the movies into the formation of the Alliance of Free Systems, and the creation of an alternate New Republic (although I bet it was retconned somewhere before the Expanded Universe was made Legends).