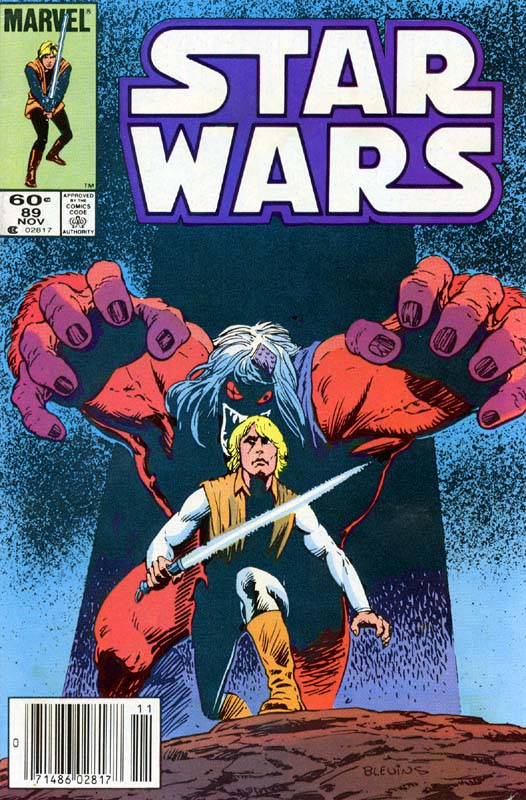 What is it ? : Luke is on the world of Solay aiding the Rebel groups there overthrow the government of the world which is backed by the Empire. As the Rebels storm the Royal Palace However as they capture the palace, the leader of the Rebels, Raggold is struck down by a blaster bolt, and with his dying words tells Luke he was killed by a traitor.
The Rebels capture the palace, and Luke witnesses the capture of King Blackart, and watch as the Rebels remove his crown declaring that the government will now be ruled by the many. Luke finds the new leader of the Rebels, Mary to be beautiful, and although he is annoyed when he sees the Rebels celebrating rather than fortifying their positions and rebuilding, his position is softened by Mary who argues that the celebration is deserved.
A week later and the celebrations still haven't stopped, and Luke witnesses some of the Rebels looting and pillaging, but although he remains concerned that the Rebels haven't begun building, his infatuation with Mary leads to them slipping away to spend some time together.
However an Imperial fleet emerges above the planet, bombarding it and Mary is hit by the attack, Luke watches as her unconscious body is plundered for valuables by the Rebels who are now panicking and rioting, and by the time he reaches her she dies, asking him with her final words to hold onto the promise of freedom. Chaos breaks out across the planet, as everyone takes advantage of the last few hours of freedom before the Empire moves in to take control.
Luke is determined to find the killer of Raggold, and whoever has allowed Mary to die, and encounters a young thief who attempts to steal his lightsaber, called Scamp.
After being caught, Scamp tells Luke that the revolution had always been a scam. An Imperial Governor had financed the revolution to overthrow the monarchy so that he could step in and reconquer the world easily. Everyone had been set up for a fall, and the traitor had been the only one to profit.
He leads Luke to a Rebel who has profited from the situation, and Luke uses the force to threaten him, and he reveals that there was always a spy within the Rebels, and that Blackart has escaped and is trying to make his way offworld.
Luke catches up with the ex-king at the spaceport, who reveals that the Empire has set him up for a fall, and he would kill the traitor too if he could.
Luke feels the pull of the Dark Side with his desire for Revenge, but Scamp suggests going to a local information dealer, Braxas, who makes Luke pass a test, eating from a bowl containing a venomous scorpion using chopsticks and his not prosthetic hand.
Luke passes the test, and Braxas hands over a security recording of Raggolds death, which reveals that Raggold was the traitor, taking money from the Empire to overthrow Blackart, knowing full well that the Empire itself would swoop in and seize control afterwards. Wracked with guilt, Raggold had committed suicide at the conclusion of the battle. Luke, shocked by the revelation, and he resolves to abandon his attitude of revenge.
Luke and Braxas escape Solay in Luke's shuttle, but Luke resolves to return to Solay someday to complete the work that Mary and Raggold had started.

High Points : An interesting story of a planet seeking freedom from the control of the Empire backed government, only to end up being seized by the Empire itself. The story starts in the heart of the action, with Luke helping capture the palace and free the world, but it's not a story of heroic rebels against the evil Empire as usual Star Wars stories are.
The Rebels on Solay are flawed from the top down, their leader Raggold was taking bribes from the Empire to overthrow the Blackart government, and we see the Rebels taking the advantage to loot and plunder for personal profit, and rather than working to build a new government, they are happy to just celebrate since no government is forcing them to toil away any longer.
We also glimpse the life of Scamp in a scene, where he is forced to go out and steal to feed his brothers and sisters by his abusive father.
This makes the story far more interesting, and it makes Lukes decisions quite interesting as well, as he edges close to the Dark Side, frustrated at the lack of decency he sees around him he begins to lash out in anger.
Even the ending, where he seemingly abandons Scamp and his family, who may be criminals, but are children so are redeemed slightly by youth and not knowing better, to the oncoming invasion by the Empire.

It's also refreshing to see a rebellion fail, the comics are obviously aimed at a younger audience, so we usually see the plucky rebels triumphant in their fight against the evil Empire, but this time they fail, and they weren't even that plucky.

Low Points : Once again the story comes across as a bit rushed and confused as they're packing a lot into the story and we suddenly get revelations or things get forgotten and never mentioned again in the rush.
For example everyone just realises the plot by the Empire to use the Rebels to remove the government of Solay so they can seize control, without it being revealed in a sensible and clear manner. The people of Solay panic at that moment, supposedly rioting and taking advantage of the last few hours of freedom, but it's never really seen again as life continues normally on Solay.
And although I kind of saw it as an interesting take on Luke abandoning Scampm and his family, it actually seems more like they're just forgotten about by the writers in the last few scenes of the issue.

So what do you really think ? : A strong story which is let down somewhat by it's rushed telling, the entire love affair with Mary seems to exist only to give Luke something to be angry about later, and to distract him while the Rebels fail to fortify the world and be in any position to deal with the Imperial counterattack. Scamps family situation is only revealed to redeem the thief a little, but then is promptly forgotten as Luke abandons them to the oncoming imperials.
But despite that, and interesting and very readable story.

Final Words : While it's a bit of a disappointment that they don't take advantage of all the ideas they introduce, the fact that all those ideas are in here at all is wonderful.