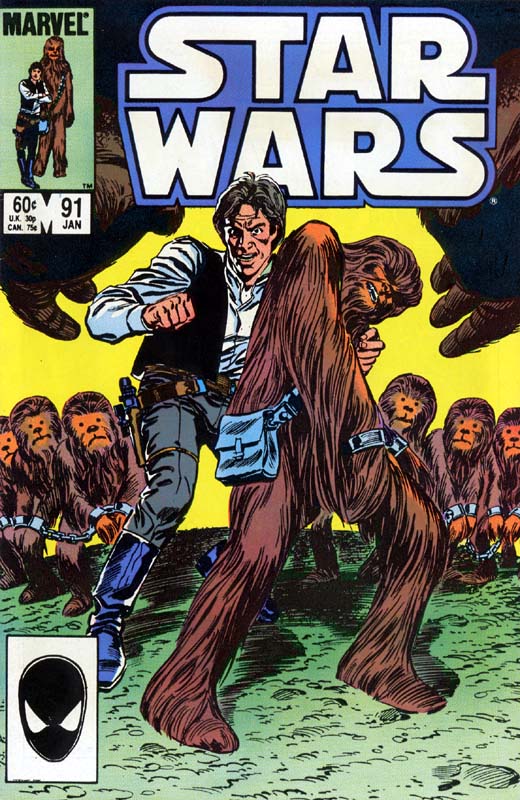 What is it ? : Lando, Han and Chewbacca are visiting Kashyyyk so Chewbacca can see his family, but they are made to land some distance from his home. As they travel to his home, Lando notes that the Wookiees don't seem to be happy about their liberation from Imperial control and slavery, but they take it to merely be hostility towards humans who make up much of the Empire.
Chewbacca finds his way blocked by an alien man called Knife who acts hostile to him, but when Chewbacca growls, the man reveals that he has a companion in Vargi, Chewbacca's brother-in-law.
They all go to Chewbacca's home, which seems to be abandoned, and Han is unsure what to make of Knife, or even what species he is. Then Chewbacca's son, Lumpy arrives, but before the heroes can react, three other Wookiees snatch him up wielding guns, and Knife's group takes the heroes captive, revealing that since the Empire is gone, they're taking over the Wookiee slave trade.
Knife reveals he also has the rest of Chewbacca's family, and intends to parade Chewbacca into slavery to show the Wookiees that even their greatest hero must obey, leaving Han and Lando chained up.
Han and Lando escape, and Han follows Knife while Lando goes back to their ships for weapons. Han frees Chewbacca, but they are noticed by Vargi who attacks, and because of the danger to his family, Chewbacca doesn't resist taking some hits before Han leaps in to protect his friend, but takes a beating from the massive Wookiee.
Lando arrives with weapons, and the Wookiees rise up against Knife and his slavers, but in the chaos Knife disappears, and they notice Landos ship leaving, obviously stolen by Knife, and Han promises to track him down for revenge.

High Points : This is a really solid story, and after me complaining last review about the long wait for the introduction of the Nagai and the storyline I've been told about for so long, here's the start of it with Knife being a Nagai trying to start the Wookiee slave trade again.
And Knife is a very effective villain, cool and in control of the situation for most of the issue, having taken Chewbacca's family captive he knows that the heroes can't act against him. And his plan to parade Chewbacca around to despirit the Wookiees does seem solid.

And although some would challenge this, I actually found it nice to see Lumpy, Malla and Itchy all back along with the designs for Kashyyyk from the Star Wars Holiday Special.

Low Points : The use of Chewbacca's brother-in-law Vargi at first seems solid, and I assumed that his servitude to Knife was also due to the captivity of Malla, or his own family, but instead it seems as if he's just bad. We get no fleshing out of the character, just the fact he's a Wookiee which seems fine with the slavery of his own species. I'd definitely liked to have seen some reason behind this, but we get nothing.

Knife's plan also seems weak in that he leaves Han and Lando chained up, rather than guarding them properly, or parading them around along with Chewbacca (since they are famously friends of his, showing their powerlessness might help break the Wookiees spirits further), but instead for plot reasons he leaves them behind so they can escape and stop his plans, it's just a little convenient.

And just a minor niggle, Kashyyyk is spelt "Kazhyyyk" at the beginning, not sure if it's just a typo, or whether the planet name was yet to be set in stone.

Oh, and at the beginning of the issue, Chewbacca is hostile towards Lando for landing his ship far from Chewbacca's home while they were following him, even though that was where he was directed to land by flight control. I'm not sure what this scene is supposed to be doing, as Lando doesn't seem to have done anything wrong, and Chewbacca's reaction doesn't seem to have any sense to it.

So what do you really think ? : A great story, nice to see the Holiday Special included in the Marvel canon, and a brilliant introduction for Knife and the Nagai, making a really solid antagonist who the reader can really hate.

Final Words : After a particularly weak issue, it's great to see a return to form, and that all of the hype I've been told over the years about the Nagai, may very well be true. I've looking forward to seeing more of them.