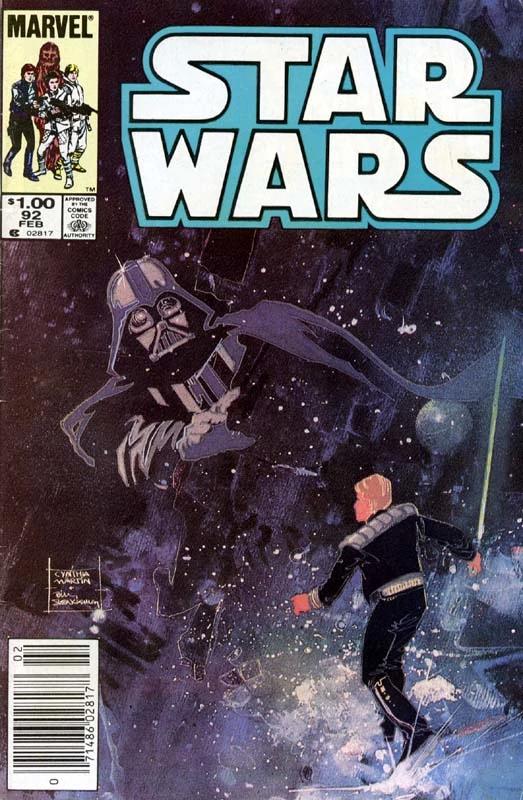 What is it ? : Luke dreams of fighting Vader, his lightsaber non functional, and the dream ends as Vader is about to remove his helmet. He then attends a meeting by Admiral Ackbar who is assembling information from across the galaxy about still functioning groups of Imperial forces, and the return of the slave trade, but he is distracted by thoughts of his dream.
After talking with Leia about their father, he returns to his duties which is training a group of recruits, although he still refuses to teach anyone in the Jedi ways. Afterwards he falls asleep once more again dreams of Vader, but is suddenly awoken by alarms that the Rebel base is being attacked, a single fighter is evading their fighters, but Luke senses it means no harm, so they allow it to land.
The pilot, Denin, has come to demand help from the Alliance as his world is under attack by the Empire, and he also demands Jedi training from Luke, who continues to refuse even though Denin shows knowledge of Yoda.
Leia puts Denin's request to Admiral Ackbar, which is refused, and she comments to Luke and Han that she feels excluded from the leadership of the Alliance, and Luke and Han confirm they are feeling the same thing. However, Leia also suggested that the group go with Denin to help out, and Ackbar has agreed to that. They take one of Lukes students with them, Barney, who talks about wanting to be a Jedi just like Denin, but knows of the lure of the dark side, as when he set off from home he had a friend, Flint, who wanted the same, and when he was turned down by Luke, he had joined the Empire and sought out training from Vader himself.
They take off in the Millenium Falcon to travel to Denin's world, and Luke dreams once again, but this time of Yoda and Obi-Wan, his fear of Vader is removed, and he realises that he's actually been dreaming of another dark sider in ornate armour who needs unmasked but his mind was just making it look like Vader.
They arrive at Denin's planet, where they are attacked by Tie Fighters and the Falcon is forced down, where they witness that the world is devastated by war. Splitting into groups, Leia, C-3PO and R2-D2 access computers, where they discover files which reveal that Prince Denin was killed two years ago, so the Denin with them is an imposter.
Luke, Denin and Lando are ambushed by Stormtroopers led by a Dark Sider wearing the ornate armour from Lukes dream, who is revealed to be Flint, from Barney's story. Luke distracts the Imperials, while Denin and Lando retreat to the Falcon, where Leia confronts Denin over his real identity, and he reveals he's actually a she, Denin's twin sister, Vila. She reveals she never really believed in anything except her brother, so when he died she took his place to keep up his ideals and desire of becoming a Jedi.
Luke and Flint duel while Flint rages about Luke not training him, revealing how he had a close relationship with Vader and Flint manages to injure Luke after Luke reveals that Vader was his father and turned back to the lightside at the end.
Barney arrives with the others, and talks to Flint, reminding him of why they'd wanted to learn to be Jedi, and Flint begins to soften. But a Stormtrooper seeing his commander begin to turn, fires at Flint, but Denin/Vila leaps in the way and dies.
This sacrifice completes Flints turn away from the Dark Side, and he activates a self destruct on the Imperial forces, freeing the planet.
Meanwhile in the dreamworld, Vila sees her brother, who tells her that he's been waiting for her, as they've got a teacher to train them, and they walk together towards Yoda.

High Points : Although the character of Denin does come across well, the story redeems him/her extremely well, and is a solid character arc across the issue.
The continuing storyline where Luke, Leia, Han, Chewbacca and Lando are all being sidelined by the Alliance is also coming together well, although I'm pretty surprised that they still think they're part of the leadership and that Mon Mothma and Ackbar haven't told them of their exclusion yet.

This issue also manages to portray a story spread over multiple days extremely well, with brief training montages with Luke and his students, spread between the various dreams he has, we actually feel as if time is passing and not everything is just happening on the same day, which can often happen in these stories.

Low Points : It's all a little self contained, we've gone from Luke two issues ago refusing to train Kiro, to him now training (but not in the Jedi ways) Kiro, Chihdo, Dani, Rik, some kind of lizard guy, and new kid (described by Han at one point as "black kid"), Barney. T
hen Barney gives us his back story about leaving his home world with a friend to learn to be a Jedi, but his friend taking the easy path and being trained by Vader.
And then Barneys friend turns up as the villain of the issue having been trained up to Luke's level by Vader, but never mentioned before.
So much of what's going on just seems to within this single issue, and to tell the truth I wouldn't be surprised if we never see Barney again even though he's now supposedly a student of Luke's. (although, since we see a reference to Flint and Barney's backstory coming from one of the annuals, it won't be the last I see of Barney)

So what do you really think ? : The story within these pages is very well told, even if it doesn't mesh well with the continuing storyline of the Marvel comics, although as mentioned before, this does seem to hook into a storyline from one of the annuals, which I personally haven't reviewed yet.
So maybe I'm being critical because I haven't been reading these in chronological order. . . .

Final Words : I don't know if this issue was written by a different team to the usual, the art style does seem different, so that might be why I'm definitely feeling as if they've brought in another team, who've created this story as a bit of a filler issue.