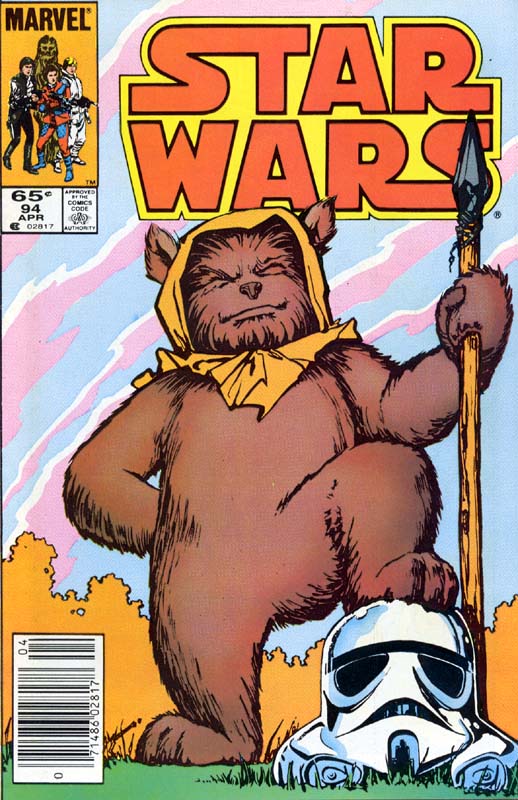 What is it ? : The issue begins with C-3PO fretting that he is the cause of all the trouble, apparently a Lahsbee has been found in an intimate situation with an Ewok Princess, this has caused the two sides to declare war. Each side also declares anyone who doesn't side with them as an enemy.
This is monitored by Hirog, a Hiromi posing as Admiral Ackbar's aide. He set the situation up, even down to C-3PO discovering it, knowing that he would tell others. And that the member world of the Alliance of Free Systems would be forced to take sides and this would split the alliance.
The heroes don't take this situation particularly seriously, with Luke attempting to get the Ewoks to train with him, something they refuse, then making the same offer to the Lahsbees, who accept then run in terror from his lightsaber. When they're finally convinced he means them no harm, they are attacked by Ewoks firing rocks from a catapult.
Lando decides that this is an affair of the heart so he sets up a duel between the offending Lahsbee, and the Princesses betrothed, which gets a little chaotic when the Ewok is far better than the Lahsbee at combat, but firstly the Lahsbee steals Han's blaster, and then one of the goes through puberty, becoming a Huhk.
During the chaos, Hirog, who is setting up a bomb, has his work destroyed, and the other Hiromi aboard a ship in orbit losing the signal from the bomb, abandon Hirog to his fate.
Both the Ewoks and Lahsbees have to work together to deal with the Huhk, leading to peace once more.

High Points : Errrm, there's not much to like in this one. I usually try to find one thing to like at least in anything, but I'm really struggling here, the storyline is so childish here it's ridiculous.

In fact the only redeeming feature of this issue comes from Dani, who takes a moment during the events of the comic to tease Leia about the events of Issue 77: Chanteuse of the Stars, where Leia had o sing to calm a Huhk. Telling her that although Leia wants to forget the story, it's one often told on Zeltron.

Low Points : I'm just kind of going to leave this one here because it's such a massive flaw in the story that it just kind of overrules all other complaints . . .

What's the Problem? Neither side in this war is space faring, and they don't live on the same planet?!?!?

So what do you really think ? : The artwork is pretty poor in this issue, and the design of Hirog and the Hiromi is amateurish and poor to say the least, nothing seems to be taken seriously in this issue, with even the heroes taking the supposed threat of the destruction of the Alliance of Free World and the outbreak of a new civil war to be a joke.
And if they think that, why is this actually a threat? I'm not sure what either of the two sides bring to the Alliance, the Ewoks are a primitive culture incapable of spaceflight, and the Lahsbees are children who occasionally turn into rampaging monsters and wreck the place. It definitely seems like both would be merely tolerated, rather than being members of the Alliance that could form such a connection with other worlds that they would declare war on each other rather than have both the Ewoks and Lahsbees declare them enemies?

How did Hirog get to be Ackbar's aide? He doesn't seem to be a particularly skilled infiltrator, and it's almost as if they'll accept anyone who turns up and asks for a key job.

Final Words : It feels as if this is more part of the Ewoks animated series rather than Star Wars, even the style of the cover looks more like that of that series.
There's nothing really to like here, the entire concept is flawed, and no one in the story really seems to be taking it seriously. We're less than ten issues from the end of the series here, and it feels as if everyone knows, and just doesn't care anymore.