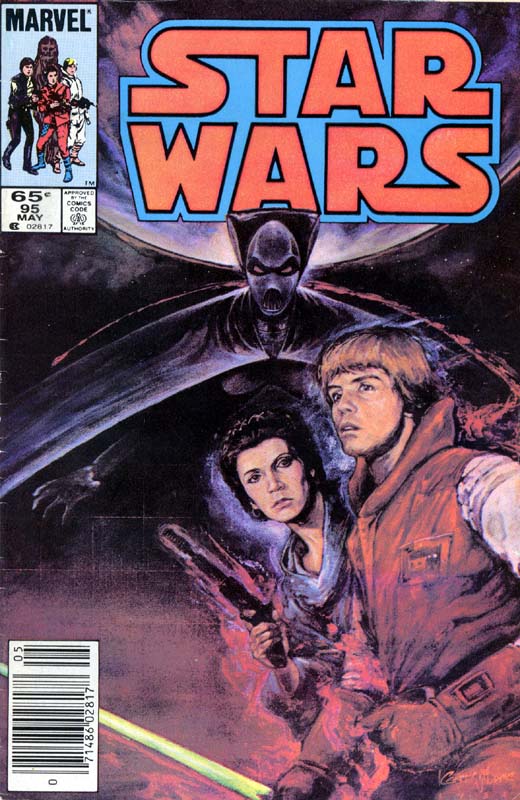 What is it ? : The story begins with The Dark Lady Lumiya interrogating a Alliance soldier, trying to get information about Leia from him, but he doesn't have that information instead offering up information about Luke to save his life.
Luke, Kiro and Dani have been sent to the world of Kinooine to investigate a missing Alliance team, who in turn were sent to investigate life signs which appeared and then disappeared from this deserted world.
Meanwhile, Han and Leia are being sent to Kabray to attend a meeting of the members of the Alliance of Free Worlds to assure them that the Alliance won't just be another Galactic Empire, and C-3PO is assigned the task of equipping both missions. Leia is annoyed that a team of 4 male Zeltrons have also been assigned to the mission, but Ackbar assures her there are reasons he can't tell her why the Zeltrons are important to the mission.
Arriving on Kabray, they discover that they have been given Luke's equipment for the mission, so Leia is wearing her Rebel uniform without any change of clothing, the 4 Zeltrons eagerly jump on the problem, finding an old dress and modifying it into their own particular skin revealing style, which isn't to Leias liking.
But without much choice she attends the gathering wearing it, a meeting where their group is stared at as they enter. They enquire as to what the problem is, but an aide states that all the prisoners have now arrived, Han quickly draws his blaster, but finds Knife, the Nagai he encountered on Kashyyyk already has him covered, and the group is put in a jail cell.
Meanwhile Luke, Kiro and Dani are scouting the world of Kinooine, when Dani and Kiro are ambushed by the Laser Whip of Lumiya, and Kiro manages to escape to warn Luke, but his faceplate is smashed and he is suffocating without water, but Luke finds a body of water to submerge him in, and finds out Dani has been captured. Heading off he comes face to face with Lumiya and begins a lightsaber vs light whip battle.
Back in their Jail cell, Han and Leia begin coming up with various plans to escape and fight their jailers, however the Zeltrons annoyed at being caged, begin attempting to escape, forming a human(Zeltron) ladder to allow one access to airvents, and sneak out to overpower the guard and open the door. Han and Leia have almost come up with a plan, when the Zeltrons rush out to begin an attack on Knife and the other Nagai who have taken everyone prisoner.
Joining the fight, the prisoners overpower and take captive the Nagai, with the Zeltrons showing the same enthusiasm for combat as they do for romance and hedonism. And Leia tells the now freed ambassadors that the Alliance will always come to their aid.
Meanwhile on Kinooine, Luke is seen sprawled on the ground, seemingly unconscious. . . .

High Points : Wow, what a difference an issue can make, this is an absolutely brilliant issue, taking the Zeltrons who have been very much a joke until now, and showing they have the skills and bravery to back their lifestyle up.
The dialogue from the Zeltrons was especially amusing, "I've never never blasted anyone before, But we've always wanted to try!" being a particularly fantastic threat from the Zeltrons to the Nagai, and their athletic style of combat, all done with a smile on their face, makes them particularly menacing and interesting.
Fighting is something that Zeltrons apparently will do even if they prefer more hedonistic activities, and they'll approach it with the same enthusiasm and they'll put the same amount of effort into it as they do with everything else they do. Making them somewhat reluctant, but skilled and motivated combatants.
The scene where Han and Leia are discussing various plans for freeing themselves and the Zeltrons from captivity definitely amused me, as while they're talking, the Zeltrons can be seen just getting on with freeing themselves, and by the time the heroes have come up with a plan they think will work, the Zeltrons have opened the door and begun their assault on the Nagai.

I was especially impressed by the separation of style used between the action on Kabray, and Lukes fight with Lumiya. Where the Kabray scenes are shown in normal squared off boxes, and have clean backgrounds of solid colours. Luke's fight is shown in jagged panels, with swirls of colour in the background, all without any dialogue. This really hammer home the tension of these scenes, of Luke finally facing off against Lumiya, who was once Shire Brie, someone he cared for very much, and someone who was once trained by his father Darth Vader.
Along with a general improvement in artwork, this use of the style to enhance the story telling totally blew me away.

Also I must comment on the use by the Zeltrons of a Medical droid as a dressmakers dummy when they're making Leia's dress particularly amused me, as the droid isn't particularly suited to wearing a magnificent bejewelled dress.

Low Points : There's not a lot which I can pick out in this issue. Knife somehow managing to remain concealed in the crowd when Leia and Han enter the diplomatic gathering I found somewhat annoying, he goes from being nowhere in sight, to having a gun at Hans head between frames.

So what do you really think ? : If this is the start of the Nagai war I've been told about for the nearly 20 years since I set up this site, then wow it's going to be amazing if they can keep this standard up. While the story isn't particularly amazing, the way that the pieces from recent issues are starting to come together into a grand tale is impressive. With the Slavery witnesses by both Leia and Han in separate stories merging into a united threat against the fledgling Alliance of Free Worlds, backed by Lumiya and the Nagai. Even the joke character of Dani, who seemingly was introduced to make Luke nervous, has become a serious one, and an exploration of her people, the Zeltrons, is key to this issue and fascinating.

Final Words : Wow, not only am I keen to see how the Nagai conflict will continue to build, but I can't wait for the next issue to see the resolution of the Luke, Lumiya fight. I'm really impressed.