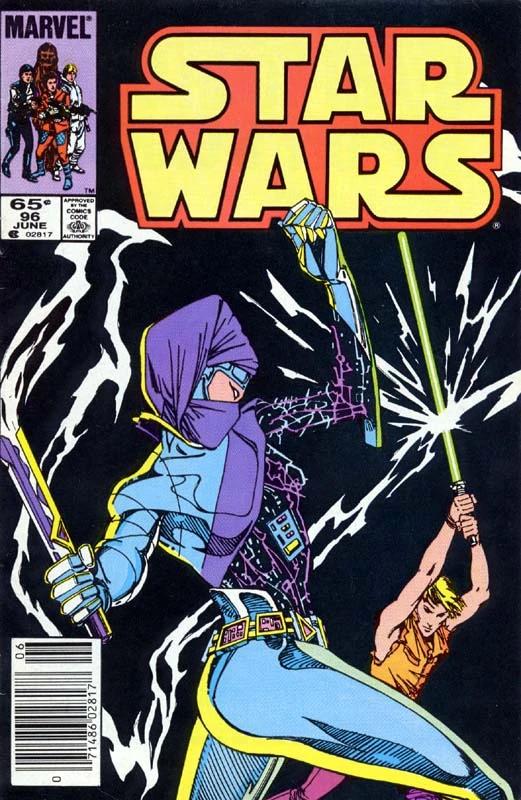 What is it ? : And we pick up the story of the fight between Lumiya and Luke, they face off on the surface of Kinooine, Lukes Lightsaber against Lumiyas Light Whip, but the single blade of the saber cannot defend Luke against all of the tails of Lumiya's whip, and we see him beaten and sprawled on the surface as shown in the final panel of the last issue.
Lumiya takes Luke back to her base, imprisoning him and having a discussion with Den Siva, a Nagai warrior who questions her on not killing Luke, when he has haunted her nightmares. He shows interest in Luke's lightsaber, then informs her of the defeat of Blade and the others at the hands of Zeltrons, becoming interested in the species and especially in Dani who has also been captured.
Meanwhile, in the body of water where Luke left him, Kiro awakens, and struggles his way to the ship as he has no water breathing apparatus. He hastily puts one together, he ambushes a Nagai guard and sneaks into Lumiya's base, finding Luke, and blowing open the door with his Stinger Blaster that he still has from his homeworld of Iskalon.
Luke gathers parts together, as he has a plan to defeat Lumiya, and hastily constructs something. They then track Lumiya down, and Luke grabs his original Lightsaber using the force, and ignites it, along with the new one he has constructed, wielding one in each hand.
This time the fight goes differently, as Luke is now prepared for her whip, and Lumiya is unused to fighting someone wielding two blades, and Luke entangles her whip around one of his sabers, throwing the two away. He slashes at the now unarmed Lumiya, smashing her armour, revealing the scarred face of Shira Brie inside.
As he explains that she still worships his father, and that Vader was redeemed and turned back to the Lightside just before his death, Kiro spots a disturbance above them, as a massive Nagai invasion fleet comes out of Hyperspace.

High Points : The organic styling of the fight between Luke and Lumita that I was so impressed with last issue remains, with the fights shown in a different style to the rest of the issue, mostly without dialogue or explanatory text, showing the movement and action in detail.

And I love that the issue goes back, after the dramatic reveal of a defeated Luke last issue, this one starts off by going back and showing how that happened, kind of the reverse of the old cliffhanger endings. Instead of showing a dramatic moment, and then retelling it so the hero escapes, this showed him defeated, and then showed us what happened.

Speaking of cliffhangers, I'm also loving the way these issues are hanging together to form an ongoing story, last issue we ended with Luke's defeat, and this issue we end with the dramatic reveal of the Nagai invasion fleet. Definitely drawing me in to wanting to read the next issue.

Low Points : Luke knows Lumiya was Shira Brie?
Now, we've been aware of Lumiya's origins almost as long as she has been in the comics, but I've lost track of where Luke found out? We saw Vader healing Shira up, but Luke didn't. Leia was oblivious to Lumiya's real identity on Herdessa. I suppose the redesign of Lumiya's armour between that encounter, and this one, now showing part of her face, may make it obvious to Luke who he is fighting. But we don't get a signal of that anywhere in the comic. I really would have expected a moment when Luke is "Wow, Shira I thought you were dead," or something along those lines.
While this might be done to keep the secret from the reader, and lead to a big surprise revelation which has been spoiled for me by reading the background information as I do these reviews, it just comes across to me as if the revelation is treated too casually, and as if Luke has known all along.

And why have they redesigned Lumiya's armour anyway? When she faced off against Leia on Herdessa, Lumiya wore a full set of armour, which resembled a feminine version of Vader, with the mask having a similar triangular shape to Vaders, although with more organic curves. But now, while there remain some elements to link her outfit to that one, like a chest control panel and patterning on the black portions of the suit which resemble that of Vaders. However, the helmet has changed from a mask and respirator, to a simple cloth construction which covers her lower face, and looks like a turban on top of her head. It's a definite downgrade, and by using the one that she'd used before could have led to a more shocking revelation as Luke released that it was someone he once loved that he's fighting.

On the point of armour, I did feel a little conned by Kiro having to scavenge up a new breathing suit, it looks as if he just found a spare helmet, which if that was what they meant to happen, should have just been the story. However, the way the story tells it, he's trying to patch something together so he can try to rescue Luke and Dani. So he should be wearing something like a spacesuit helmet filled with water, or his old helmet patched and repaired. But it just appears as if he had a perfectly fine spare lay around.

So what do you really think ? : I really enjoyed this issue, and although I've moaned a lot above, these are really only very nitpicky complaints, because the story is brilliant. Again with the minor complaints, in fact it's too short. Since the amazing action scenes take up so much of the issue, we don't get a lot of story to go along with it, and most of the information we receive is from a solid information dump between Lumiya and the Nagai Den Siva, as he questions her on her motivations, on Zeltrons, on Lightsabers, etc.
But even this trope in storytelling is done with panache and style, since Siva's questioning comes across somewhat as those of an outsider to the galaxy, increasing the mystery of his and the Nagai's origins. But also as barbs at Lumiya, as he probes her for weaknesses, making it clear their relationship isn't one of equals, and that her position is one of her being useful to the Nagai.

Final Words : An excellent issue, and I really can't wait for the next one, the Nagai storyline is really living up to being everything I've been told about over the years, what an absolute gem to discover.