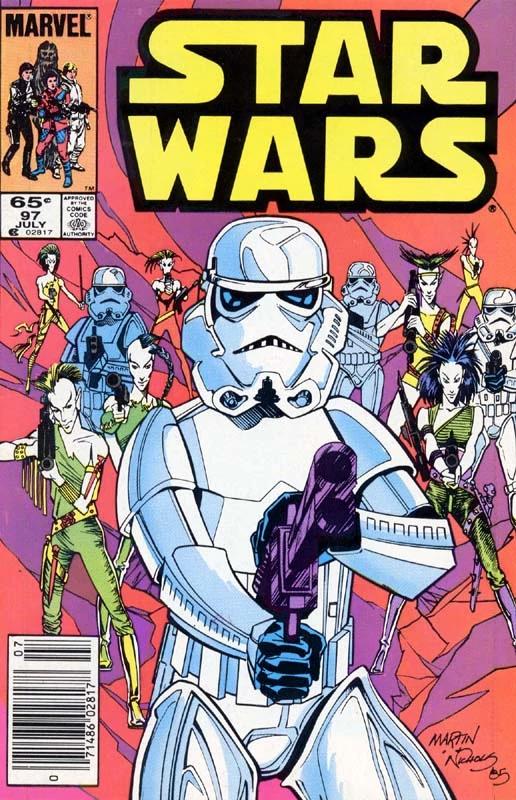 What is it ? : Imperial Stormtroopers and Nagai forces have arrived on Kinooine, and Luke, Kiro and their captive Lumiya are forced into hiding, with Luke pledging that they won't leave the planet until they've rescued Dani.
Dani however is being tortured by Den Siva, who has a seemingly broken Faron Tolis serving him. Siva is obviously infatuated with Dani, and although he claims that the torture is to learn everything possible about Zeltron physiology, it's clear he wants to break her into serving him. Faron finds this intolerable, and attacks Siva, but is easily killed by the Nagai.
Luke and Kiro recharge Kiros water tanks, and are ambushed by three Nagai soldiers, who Luke attempts to mind trick into becoming friendly, however Lumiya warns them, breaking the trance they were entering and Kiro dispatches all three.
Meanwhile Lando, Han and Leia are being briefed by Admiral Ackbar on the declaration of war by the Alliance of Free Systems on the Nagai, who have struck at many of their member worlds. With Luke missing, Han declares that he's going to search for him and ensure he is okay, but is rebuked by Mon Mothma and Ackbar, as soldiers don't just decide where they're going, they obey orders from their Leaders, and none of them are on the Ruling Council.
Han tells them to fight their war without him, and leaves.
Dani is recovering from her latest round of torture, bandaged on the floor when she is visited by Den Siva, who has brought her a flower. He tells her the Nagai consider things for their strength or workmanship, but never their beauty.
After he leaves, Kiro enters the prison cell, and begins carrying Dani out of the base, while Luke sabotages the computers so they cannot track the heroes, and attempts to steal any important information that he can.
As they leave the base, Kiro and Dani are attacked by Den Siva, who claims Dani is his now, and Kiro and Siva fight, Nagai blades against Iskalonian sword. Siva smashes Kiro's helmet, putting the water breather at a disadvantage, but Kiro pulls the two from a cliff diving into the river below.
Luke arrives to help Dani, and a lot of blood is seen in the river below, showing one of the combatants has been killed, and the reader can see Siva slipping out of the water in the background unseen to Luke or Dani. The two search and can find no sign of either combatant, but are forced to assume Kiro is dead because they find the flower of Siva's nearby to the river soaking wet, signifying he dropped it after escaping from the river.

High Points : Another brilliant issue, but firstly I must apologise because I missed mentioning in the last review, that Luke had come to the decision to train Kiro as a Jedi, and that while Luke was unsure what kind of teacher he would make, he was sure Kiro would be an excellent student.
I mention that, as much of the dialogue in this issue is coloured by that scene, as Kiro is doing his best to be Jedi like, regretting having to kill the Nagai after Lumiya warns them. And it makes his apparent death far stronger, as all conflict between Kiro and Luke had been set aside, and Kiro is exemplifying the ideals of the Jedi perhaps even more so than Luke.

The strange sadist torture of Dani is also remarkable in this issue, with Den Siva using his mistreatment of her almost as romantic. While the issue does remark that the Nagai prize strength, and Dani is resisting the torture with remarkable stoicism, the scene does come across as a strangely perverted version of him romancing her.

And finally, Go Han!, when Mon Mothma and Admiral Ackbar rebuke him for wanting to help his friend, he quite rightly storms out, telling them to fight the coming war without him. In my opinion, they're treating Han like a subordinate or employee, whereas in reality he is far more of a partner, helping out merely because he wanted to. General Rieekan understood that on Hoth, that Han could leave whenever he want to, but Ackbar and Mon Mothma seem to want to change the Alliance into a military organisation without discussing it with anyone else.
They definitely seem to have sold the Alliance as something it's not to the worlds they want to join, and from what I know of the heroes in these comics, and from other sources like the Rebels TV series, this will explode in their face as much of their forces simply leave, as they always saw themselves as freedom fighters, not just as soldiers.

Low Points : Although well done, I did find the apparent death of Kiro unsatisfying. And the fact that we don't see a body, so I keep having to use terms like "apparent death" is annoying, as it will rob this moment of any drama if Kiro turns up again later.
But the entire fight scene doesn't satisfy, as once they enter the water is basically cuts away, so we don't get any indication of whether the water is giving Kiro an advantage, or whether he's just outmatched by the Nagai, so Kiro just kind of dies unseen, which doesn't seem a worthy death for him.

So what do you really think ? : Again an excellent issue, and the continuing story of the Nagai invasion really is proving to be everything I've been told over the years.
And it's a real complement to the writers as to how the torture of Dani, and the death of Kiro have so much emotional impact. For two characters introduced just within the comics, these two have grown and although Luke is active throughout this issue, I would say that most of the action revolves around those two characters, and the story definitely doesn't suffer for it, and in fact benefits from their presence. As if Leia had been the one tortured, or it was Lando that was getting killed off, there would have been outrage, so the use of Dani and Kiro allow the writers to use storylines that otherwise would be blocked from them.

Final Words : Well, after a good run of related stories, now we're about to do what Marvel Star Wars tends to do every so often, and we'll get a bunch of unrelated stories which don't even match the continuity. Hmmm, well mark me down as unimpressed.