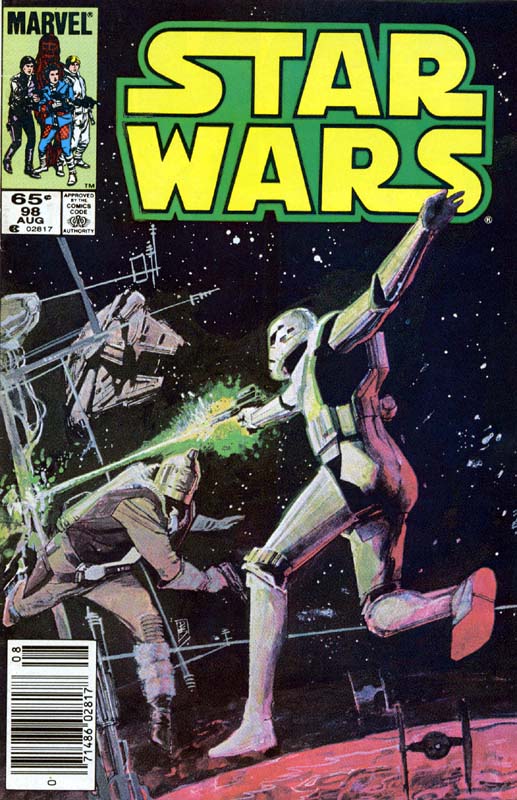 What is it ? : The Alliance have captured the shipyards of Fondor, which have supplied capital ships to the Empire and the Republic before it, however are lacking supplies. Lando is going to take the Falcon to arrange for supplies to resume, however Han isn't happy with him taking the ship since he damaged it during the attack on the Death Star, using Nien Numb as his co-pilot as Chewbacca is still on Kashyyyk.
He travels to an Imperial prison world, where he discovers the mission is to escort a woman and her child to Vandelheim, the world of the Metalsmiths which will provide the materials needed for Fondor.
The child is one of the "Venerated Ones", the families of those that founded Vandelheim, and without their blessing the Metalsmiths will refuse to sell to anyone.
The child complains about the Falcon just being a freighter, and not the armed troop transport or flagship that they usually travel by, but Han assures them it's carried Jedi Knights and Princesses, so will do for them.
As they arrive at the Vandelheim system, they are dragged out of hyperspace by a Hyperspace disrupter, which drops them in the middle of a mined asteroid field. Han realises that the shields are detonating the mines, so drops them and maneuvers skillfully through the field to safety, much to the joy of his passengers who finds all the action fun.
They arrive at Vandelheim, and meet with the planets leader, Guildmaster Orrk, who informs Han that since the occupation he has kept the planet working, and there is an entire fleet of drone barges loaded up with materials needed for Fondor, just awaiting the blessings of the Venerated Ones.
We then see Guildmaster Orrk speaking with an Imperial Admiral, Mordur, his plan was for the Venerated Ones to have died during the journey which could then have been blamed on the Alliance, and he could have then kept the planet working for the Empire. However, now he's forced to improvise, so he grabs the Venerated Ones, planning on killing them, so the workers will refuse to work, which will drive the price of the cargo already filling the Drone Barges up, allowing him to sell it to the highest bidder.
Han rescues them, and Guildmaster Orrk falls to his death after being shot by the child Venerated One, and they board the Falcon to escape the Imperial Forces on Vandelheim.
Once in orbit they detect the Drone Barges flying towards the sun, seemingly on a destruct course, but in fact it's a trap, since he expects that Han will board the lead Barge to attempt to change it's course, then he can capture Han and the Venerated Ones, which will stop the Alliance from attacking and allow him to take his captured cargo back to the Empire.
As expected, Han lands the Falcon on the lead Barge, but exits in a space suit, blasting out the bridge windows from outside, and leaving Admiral Mordur floating off into space. Han deactivates the engines of the fleet, but realises that he's left it too late and the ships don't have enough thrust to escape from the gravity of the star, and are doomed.
However, Lando arrives with the Alliance fleet, who tractor the Barges out of their predicament, rescuing Han and the Venerated Ones, who want Han to take them on more "Fun" Adventures.

High Points : Are we not getting into Prequel territory here, with supply lines and trade agreements and the like, and an annoying kid.

I must complement the artwork, which is outrageously good, especially the faces which are detailed and lifelike. I definitely think the artist must have been modelling all of the characters on photographs, and must comment on Admiral Mordur, who looks uncannily like a goateed Kylo Ren.

Okay, this is one I've reappraised while writing the review, as does happen sometimes.
On a first reading I couldn't see what was in it for the Empire to be helping Guildmaster Orrk drive the price of the cargo they've already got control of up. But on writing my comments, I've reread, and reread the issue, and have totally changed my opinion.
Admiral Mordur doesn't represent the Empire. He, along with his forces are remnants, who Guildmaster Orrk has been hiding aboard the Drone Fleet, out of sight since the Empire lost at Endor.
Mordur and his forces are operating independently to any other Imperial Remnants, although are still opposed to the Alliance, blaming them for their fall from power. So both Admiral Mordur and Guildmaster Orrk are just in it for the money, either keeping control of Vandelheim and profiting from them selling to the highest bidder, or shutting down sales of the materials from Vandelheim to drive up the prices of the fleet full they've already got, which would be enough to make both men immensely rich.
Although a little more complex than the plans usually seen in the Marvel comics series, it is actually quite brilliant, as I can't see any real holes in the plan. While the death of the Venerated One's isn't likely to cause Vandelheim to abandon their trade forever (after all the workers may be superstitious, but still have to earn to feed their families), it will cause a temporary disruption in the flow of materials, which will indeed force the price up, exactly when Orrk and Mordur are selling their ill gotten cargo.
With the rereading I've gone from being confused to as why the Empire is helping Orrk, to understanding the set up, and being impressed.

Low Points : If they've recaptured Lando's ship, the Cobra, from Knife, as mentioned last issue, why does Lando need to take the Falcon?

Star Wars naming has never been great, but were the writers reading Lord of the Rings the night before writing this? Honestly, Guildmaster Orrk, and Admiral Mordur, both sound like rip offs, and stereotypically evil.

So what do you really think ? : While definitely not one of the best of the Marvel series, I did kind of enjoy this one, and my rereading definitely led to me marking the issue up even higher, although the fact that it needed rereading perhaps shows that the story isn't as clearly told as it should be.

Final Words : My appraisal of this issue being enjoyable doesn't stop me being annoyed at them jumping away from the continuing storyline into these standalone stories. Especially considering that they offer no continuity at all with the main plots.
My first two complaints above, both stem from the fact that the writers of this issue had no idea where in the continuity it was supposed to be, we had Han dramatically quitting the Alliance last issue for not being allowed to decide what missions he could go on, then this issue he takes over a mission from Lando because he doesn't want to loan the Falcon to him, and is still working for the Alliance.

While I know the reasoning behind this, Marvel had teams of writers working parallel on comics, as writing and producing a monthly comic is a lot of work, so although while this has been published after the last issue, it may quite possibly have been written before, or at the same time as, those issues, and just been waiting for the main team to need some storylines to fill in while they complete the next section of their story. Which is why the art style changes alongside the plots.
But it doesn't change my annoyance with it, and the addition of a simple timeline would have helped. Even the addition in the first frame of the comic of "Shortly after the Battle of Endor", would have let us know that the story wasn't in sequence.