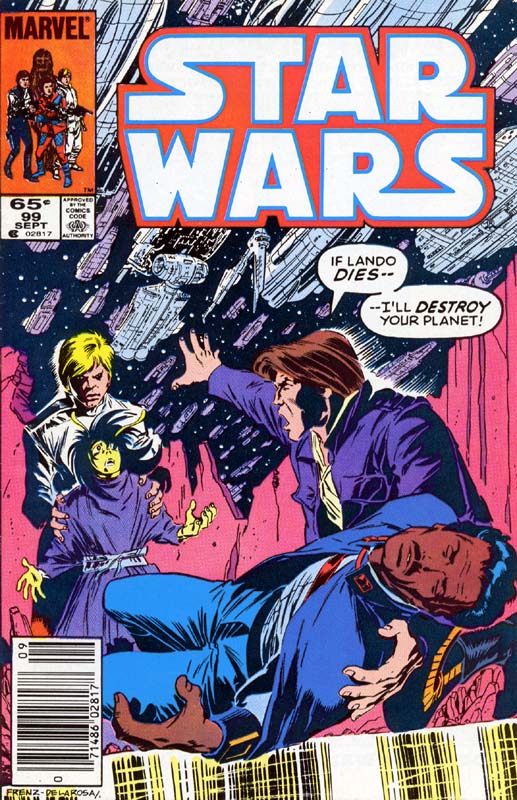 What is it ? : Luke is on Endor thinking of Kiro and the sacrifice he made, and wondering whether if he had begun training him, he might have been better prepared for the fight with the Nagai and would have managed to survive.
Meanwhile Han and his childhood friend Bey are on a mission with Admiral Ackbar to the planet Godo, where a virus is killing the entire population, the Alliance members have taken radiation baths to protect themselves, but this does not work on anyone already infected, as is the entire population of Godo.
The Entire Alliance fleet is in orbit, using it's combined medical facilities to try to aid the planet, but Ackbar comments that soon he'll need to send the fleet to aid the other worlds which are under threat by the Nagai.
It is revealed that Mandalore has fallen to the Nagai, but Fenn Shysa tells of how Bey helped them set up resistance cells, so the fighting is not truly over.
As they explore Godo, Han notices that the streets are lit by Flame Gems, which are worth 10's of thousands each, but notices that the indentations used for the gems throughout the city are empty in the central temple, as if it has been raided. He notices two particular indentations which he realises match the two statues that Lando once had, and R2-D2 scans the structure, detecting that it is a techno-organic construct used to deal with the virus.
That long ago the world had become uninhabitable due to the virus, but the Temple had been built to cure the population, and that without the two statues the virus had returned without any way of fighting it.
Returning to Endor, Han is told by Lando that he won the statues in a game of sabacc, and that one of them had been stolen by Lemo and Sanda, and the other he'd given to Barpotomous Drebble as a reward for being a "hero of the Alliance".
Han and Luke head to Lemo and Sanda who are in prison, and make a deal for their release and some flame gems in exchange for the statue, while Lando heads to Stenax to visit Drebble, who he find to be a truly reformed character, who gladly hands over the statue for a good cause.
They return to Godo, and place the statues back in their place, and almost instantly the population begins recovering from the virus, and to ensure that the statues are never removed again, the government orders the temple sealed, especially to non-natives of the world.
As the Alliance fleet prepares to leave, Lando collapses from the virus, having not taken a Radiation treatment to protect himself as he wasn't aware of the procedure. Han realises that the temple can easily heal Lando, but the Godo government refuse to make any exceptions and allow him to return to be healed.
Han tells them they have no choice, with the entire Alliance fleet still in orbit, they Godoans have no way of resisting it's combined firepower. Ackbar orders Han to stand down, telling him that he will not order the fleet to do such an action, but Han explains that he has a lot of influence, and Lando has a lot of friends in the fleet, who will be willing to do it for them, and numerous squadrons and ships begin reporting in their support for Han's plan.
The Godo agree to make an exception for Lando, and the heroes return to the temple, where Lando recovers, as Ackbar explains because as no physical action was actually taken, officially nothing happened.

High Points : It's great to see them picking up so many storylines from old issues and weaving them into a new story, we finally get to see the origin of the statues which Lando had. This also brings Lemo and Sanda back into the story, but far better than that, we get the return of Barpotomous Drebble, who is a totally changed man. It turns out that treating the man like a hero, hasn't swelled his ego and made him worse, but has actually given him standards to live up to, and he now behaves like a hero of the Alliance.

The plot, although a bit convoluted is a good one, how an ancient machine to save the lives of the population has become a temple which the people now worship, an interesting idea of how the loss of knowledge over time and the reverence people displayed towards the machine which keeps them alive twisted into a religion.

Low Points : Wow the first quarter of this issue is a massive information dump, as they walk through the streets of Godo, there are just panels and panels of speech bubbles as they are told the situation with the plague, Bey is introduced, the situation with the Mandalorians is updated, etc, etc.
And in fact there's way too much packed in, not only could we have done completely without Bey and the Mandalorians this issue, but also why did we really need only one of the Godoans to speak Galactic Basic and the explanation of that? And why is there a subplot where Luke and Han are followed by an Assassin from the prison when they collect the statue from Lemo and Sanda's gang. He just died instantly after firing, when Luke reflects his blaster bolt back at him. The over complexity at the start of the story definitely could have done with the removal of some of these extraneous details and plots.

Also once again the timeline seems seriously messed up, since when Luke and Kiro were fighting the Nagai for their lives, and Kiro died, Han resigned from the Alliance to ignore orders to go help rescue his friend. But here this is after Kiros death but Han is still part of the Alliance?
Although I do admit, the whole plot line from this issue with Han basically making the Alliance fleet rebel against Ackbars command to help Lando, if placed earlier in the timeline would have made Ackbar and Mon Mothma's treatment of the heroes recently make a lot more sense. Attempting to sideline them and remove them from the chain of command makes a lot more sense when they can totally overrule your Admirals just on a whim.
But here, the storyline is just justification after the decisions have been made.

Oh, and just as a side point, Han actually threatens to murder the entire planetary population of Godo if they don't help his friend. And much of the Alliance is willing to help him with this. And these are our good guys? I'm actually starting to support Ackbar and Mon Mothma's decision that these people shouldn't be allowed anywhere near the decision making process for the Alliance.

And finally, why does Lando get infected? He arrives on the planet and doesn't get the Radiation Bath's that have been allowing the Alliance personnel to operate on Gogo without becoming infected, but then the virus is cured. The machine is activated when is actually standing inside it, everyone else on the planet is cured almost instantly, so why wouldn't Lando. And in fact, why is the drama about allowing him access to the temple required at all. The machine is curing everyone else wherever they are on the planet, but Lando needs to go inside the machine temple to be cured? It makes no sense at all.
Oh, and Luke is never mentioned as getting the treatment either, arriving on Godo only at the end of the story exactly like Lando, but isn't infected . . .

So what do you really think ? : A reasonable story, but one which is made too complex unnecessarily, and numerous problems develop due to that complexity. If the writers really needed drama, then having Lando arrive before Han, and come down with the virus due to his lack of radiation treatment.
Have him breathing his last due to his heroic rush to save the planet's population, only to be saved by Hans arrival with the second statue. It doesn't introduce a totally pointless storyline where Han threatens to murder an entire planets population.

Final Words : I'm kind of stuck on whether we're back into the main ongoing plot of the series here, since we get movement in the Nagai War (Mandalore has fallen to them), and the introduction of Han's old friend Bey, who seems to be an absolutely massive Nagai (he looks like a Nagai, but is at least a foot or two taller than Han, possibly taller than Chewbacca). And we get Luke and Dani suffering from the loss of Kiro.

So there seem to be plenty of connections to the main plot line, and even some progression, but then again, Hans resignation from the Alliance seems totally forgotten about (although that may be the case from now on, as it didn't really have any effect even in the issue when it was done, since he resigns to rescue Luke, but then doesn't, and Luke doesn't need rescuing).
I guess we'll see as we go on.