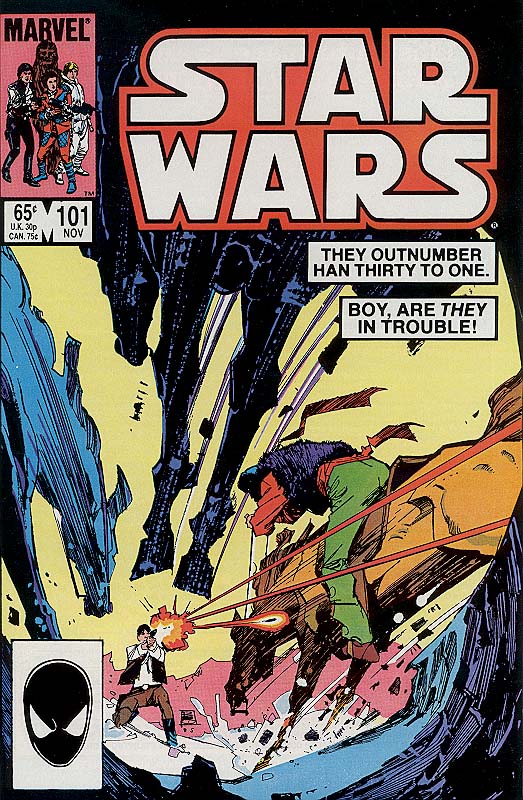 What is it ? : At some time before the last issue, Han and Leia are arguing, energy spheres have been appearing randomly throughout the sector and have been randomly jumping ships from place to place. Leia wants Han to take R2-D2, C-3PO and some Hoojibs to one of the spheres, so the telepathic creatures and the droids can study the effects and perhaps come up with a solution. Han remarks how he doesn't work for the Alliance, he worked for the Rebellion, and he doesn't want rodents aboard his ship, as he lays hands on her for emphasis, a Mandalorian Armoured figure knocks him to the ground, Han assumes it's Boba Fett, but it is revealed to be Fenn Shysa instead who leaves with Leia, leaving Han with Bey who has arrived with Fenn, allowing the two friends to catch up.
Launching on his mission and approaches a sphere, but the Falcon itself is caught in the effects of the sphere it's studying, and flashes out of existence.
On a snow covered world, Prince Gil and Princess Risa are being attacked by bandits, when the Millenium Falcon flashes into existence above them, crashing nearby. Han emerges and uses his superior blaster to chase the bandits off, letting the Prince and Princess shelter in the Falcon. They explain that they are to be married, that she is the daughter of the King of the light side of the planet, and he is the son of the king of the dark side of the planet, and that their marriage will unite the world, but the Bandits have been getting better armed and endanger the stability.
Soon Risa's father, King Cleroff arrives, along with his Vizier Marius, who has been studying the energy spheres which have existed on this world for years, Cleroff is grateful to Han for saving his daughter, and invites him to his castle. Vizier Marius offers to move the Falcon to the castle, in a way which doesn't even involve touching the controls, which turns out to be dragging it with teams of horses through the snow.
Han talks with the King, and watching the young couple together, he realises he's perhaps been treating Leia badly, when the Hoojibs approach him and inform him they have solved the riddle of the spheres, and that the Falcon will be ready to leave tomorrow.
Han heads to the roughest part of town, and meets with the head of the Bandits, coming to an agreement to hand over the Prince to them in exchange for a cut of the profits of his ransom, something he arranges.
He then returns to the King, telling the King that he has arranged, and that the King should accompany him so they can rescue Gil, and ambush the Bandits. However as King Cleroff, an angry Princess Risa and Han approach the site, the Bandits doublecross Han, saying that the ransom on the King, Princess and Prince will be far more, especially without giving Han a cut.
The leader of the Bandits is then revealed to be truly Vizier Marius, who intends to seize control of the planet with the monarchy out of the way, and to this end his studies of the spheres has led to him gathering weapons from other places, which is what he's been arming the bandits with.
However, it turns out that Han had figured all of this out, and sent the Hoojibs ahead to drain all of the energy from the Bandit weapons, so when the Royal Guard arrive, the Bandits are unarmed and easily captured.
The next day, after receiving thanks from the King, the Falcon departs the unnamed world, and the Hoojibs true to their word return it back to Endor where Leia is waiting for Han and the two embrace.

High Points : Wow, there's a really interesting idea in here, that spheres which provide instantaneous transportation across the galaxy and beyond have begun appearing.
Now, I don't know if these will ever be mentioned again, as it's not clear if the solution the Hoojibs come up with at the end just allows the Sphere's to be manipulated for instant travel, or whether they managed to get rid of them all as well. Although that said, the Hoojibs definitely have learnt how to use them to travel quickly between places. But they're a really awesome and galaxy changing idea, but we'll leave that discussion for the future when we find out whether the spheres still exist.
I'm also massively impressed at the Viziers plan, using his knowledge of the spheres, to get access to high tech weapons to arm the bandits to seize control of the planet. As schemes go in these comics, this is a solid one, as if he succeeds, he can continue bringing technology to the world, jumping it ahead thousands of years, which would probably make him a very popular leader.

Low Points : But the problem with this issue is, is how disposable the storyline is. The situation on the unnamed world is set up for Han to fix, the spheres are likely just a macguffin to put Han on this world for this one story, and Han just outsmarts everyone, figuring out that the Vizier is behind the Bandits, and where they're getting their advantage from, based merely on the Vizier telling Han that he's the smartest man on the planet.

I'm also pretty disgusted at the treatment the poor Millenium Falcon recieves in this issue as well, not only does it crash upside down on the unnamed world, but Han himself blasts open the hatch to exit it, saying that the ship will need fixed anyway. And then it gets dragged, still upside down, many miles by horses through snow and dirt.
The Falcon is only an inanimate object, and as mentioned, can be repaired, but it made me sad nevertheless.

So what do you really think ? : I wasn't impressed with this issue at all, not only is it out of sequence, meaning that the previous issue never mentioned any of the events in this one at all (so the sphere's weren't mentioned, so the Hoojibs probably disposed of them, it seems in all likelihood that it was the Viziers experiments to get access to advanced technology which caused them to appear anyway) except for Fenn Shysa and Bey's arrival, making it all very disposable and pointless.


Final Words : It's a bit of a mess, with Han laying hands on Leia at the start in a very uncharacteristic way, and then Leia just walking away from him distracted by Fenn Shysa leaving Han sprawled on the ground. We finally see Han acting as if he resigned from the Alliance, as he did, but then he goes on the mission anyway.
His incredible deduction of the entire Bandit plan doesn't seem deserved, as there's no way the reader could have made the same deduction as there's no evidence shown, and then we get a fairly unrewarding conclusion where the conflict between Han and Leia is just brushed aside, to in all likelihood never be mentioned again.