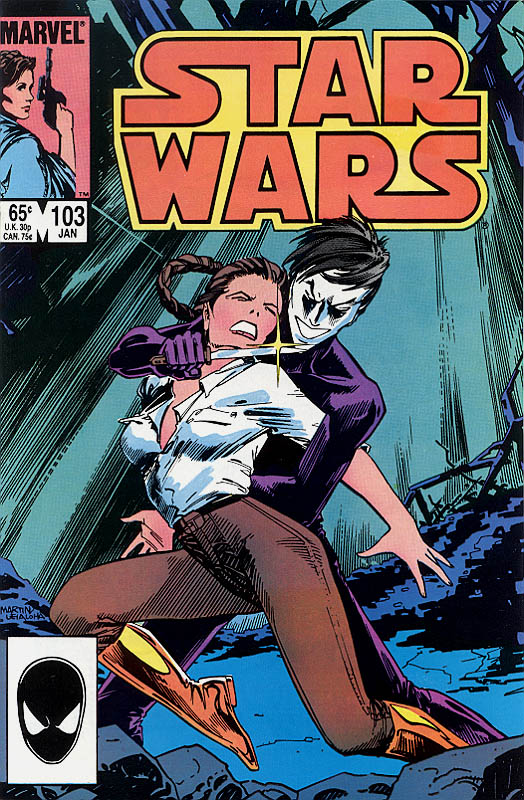 What is it ? : Den Siva is still obsessing over Dani, when he is summoned to see newly returned Commander Knife who is torturing a captured Alliance pilot, and they discuss a newly returned old enemy who is fighting their efforts in the Stensen system.
Leia is transporting her 4 Zeltron aides back to Zeltros, when their ship comes out of hyperspace above the world of Trenwyth, a world which was known to be abandoned, but they discover a large battle raging around. Their ship is damaged in the fighting and they are forced to land in the ruins of one of the war ravaged cities.
They discover the bodies of many dead Nagai, but find one still living who they capture and treat his wounds. It's obvious he doesn't speak their language, and although he attempts to escape, Leia treats him with kindness above the objections of the 4 Zeltrons.
He seems especially afraid of being tied up, and the comic shows him being captured and tortured by another species, who later Leia and the Zeltrons see moving among the bodies of the Nagai, ensuring they are all dead, and laughing while they perform such a grisly task.
Once the coast is clear, Leia sets the Nagai free, not wanting to continue causing him emotional distress, and they manage to exchange names, with the Nagai identifying himself as Tai.
Tai returns to the Nagai forces, where he is identified as a Wing Commander, and he explains the situation to Knife, explaining how Leia and the Zeltrons treated him with mercy and kindness even when he was their prisoner. Knife hurls a dagger into the chest of Tai, berating him as he dies for being weak and accepting the kindness of their enemies.

High Points : Although there's not a lot of story here, there's quite a bit of emotional content to get into, with Leia showing kindness and comforting an enemy in distress, even over the complaints of her Zeltron allies. We get some background information on a enemy of the Nagai which they've fought before and which has seemingly followed them into the galaxy.
After she shows kindness, the Zeltrons begin to follow her lead, and we see them telling stories to their Nagai prisoner even though there's no way that he'll understand them, but they share their adventures and life with him never-the-less, and this helps comfort him in his imprisonment.

Low Points : I usually try to work through the story roughly in order, but the ending of this issue to so ridiculous that I'll begin there. So, Tai returns to the Nagai and Knife kills him for accepting kindness from his enemies!
This is the same Knife who was captured by the Alliance and kept prisoner after his failed mission on Kabray, who was assumedly fed and had his wounds treated? So Tai's failure which he is killed for is not the failure of being captured, as Knife was captured, but for being treated nicely?
Knife doesn't come across as evil, he just comes across as petulant and stupid.

My other problem with this issue is with the humanising of the Nagai, I'm guessing that they're going to end up in an alliance with the Alliance against this new group of bad guys, who are shown to be evil because they apparently laugh while ensuring that enemy combatants are dead and harmless.
But I'm afraid it doesn't matter how bad the Nagai's old enemies are, it doesn't make the Nagai good guys, it just makes them "not-as-bad" guys. They're still the ones who are led by Knife who thinks it's fine to enslave the Wookiees, and to murder his men when they are treated nicely by the enemy, and Den Siva who has twisted romantic feelings for the woman he captured and tortured.
The Nagai aren't nice, in fact, so far the Nagai are still worse than their laughing enemies, as their enemies are probably 100% justified in ensuring that the Nagai who kill their own if captured, are actually dead, as they'll be motivated to go out taking as many of your people with them as possible.

So what do you really think ? : Not a terrible issue at all, but it seems that the writers are trying to turn the overall storyline here, to show that the Nagai are only bad because they've had to become so due to their old enemy, and they're not doing enough to redeem the Nagai, as their leaders continue to be evil rather than justified in their actions.

Final Words : With only 4 issues of the original run left to read, it seems a very late stage to be trying to redeem the bad guys they've spent so many comics proving were evil. But stranger things have happened, and one good storyline could just manage it, but we shall see!
But it's all getting a little busy, as we haven't even had the Hiromi explained yet, never mind a new enemy, but then again, we've not seen the Hiromi for several issues, so maybe they've just been forgotten about.