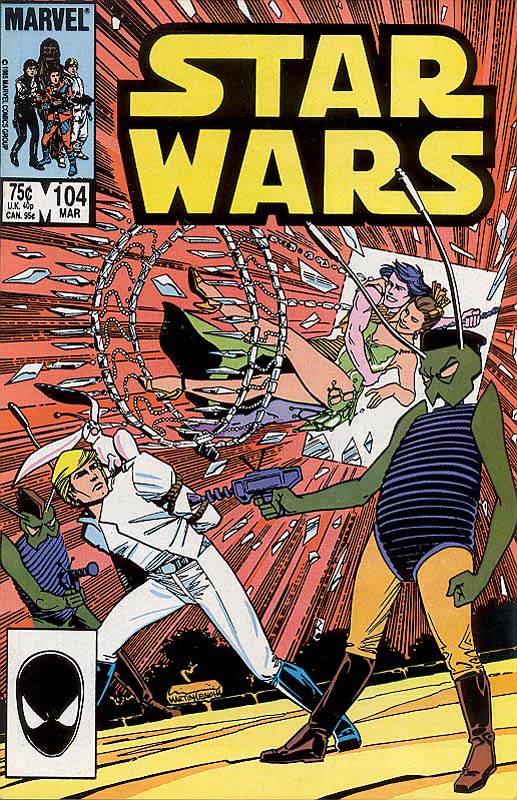 What is it ? : The heroes arrive on Zeltros, the homeworld of the Zeltron species, and Luke and Leia attract a lot of attention from the population, they have come here to try to gain Zeltron aid against the Nagai invasion.
They attend a massive glamourous ball where they will meet the King and Queen to try to convince them to join the Alliance of Free Worlds, however while Leia relays her meeting with Tai, and discovery that the Nagai are fighting another enemy, one perhaps far more fierce, so talks of a potential peace treaty with them. Dani wants the Nagai destroyed, due to their "murder" of Kiro, and the torture she was put through.
Leia and Dani step aside to heatedly discuss things, when Den Siva enters the room, slapping Dani while promising she will never escape him again, then another Nagai stuns Leia as she attempts to flee and raise the alarm that the Nagai are here.
Luke meanwhile is walking in the garden when he overhears someone discussing capturing the King and Queen, and investigating he discovers a Hiromi invasion force, who he allows to take him captive so he can discover more, communicating telepathically with Plif about the incompetence of the Hiromi.
The Nagai storm the ball along with the Maccabree warriors, and disarm everyone there including Han and Chewbacca, although Leia's four Zeltron aides, Bahb, Marruc, Rahuhl and Jahn manage to slip away and begin to plan how they are going to help when they encounter yet another faction invading Zeltros.
Meanwhile Luke and his "captors", are in the kitchens for the ball, as the Hiromi celebrate by helping themselves to the lavish food prepared for the ball, when the door is kicked in by another member of the third faction wielding a gun.

High Points : For a story involving the invasion of Zeltros by three different factions, which deals with the twisted capture and torture of a woman (Dani) by a sick individual who sees his treatment of her as some kind of love, this issue really keeps things quite light and comical.
It perhaps helps that much of the invasion focuses on the Hiromi, who basically declare victory and start celebrations after "capturing" Luke and raiding the kitchens. But the page where Dani is slapped by Den Siva, then a ballgown wearing Leia is savagely gunned down by another Nagai is pretty dark.

We get absolute confirmation, as a character comments on it, that Luke and Leia get extra attention from the Zeltrons, which again I can only presume is because they are force sensitive, but we get no confirmation of that, but it's really nice to see a building plot point and continuity dealt with.

Low Points : The Hiromi are kind of annoying, and I definitely find them extraneous to the main plot. Why do we really need yet another invading force, we've got the Nagai and their enemy, everything the Hiromi have done plot wise could easily have been passed to the Nagai, and I really feel that they don't suit the tone of Star Wars particularly well. While an incompetent military force might play out in something a little more comical, where you could make jokes about bureaucracy, it just seems that in the Star Wars universe, where the Sith and sadist Nagai exist, that the Hiromi just would have been crushed long ago.

Oh, and the name, I just hate the punny name.

So what do you really think ? : Not a high or low point, but something I must note, but this issue is one of the most colourful, yet with the least variety of colouring that I think I've seen in a comic in a while. The red skin of the Zeltrons dominates frames where they feature (and in a story set on their homeworld, they feature a lot), and the backgrounds aren't particularly detailed, mainly being expanses of Blue or white.
This means that each page has large areas of bright colour, shocking the eyes, but there's not much variety in there at all.

Final Words : For the storyline being a little light, I quite enjoyed this issue and being aware that we've only got 3 more issues to the main storyline to go, this feels like tension is building towards a conclusion.
I don't know how it would have felt at the time, as the end of the comic hadn't been announced at this point, with us finally seeing the Zeltron homeworld after them featuring quite heavily in the comic for 20 or so issues, and the various empires all coming together as they invade Zeltros, it's actually beginning to feel quite epic, even if we haven't really seen any real military might beyond a squad or two of soldiers. Looking forwards to seeing how they take this forwards.