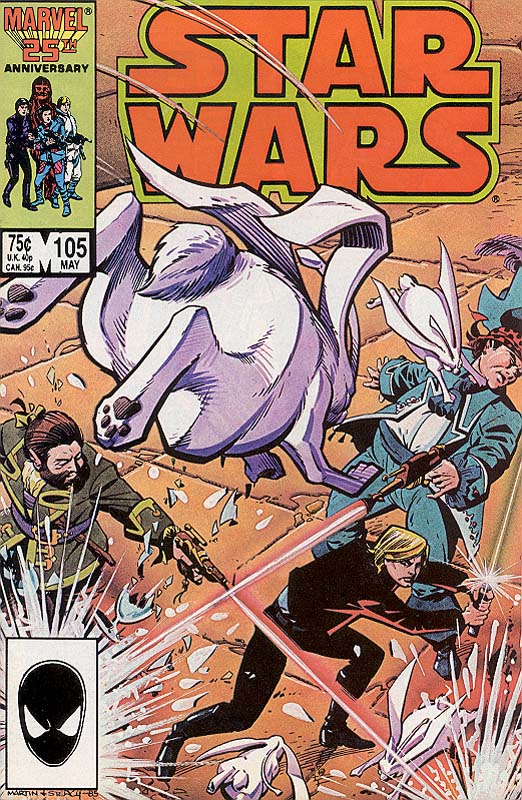 What is it ? : Rewinding time a little bit from last issue, Luke and Plif are "captives" of the Hiromi in the kitchens of the palace on Zeltros, as the Hiromi celebrate and enjoy helping themselves to the food available when the door is smashed in by aliens now revealed to be the Tof.
In the ballroom, the Nagai have taken all of the attendees at the ball captive, including Han and Lando, and communicate with Dev Siva who reports having taken Dani and Leia captive elsewhere, but it is then revealed he is playing along as he has also been taken captive by the Tof.
Leia four Zeltron aides are captured by these Tof as well, and are about to be executed when Leia bluffs that they are vital to the Alliance war effort, so the Tof instead take them away to their command carrier. Leia and Dani notice that Hoojibs are pretending to be just animals, to allow them to get close enough to the Tof to feed on their weapons power packs.
In the kitchen the Tof are examining the weapons they've captured, and are intrigued by Lukes Lightsabers, when Luke activates one killing the Tof holding it. The Tof are outraged by the seemingly random activation of the weapons they took from the Hiromi, who rapidly point out the weapon is actually Luke's. Luke grabs his other saber using the force, and when a Tof works out how to activate the saber they're carrying, the two clash, but Luke easily dispatches the Tof, liberating the kitchens, and fighting his way through to where Dani and Leia are being held.
He easily beats the Tof there, who soon realise that their weapons won't function and are reduced to battling with clubs, and the Hiromi celebrate a victory for their mighty empire.
Luke is glad they're happy, as he declares that they'll remain cheerful when they attack the Tof Command ship to liberate the Zeltrons taken there.

High Points : I mentioned in my last review that the artistic style had changed slightly, with larger areas of solid, but brighter colour, and that continues in this issue, but I must also mention the intro page. For the past couple of issues the intro page to each issue has been of a far more interesting design than previously done, with each issue given a large cinematic logo type title, something they've always tried to do, but recently it's just brighter and more successful.

The Hiromi are finally beginning to grow on me, they're not a danger, they're just a species who seem to have an over optimistic view of anything they do. So when Luke saves them, it's a victory for the Hiromi since they wisely kept him alive. And when he leads them to attack the Tof, they celebrate a victory because they've now got a powerful ally.
I can imagine them being conquered by a more powerful species, and celebrating their "alliance" with a great power. While I found them annoying before, this very alien attitude I find far more acceptable and interesting.

Low Points : There's not a huge amount of story in this issue, always a problem when there's action as it takes up so much of the issue, but it's especially bad this time, especially considering we lose some pages to a recap.

Luke's appearance, wearing a black jacket with a white undershirt I found a confusing design choice as visually it's almost exactly the same outfit that Han Solo has worn since A New Hope, which make's Luke's only defining feature his blonde hair, and in an issue swapping back and forth between groups of heroes acting, I did a couple of double takes, as Luke was in shadow and his hair drawn darker.

I'm not finding the Tof particularly villainous. We're being sold on them being terrible people, and by comparison the Nagai are good guys. But there's nothing the Tof are really doing that makes them bad, they've captured everyone through stealth, and managed all of this without shooting or hurting anyone. The only thing we see them do is shoot at the Hoojibs, but believe them to be mere vermin infesting the area they're in.
Whereas we see Den Siva lie to his own people to save his own life and happily betray his own people and lead them into an ambush to save the target of his affections Dani. This behaviour doesn't cast the Nagai in good light at all, as they come across as somewhat cowardly and without loyalty.

So what do you really think ? : Although absolutely necessary to the plot, I'd have preferred some actual world building here, the Tof are still very much an enigma, and we don't have any real information about them especially considering that they're supposed to be the big bad who's going to unite the Alliance, the Nagai and the Hiromi at the end of the comic series, and we've only got two more issues to do that in.
As I've pointed out a couple of times, we keep being told the Tof are evil, but we don't really get to see that, we haven't even just been told about their evil, we're just told that they're evil. So it seems to be a case of not showing, not telling, but implying, which I think smashes the writing rule of "show not tell".

Final Words : Well with only 2 issues to go, I'm beginning to worry that we're not really going to get any kind of real conclusion to the story. That it's going to rush through to where the Tof are beaten, and then just everything is fine, without any real effort into building any kind of real peace between the Nagai, Hiromi and Alliance. That just because they're forced into working together on this one occasion that all past transgressions are forgotten and everyone is bestest friends now.
Fingers crossed I'm wrong. But I am worried.