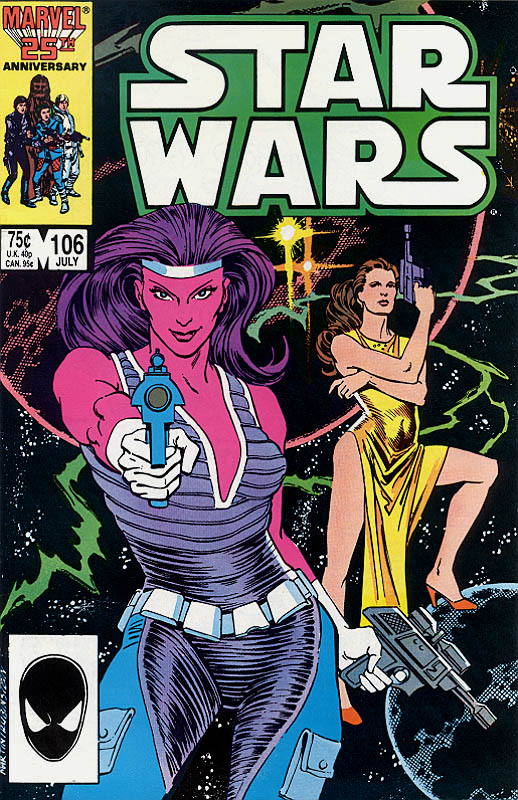 What is it ? : The Hiromi are celebrating their victory as "loyal members of the Alliance of Free Worlds", with their ally Luke Skywalker, when he tells them that he intends to locate and rescue Leia's 4 Zeltron aides from the Tof command ship. The Hiromi are less than keen on putting themselves in danger, however Luke stokes their egos and they fall into line.
Meanwhile Leia's Aides are in a prison cell, and comment on how often they've been captured since joining the Alliance of Free World, but come up with a plan to ambush their Tof guards when they're next brought food, however this doesn't work out well, with the guard beating all four of them in their weakened state.
Leia and Dani sneak through the Zeltron capital, spotting Den Siva with a group of Tof soldiers. They follow the group to where Han and Lando are being held, and watch as the Tof gun down the Nagai. Han thanks the Tof for what he thinks is a rescue, but is alarmed when they decide to kill everyone who isn't a Zeltron or Nagai. A fight breaks out, and Leia and Dani help ambush the Tof, freeing their friends, and Den Siva helps the heroes against both Nagai and Tof enemies, surrendering to them afterwards.
Luke attempts to interrogate a Tof prisoner for the codes to access the Tof command ship, but he scoffs at Luke's attempts, however the Hiromi turn out to be surprisingly efficient interrogators, remarking that after Eating, Cheering and Not getting beaten up, there's nothing that the Hiromi like to do more than get answers out of prisoners.
Luke, Plif and the Hiromi board the Hiromi ship and head off to the Tof command ship, and manage to board it, where they are attacked by Tof guards who recognise that although they had the right codes, they weren't a Tof vessel. The Tof ship is absolutely enormous, and although Luke easily defeats the guards, the heroes must split into groups to achieve their goals, with the Hiromi heading off to rescue the Zeltrons, and Luke, Plif and the Hoojibs heading off to sabotage the Tof vessel. The Hoojibs cut power to everything except life support, and the Hiromi reach the Zeltrons prison cell, where they are ambushed by the Zeltrons who think that they are hostile.
Luke arrives, and the Zeltron apologise to their new allies, however a surviving Tof attempts to kill Luke my shooting him from behind, when he is rescued by Hirog the Hiromi, causing celebration from the Hiromi that they killed a Tof all by themselves, which is joined by the Zeltrons, who also love a good celebration. Luke comments that perhaps the group isn't big enough to take on the entire massive Tof ship themselves, but he's planted explosives to destroy the vessel.

High Points : I'm really starting to like the Hiromi. When they were introduced I commented on how stupid they were, a cowardly race who I couldn't see as a danger to anyone. But the direction the writers have taken this, showing how they celebrate any victory, and consider almost anything a victory, has really grown on me.
I find their enthusiasm quite infectious, and they're not as incapable as they first appeared. Their particular love of "not being beaten up", is pretty sensible really, and their love of celebrating any victory, turns out to make them pretty compatible with the Zeltrons, who join in without any extra provocation.

The story moves along quite nicely, and with Den Siva ending up the prisoner of Leia and Dani we get the chance of a more satisfying resolution to the Siva/Dani storyline than just having her kill him.

Oh, and I must comment on the cover, it looks absolutely great, with Leia and Dani in a James Bond like pose, highlighting these two ladies who come to the rescue of Han, Chewbacca and Lando.

Low Points : I'm starting to get a little tired of how often the heroes rely on the Hoojibs energy eating powers, it seems that almost every issue there's a scene where the Hoojibs are ignored as they appear to be just small animals, they consume the power in the enemies weapons, allowing the heroes to triumph. It's becoming a bit of a standard Deus Ex Machina outcome.

I also remain unhappy with the "redemption" of the Nagai. Yes the Tof have invaded Zeltros, but that doesn't change the fact that the Nagai did it first. Just because their invasion got invaded doesn't make their invasion all right. The Nagai are still bad guys, and as I've commented before, in many ways they're far worse than the Tof have proven themselves.

So what do you really think ? : While this is a very strong issue, it kind of leaves the story in a bit of an odd place. While they've defeated the Tof invasion of Zeltros, so it feels like the end of the story, we've so many plot threads still hanging, and we don't get any sense that the heroes are moving on. There's no massive explosion as the Tof ship is destroyed, the heroes don't swoop off in the Millenium Falcon . . . It feels like the end, but doesn't feel finished, especially given the declaration that the next is the final issue.

Final Words : So, we're getting to the end, with one issue left to tie all the loose ends together and give our heroes one last adventure.

But it's not the end for my reviews of Marvel Star Wars, as it turns out there's still quite a lot to go for me. . . .