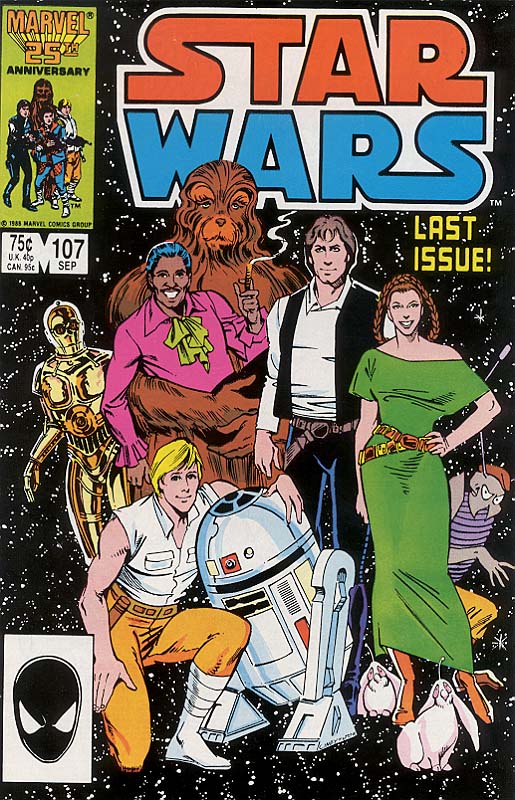 What is it ? : A shirtless Luke Skywalker prowls through the ruins of a wrecked city, when Knife can be seen sneaking up behind him holding two blades. Luke warns Knife to keep his head down as he wouldn't want anything to happen to his friend, and they discuss Lukes Jedi powers which allowed him to sense Knife's approach.
It is then revealed there is a large group of people with them, Den Siva, Dani, Han Solo, Princess Leia, C-3PO, R2-D2, Fenn Shysa, some Stormtroopers and others. They discuss how during the time which has passed since the last issue the Alliance, Empire, Mandalorians, Hiromi, Nagai and Zeltrons have all come together to fight against the Tof and their empire of slaves.
Dani and an also shirtless Den Siva are working together, he apparently has come to appreciate life and beauty through his torture of Dani, and she has come to hate and fear through the same process, and therefore neither fits in with their species any more, so have become close, although Dani remarks that she doesn't love or even like him, but she understands him.
We then get a flashback to the briefing by Admiral Ackbar, who has sent them here to Saijo, a fairly primitive planets, but one where there has been a vital spaceport for accessing the Outer Worlds. Because of this Saijo has been a site of many battles, between the Rebellion and the Empire, between the Alliance of Free Worlds and the Nagai, and now amongst their new alliance and the Tof.
It is also currently the site of the Tof commander, the Crown Prince who has been sent to join battle to prove his bravery and prowess in combat, something that has been revealed by the super top secret agent that the Alliance has placed within the Tof.
Lando is assigned a separate task, to provide space support by leading the Alliance fighter squadrons from aboard the Millennium Falcon.
Knife then insults Den Siva and Dani for being weak by picking up aspects of each other, but Han asks why he is bothered by half breeds as he was so accepting of his own half brother, and Han's old friend Bey. Knife says that Bey's betrayal has taught him not to trust aliens.
They prepare to ambush a Tof patrol, but Han and Knife continue to squabble before Fenn Shysa intervenes, reminding them that Bey was also his friend, and they should deal with the job at hand first, as Bey would.
As the group sneaks into the Tof command, the Tof Prince can be seen speaking to Lumiya, who discusses joining them after her Nagai allies let her down on her mission to destroy Luke and the Alliance.
Combat breaks out, with some of the heroes having smuggled themselves into the throne room as Slaves and in disguise. Meanwhile battle rages overhead, as Lando leads Alliance fighter squadrons against the Tof battlecruiser and it's fighters overhead.
Luke manages to get to the prince forcing his surrender at the tip of his lightsabers, but Lumiya has managed to get hold of Leias blaster and looks set to kill her, when she herself is shot and seemingly killed by a Tof, who is revealed to be the alliance spy, Bey, who has come to help both his families, Han and Knife.
Luke proclaims that this is the first chance in a long time that all their species have had of making peace, one he hopes that can actually achieve. . .

High Points : Well . . . Erm . . . it's quite well written, even if it jumps all over the place and it a bit of a confusing mess.
To tell the truth it's a enjoyable read, but the rush to fit everything in leads to it jumping all over the place, for example, Lumiya has abandoned the Nagai when they made peace with the Alliance. But she commanded the remnants of the Empire, and they've also joined with the Alliance, wouldn't it have made more sense for the Empire to be fighting alongside the Tof? It would have been quite a satisfying resolution to this series, to see the Empire reduced to allying itself to anyone and everyone to keep fighting it's ever more powerful enemy.

I must also comment on the Nagai, Alliance peace treaty (I really wanted to call it the Nagai / Alliance Alliance there, but that's kind of confusing), the Nagai haven't really proven themselves to be allies of the Alliance. However given the time constraints to fit everything into the final issue, I totally understand why they rushed this. However, I truly appreciated the fact that Han questions this as well, commenting on how the Nagai are still bad guys and he doesn't trust them.

Low Points : First of all. Why the heck does Luke spend the entire issue shirtless? I know a bunch of the Nagai do too, but can't someone loan him a shirt.

More seriously, I'm very confused as to how the heroes get smuggled into the Tof throne room. We see them sneaking around outside, and then we see a Tof bringing in some of the Nagai, including Den Siva, seemingly as slaves . . . how did that happen? Also Dani and Leia are concealed in the room wearing totally concealing Tof ball gowns as part of the princes contingent, when did they get those, and how did they get in?

The relationship between Dani and Den Siva is extremely troubling, they have apparently become close, all based on his lust for her, and the fact that he tortured her, and murdered the love of her life, severely damaging her psychologically. So now they're a thing. It's definitely a troubling message to send (to get the girl you want, murder her current love, and imprison and torture her a bit), and it tries to redeems Den Sivas character through just his relationship with Dani, when he's obviously an unrepentant sadistic murderer.

The big reveal at the end, that the alliance spy was Bey, was both obvious (signposted by Knife and Han discussing him for pages earlier in the issue) and of little interest (it would have been a bigger surprise if it had turned out to be Rik Duel instead, and would of at least added an interesting new dimension to his character). Although it did bring me a moment of amusement as he continues to wear his Tof fat suit as he monologues at the end.

So what do you really think ? : Although it's in a rush to get everything over with, they bring in extraneous elements to the story, why did they feel the need to bring back Lumiya, she barely has any effect on the story, and is covered in robes so is completely unidentifiable except for through dialogue.
And the rush leaves some storylines not really satisfying. The Dani / Den Siva relationship could have worked given more time, but it's just uncomfortable without giving Den some time to redeem himself a little.

Final Words : So that's the end of the Marvel comics, and it's been an interesting ride. Personally I still think the run of comics around the release of the Empire Strikes Back was the best, with Death Probe, Droid World, Dreams of Cody Sun-Childe, and Riders in the Void being particularly excellent.
The whole series doesn't actually have any problems fitting in with the larger Expanded Universe, and these stories can be made to fit even within Disney continuity fairly well. So definitely provide a resource for gaming material, which is exactly what I was hoping for.
Even though I'd stopped reading the Marvel comics before the Nagai war storyline started, I'd been told about it virtually since I started up RPGGamer back in 2002, so it's gratifying to have finally read it. And as I was told, it's a pretty good storyline, although one obviously quite heavily cut off at the end.

So, that's it for Marvel . . . well not, no actually. I've still got the three Marvel specials that I've skipped over, and the adaptation of Return of the Jedi, which was also published out of sequence.
But I've also got Issue 108 to do, which has been announced and now published since I began this series to mark the anniversary of the Marvel comics series.
And I've also discovered, that a number of the stories that I read some 40 years ago, but haven't seen during my review of this series is because I'm from the UK and I've been reading the US editions. Due to differences in publication frequency between the UK and US (the UK was Weekly, and the US was monthly), there were a number of extra stories which were only published in the UK. And since some of these are by respected Comic book authors such as Alan Moore, they're definitely worth going over, and I've managed to locate them having been republished in compilations called Wild Space 1 and Wild Space 2, so I'll be covering those as well before I'm finally finished with the Marvel Star Wars 1977 series.