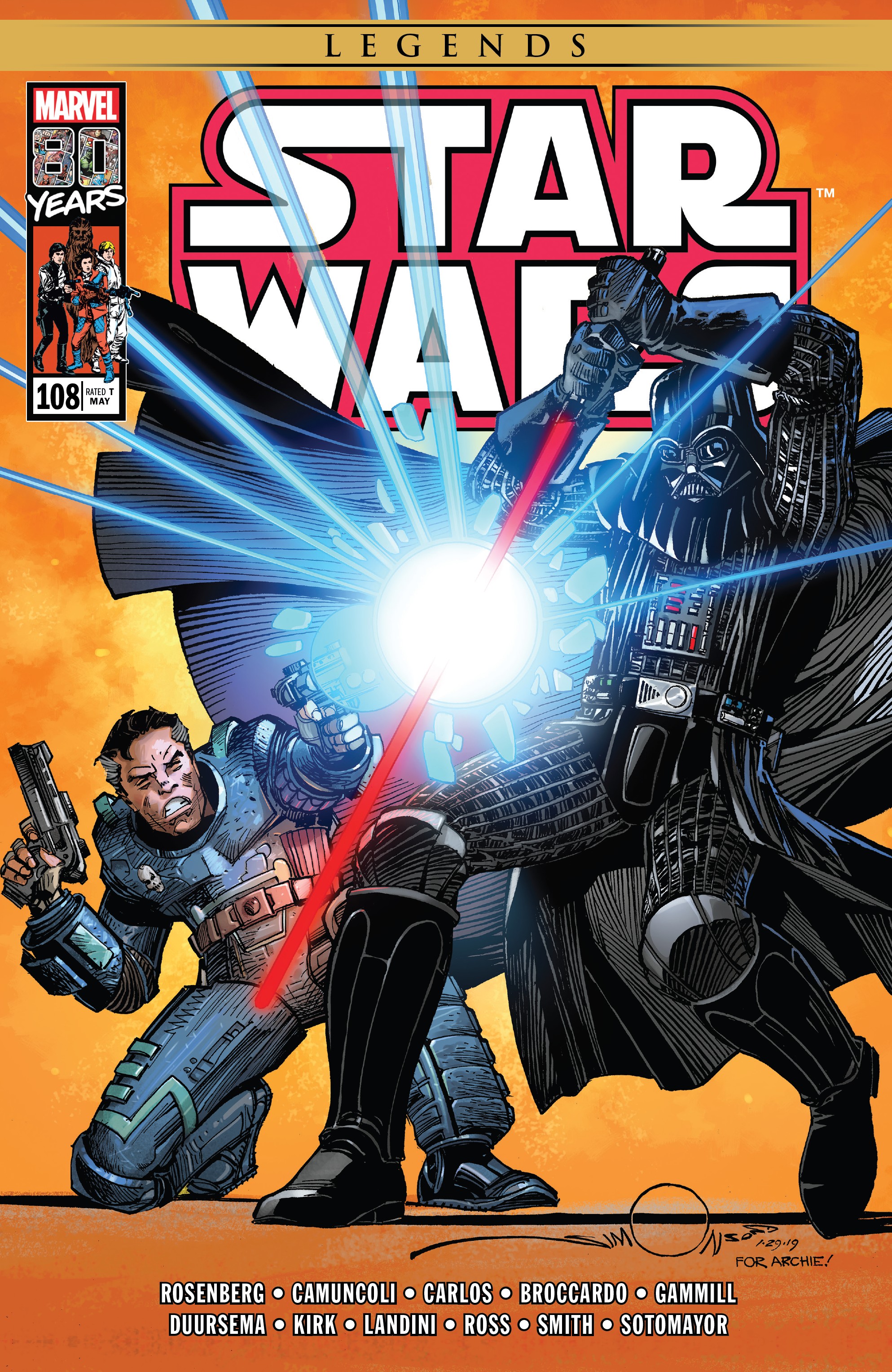 What is it ? : After the Marvel Star Wars series ended, the Star Wars licence for comics passed through other company hands, mainly Dark Horse Comics who produced some fantastic series which I'll no doubt cover in the future. But with the sale of Lucasfilm to Disney, who already owned Marvel, it wasn't long before the licence was returned to Marvel.
In 2019, to celebrate 40 years of publishing Star Wars comics (although surely it's 42 years), Marvel produced a special one off addition to the 1970's comic book series, numbered 108, and acting as a sequel to the 50'th issues The Crimson Forever.

Chapter 1: The Legend of Valance the Hunter

A group of salvagers on Centares talk of the legend of Valance, the Cyborg bounty hunter who had once been a Stormtrooper and hated droids, but came to respect them from Luke Skywalker, and sacrificed himself fighting Darth Vader to avoid Vader catching the boy.
It is then revealed that they have salvaged the cybernetic parts of Valance from the Lava of Rubyflame lake.

Han Solo and Chewbacca are in a cantina on Stenos attempting to get some smuggling work to pay their bills, only to be recognised as heroes of Endor, which has put a high price on their heads and they are attacked by numerous Bounty Hunters.
They flee through the streets only to be rescued by Jaxxon and Amaiza Foxtrain, who tell them that people are searching for Domina Tagge.

The crew of salvagers from Centares meet with the crew of a New Republic Warship, although comment they don't look like members of the New Republic. The crew of the Warship talk with an unseen female, and it is decided that the salvage must not be traceable, insinuating that the Salvagers are going to be eliminated.

Princess Leia is discussing the situation between the New Republic and it's Mandalorian and Nagai allies with her Zeltron aides, when they come under fire from a Tof assassin, which she skillfully deals with. Shortly afterwards, the Millenium Falcon flies in heavily damaged and going to crash, when it suddenly miraculously settles to the ground safely, only for it to be revealed that Luke has levitated it down.
Han, Chewbacca, Jaxxon and Amaiza exit the ship, and Jaxxon tells them of what they know about Domina Tagge, and Leia realises that a New Republic Warship monitoring the sector where Domina is reported to be has disappeared.

The crew of the Warship report back to Domina Tagge their success, but fighting breaks out as Valance's cybernetic skeleton awakens and he kills all the organics aboard. He befriends one of the droids however, who tells him that Domina Tagge has been researching the two jewels from the Crimson Nebula, and that as well as destroying life, they can restore it, which would allow Valance to if not return to being fully human, at least restore everything that was burnt away in the Lava.

Chapter 6: On the way to Forever

The heroes are searching for Domina Tagge, when the Millenium Falcon is pulled out of hyperspace by a star, around which they spot the remains of the Star Destroyer which was dispatched carrying the two crimson jewels into the unknown regions. They come under attack by Domina Tagges ship, and board the Star Destroyer in space suits to search for the jewels.

Chapter 7: Snatched Away from the Sun

After some searching of the wrecked vessel as they are pursued by Domina Tagge, Bossk, Dengar and IG-88, they locate the Jewels and Jaxxon manages to bound away with them, apologising to them, but saying the jewels look valuable.
Luke and Leia reach another docking bay, but witness the arrival of another ship.

Chapter 8: The End of the Hunt

The New Republic Warship arrives, destroying the ship Jaxxon is fleeing aboard, and Valance emerges, which sends Domina Tagge's bounty hunters running in fear. Jaxxon attacks Valance for destroying his ship, and Valance almost kills him, instead only taking the Jewels from him. He grasps the Jewels and flesh begins to form over his Cybernetics, but Domina Tagge blasts him with an Ion Rifle, and takes the Jewels, promising to spread the Crimson Forever once more to destroy everything that Skywalker values, the same way he destroyed her family.
She hurls one of the Jewels into space, declaring that they have been separated forever, and that the plague will spread destroying the New Republic.
The droid from the New Republic Warship that Valance befriended comes to his crippled body, and overloads it's power core, sacrificing itself to re-energise his systems. Valance takes the other Jewel from Tagge, and leaps into space, catching up and reuniting the two Jewels as he falls into the star below.
As Luke, Leia and Jaxxon watch, he drifts away, the Jewels healing his wounds even as he is lost in the glare of the star.

High Points : Well, it's an interesting idea, to come back to the alternate version of the Star Wars universe made by Marvel, and although they use lots from what is now canon, it's nice to see a Hiromi bounty hunter (although surely that's risking hurt a bit much for one of them?), and revisit Stenos and Centares (although we see so little of them they could really be anywhere, and we certainly don't see any Stenax on Stenos, which seems a missed opportunity).

There's a lot of story here, so it makes a fairly substantial read in comparison to the old comics, which can only be expected as it has twice the page count of the last few Marvel issues.

Low Points : Firstly while they've tried to bring back a lot of the original run of comics, a lot of it is only for show. As mentioned above, a Hiromi shows up as a bounty hunter, but is wearing his Hiromi uniform? And there's a Tof assassin, but no Nagai or Hoojibs to be seen anywhere. While Jaxxon plays a fairly relevant part in the plot, Amaiza only gets 3 lines of dialogue in the whole thing, but Leia's Zeltron aides don't get a single line of dialogue. And there's no mention of Dani, Blade, Bey, Plif, or any of the other characters who became quite important towards the end of the Marvel run, and why did they skip on the chance to have Lumiya and Domina Tagge team up?

I was also never a particularly big fan of Valance, so the story focusing on him so much did really excite me, but especially the way he's been made into some kind of Terminator. Instead of him just being a Cyborg with an artificial eye and a blaster built into his replacement arm, he's now in possession of a totally replaced body. The idea that the Empire would have paid for all that work for simply a wounded Stormtrooper I find unbelievable, and when undamaged he appears to be totally human, which is getting into the Human Replica Droid territory, which apparently costs vast amounts (I believe they stated Guri cost the same as a Battlecruiser).

So, the heroes set out to find Domina Tagge, and then get wrenched out of hyperspace by a star around which is the Star Destroyer they happen to be searching for. Wow, that's a Deus ex Machina right there.
Also, the Star Destroyer was sent out to lose the Jewels, either by staying in Hyperspace forever, or by being destroyed by making an unmanned Hyperspace trip. But just happened to come out of hyperspace in orbit around this easily located star. Seems like hyperspace perhaps isn't as dangerous as Han stated back in A New Hope.

Finally I wasn't a fan on what they did with Jaxxon towards the end of the issue, with him stealing the jewels to sell. He's never been shown to betray friends before, and the idea that he's willing to spread in interstellar plague for profit really doesn't portray him as the character I read about as a kid.

So what do you really think ? : Well, it's an interesting read, with a fairly good story. It's obviously not written by the same people, and the writers didn't perhaps read the old comics as well as they should have before starting the project. But it's a nice little love letter to the old Marvel comics, and while the story doesn't really add anything to the Crimson Forever story from issue 50 (the Jewels were sent off into Hyperspace to be destroyed or lost forever at the end of that issue, now they're found, but dropped into a star to be destroyed or lost in this issue), it's entertaining enough.

Final Words : I've actually really enjoyed the fact that during my way through the Marvel comics, this celebratory issue was announced and released, timing up quite well with my run through with it only having been released a couple of months ago.

But, I've apparently still quite a bit of classic Marvel to go, especially with the UK stories to do as well, so guess I'd better get back to them.