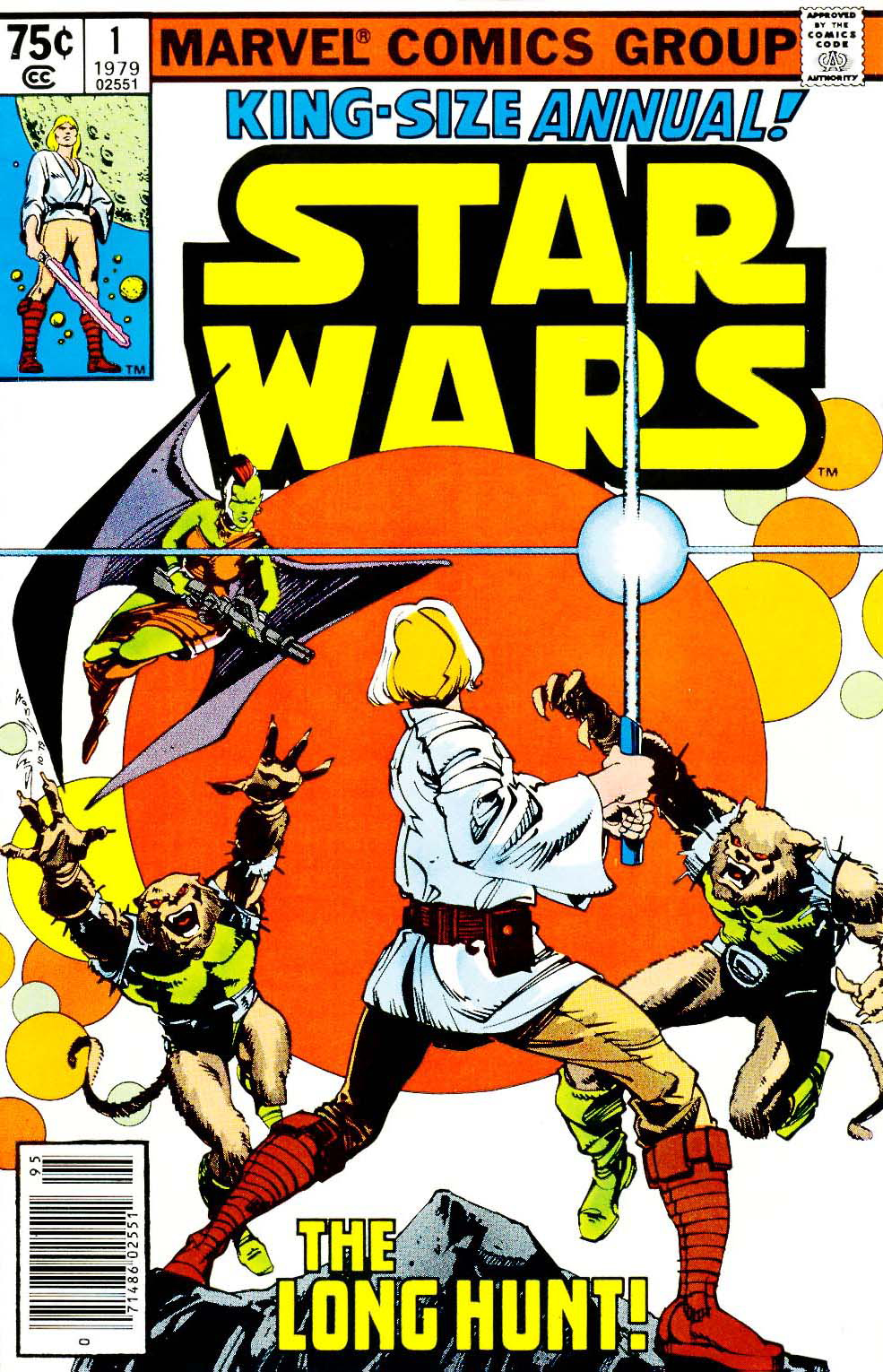 What is it ? : So we're jumping back to 1979, in a story which is apparently set between issue 30 + issue 31 of the series, although seems generically set just shortly after the battle of Yavin.

Part 1
The heroes, Luke, Leia, Han and Chewbacca have arrived at the world of Tirahnn and Leia is showing Luke the bizarre, his first encounter with civilisation off Tatooine. When are framed for picking the pocket of Kharys, the Majestrix of Skye, a large winged alien woman, who sets her bodyguards after them, Catumen who are powerful warriors which apparently even intimidate Wookiees.
After defending himself with his lightsaber, they flee back to the Millenium Falcon, which shortly afterwards is boarded by an ex-girlfriend of Han's, named Katya. As Luke recovers, Han and Katya hear the story of Kharys, and recognise her, so Han sets off to investigate by speaking to old contacts.
While he away, a smoke demon boards the ship and drains Katya away leaving only her clothes, before Luke fights it with his lightsaber, destroying it. When he returns, Han tells the story of his and Katya's encounter with Kharys.
A group of Corellian smugglers had landed on Kharys's world of Skye, where they ended up being hunted down by Kharys, and only Han and Katya survived, he has since looked over his shoulder expecting Kharys to hunt him down.
He takes the Millenium Falcon to Skye, where it is intercepted immediately by Tie Fighters, which damage the ship, and he puts Luke and Leia in an escape pod and launches them to the surface.
Luke and Leia awaken in a stone jail cell, and an alien of the same race as Kharys enters the cell, telling them they are summoned to a Life or Death trial.

Part 2: A Duel of Eagles
At the trial, Leia declares that all they want to do is peacefully leave, but the prosecutor shows a wanted poster for Leia. However their entire demeanor changes when they discover Lukes name. The heroes are also told that the Falcon survived it's encounter with the Tie Fighters, but was taken to Kharys's fortress, and when Luke and Leia discuss breaking into the fortress to rescue Han, the trial declares them friends of the Skytri, as this group opposes Kharys.
Meanwhile Kharys is torturing Han and reveals that she is bound to the Empire by an older obligation directly to Darth Vader, when Stormtroopers spot Skytri swooping in towards the fortress along with Luke and Leia wearing winged Anti-Grav suits.
They fight their way through the fortress, and Leia rescues Han, while Luke duels Kharys who is trained in the Jedi ways and wields a red bladed Lightsaber. After Luke defeats her, striking her dead with a blow from his Lightsaber.
The Skytri reveal that he has freed them from their obligation to Darth Vader, and tell Luke the story of how their planet was once saved by Obi-Wan Kenobi and two of his students, which the Skytri swore eternal friendship and fealty to. One of the students was Darth Vader, who returned years later and used their fealty to bind the Skytri to the Empire, but Luke's return wielding the lightsaber of the other student has freed them from this obligation.

High Points : There's a lot packed in here, and this annual takes quite a while to read as most of the panels are quite crowded with text, so you're getting a lot of story in this issue. And the premise behind the Skytri and Kharys is quite interesting, a species which was saved by Anakin Skywalker and Obi-Wan Kenobi and pledged themselves to their saviors, only to have Anakin return as Vader to enslave them due to their pledge.
It's an interesting concept, showing Vader taking advantage of his earlier good works and corrupting them.

I must complement the artwork at the beginning, while Luke and Leia are investigating the bizarre and then fleeing from it. It shows a world unlike any we've really seen in Star Wars, one which reminded me superficially of Mega City One in Judge Dredd, where numerous elevated plazas are suspended between towering buildings. The designs are really interesting and look like somewhere I'd love to visit and explore, and the artwork is realises brilliantly.

Low Points : Okay, the elephant in the room. This issue takes Obi-Wan's statement that Luke's father (still unnamed at this point) was killed by another student called Darth Vader as true, and recounts a story of Obi-Wan and two students visiting Skye, one student Vader, the other not named as Luke's father, but rather as the wielder of Luke's Lightsaber, which is his father's.
Now, this is apparently breaks lore, as Anakin and Vader are one in the same, but personally I'd love it if somewhere the story was retold, and Anakin lends his Lightsaber to another Jedi during their visit to Skye, leading to the confusion.

I'm also not a massive fan of Kharys being a Dark Jedi with her own Red Lightsaber, having apparently trained by Vader himself. She not only is at least as skilled as Luke (although that said, this is before he visits Dagobah, so is pretty unskilled at this point), she also has dark side sorcery abilities including that to summon smoke demons.

So what do you really think ? : An interesting story from the early days of the Expanded universe, but one which rushes to add too much to the Star Wars universe, with new Aliens, force powers, Dark Jedi, past adventures for Han, etc, etc. With all of this in the annual, none of it is particularly well fleshed out, with Katya showing up to meet Han purely coincidentally at the same time as they encounter Kharys and Katya is murdered by a Smoke Demon of her summoning.
But all of these ideas should perhaps come as no surprise, as this issue was written by Chris Claremont, who went onto much success as the writer of many famous X-Men series when he headed that title for 16 years, writing such stories as The Dark Phoenix Saga, Days of Future Past and many others.

Final Words : Remembering how old this story is, it's quite fun, but suffers the most from not really fitting in with the rest of the Expanded universe, as it just seems like Luke, Leia, Han and Chewbacca are just wandering around the Galaxy having adventures, rather than actually doing missions for the Rebellion, as well as numerous other problems with continuity.