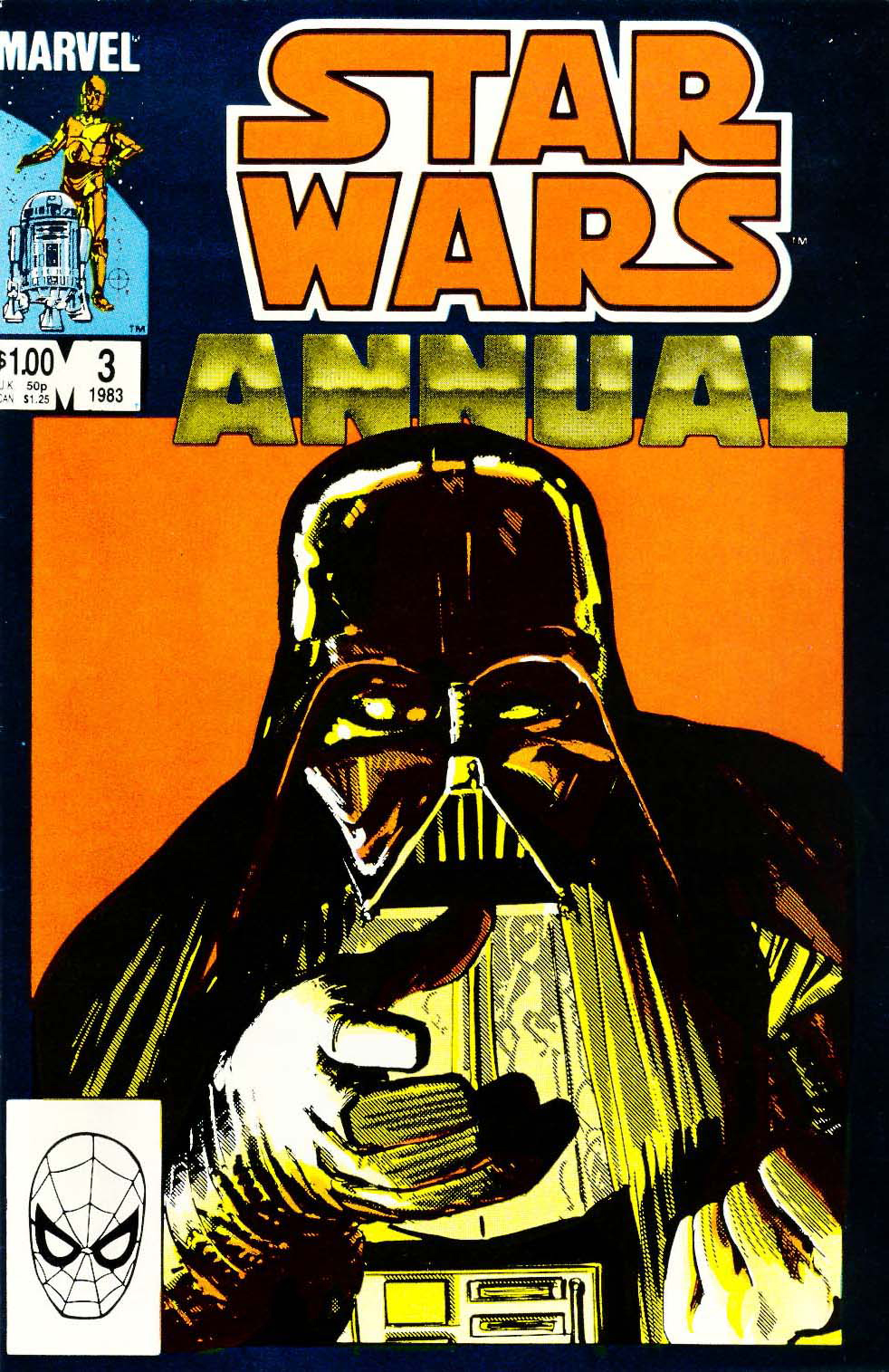 What is it ? : Another Annual from the period between Empire Strikes Back and Return of the Jedi, this time stated to be between issue 78: Hoth Stuff! and issue 79: The Big Con.
The story begins witnessed by a simple boot cleaner aboard a Star Destroyer, crouching on the floor at the feet of Darth Vader polishing his boots. Vader is meeting with some Imperial Admirals, and he tells them of the importance of the planet Belderone, and how this is the last chance of these Admirals to succeed, if they fail Vader, the Emperor and the Empire again they'll get no further chances.
Meanwhile on Belderone a young man, Flint, rushes to see his friend, Barney, to tell him an unknown ship has landed in town and wants to go see it. Barney is less excited than Flint, but the two head into town to see the ship against the warnings from Flint's mother that they'll be late for work at the factory.
In town they see the Millenium Falcon surrounded by towns people who have all come to see the strangers, and they witness, Lando Calrissian and Princess Leia talking with people in the crowd, but the two are more excited when the see the Lightsaber on Luke's belt, and ask him if he's a Jedi, but he denies it, claiming to have just received it from a friend of his fathers, a simple navigator on a spice freighter.
Luke, Lando and Leia go into a local cantina, attempting to locate the source of the weapons which are going to be used against a Rebel base on Kuthlis, another planet in the same system. However their identities are spotted and a spy reports them back to one of the Admirals, who rather than reporting their presence to Vader, attempts to gain personal glory by sending assassins after them.
The Assassins fail, with one of them committing suicide rather than be captured. Back on the Star Destroyer, Vader calls the Admirals into a meeting, reporting that he has received notification that the Assassins failed, and that the clumsy attempt to kill the heroes has alerted them that there is Imperial activity on Belderone, before he force chokes the Admiral who had ordered the attempt. He then orders that the imperial forces on Belderone should cleanse the planet before moving onto Kuthlis.
Flint and Barney approach Luke, recognising from the fight with the Assassins that Luke is indeed a Jedi, with Flint expressing the fact that his father was a Jedi, and he wants to be trained as one, but Leia sends Luke away in the Millenium Falcon to warn the forces on Kuthlis that they are likely to be attacked soon. The two boys offer to show Lando and Leia the Imperial factory they work at, taking them to a hidden elevator which leads to the subterranian factory, which as they approach, rumbles open to reveal some AT-AT walkers. Fortunately the forces on Kuthlis arrive and a squadron of X-Wings engage the walkers.
Flint and Barney realise that the walkers are heading for their town, and grab a speeder to warn the townspeople, and arrive just in time to see one of the walkers blasting the town, Barney is injured in a blast, and Flint witnesses his mother killed in another.
After the battle is over and the Rebels have destroyed the walkers, a hidden figure, which is likely Vader finds the grieving Flint with his mothers body, and senses a want for power to have protected his loved ones, and a feeling of loss that he remembers but has not felt in too long. Recruiting the boy, promising to train him, but only if he succeeds in proving himself to the Empire by working his way up.
Barney meanwhile is rescued by the heroes, and healed up, leaving with them to receive training from Luke.
We then see Vader watching Flint take one last look at a picture of his mother, then suit up as a Stormtrooper falling into step with all of the others, while we hear Barney telling Luke, that perhaps Flint didn't want to be a Jedi, perhaps he just wanted power.

High Points : The story of The Apprentice is fairly unremarkable, except where it managed many years before the prequel trilogy was made, to connect to those movies and Vaders backstory in quite a remarkable and touching way. Flint loses his mother, raging at having never been trained as a Jedi like his father and not being strong enough to save her, in a fairly similar fashion to Anakin losing his mother and wanting more power to save those he loves. But not only does Vader recognise the anger in the boy, but he remarks that he had "almost forgotten what it was to feel that way", which really matches up to Vader's backstory from the movies.

While not a whole lot happens in this story, it is an interesting turn on the usual, with us following two new characters, Flint and Barney, as they interact with the Rebellion and the Heroes. We see Luke, Leia and Lando act, and overhear their conversations, and while they're the protagonists of moving the story, we follow the two boys as they watch the story unfold, as they end up paying the price for the heroes actions with the destruction of their home town, and the deaths of many people they know.

Low Points : Oh that cover, that's bad artwork, and bad artwork that continues throughout, especially when the AT-AT walkers attack. In some frames the AT-AT's are so large that there's space for an X-Wing to land comfortably on their back (something which actually happens), in other frames the body is taller than the legs, leading to weird stumpy AT-AT's. Oh, and the artwork was obviously somewhat reused from the Battle of Hoth, as in one of the cockpit views we can see a Snowspeeder in the background where none are present at this battle, it just being between X-Wings and AT-AT walkers.

Because of the unique point of view of the story, much of the heroes tale is told through dialogue, so we get pages of them discussing their mission to Belderone, the Rebel base on Kuthlis, and the danger involved. It's a fairly classic spin on telling not showing, although one forced on the story by centering it on these two boys who are only really observers for much of the tale.

So what do you really think ? : For it's flaws, I really quite liked this issue, it does some interesting things, for example we spend a page slowly zooming into the town on Belderone from above, bringing into the story. But where it really triumphs is the pure coincidence which matches Flint's story with the one we see emerge in the Prequels for Anakin some 20 years later. This gives the issue an emotional power that wouldn't have been present at it's time of publishing.

Final Words : This story is the lead in to issue 92: The Dream, where we again see Barney and Flint, Barney training with Luke on Endor, and Flint having become a full fledged Sith Apprentice under Vader. And it is interesting to see the way they continued the story of these two characters, although perhaps it would have carried more punch of Barney had also been used in the stories between as well, rather than just disappearing and turning up when relevant.