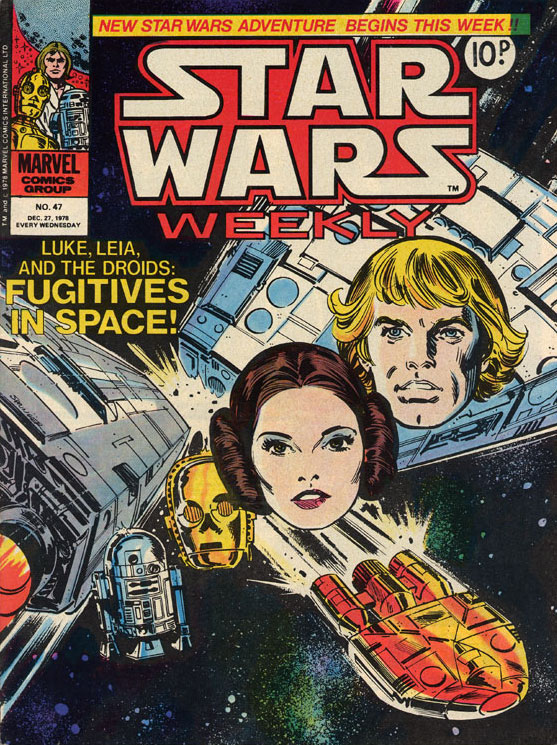 What is it ? : While Marvel was publishing a monthly comic in the United States, which we've already reviewed every issue of, in the United Kingdom they were releasing a weekly comic, which had far fewer pages as the American one, so the american stories were split over multiple issues.
However, with 4 issues a month, the UK comic managed to easily catch up with the US one, and run out of stories to tell. So they began publishing Star Wars stories from other Marvel publications, and writing some of their own. In fact as time went on, they began printing non-Star Wars stories, and it was here that I first read Guardians of the Galaxy, Star Lord, Deathlok, Killraven, War of the Worlds, and many other Marvel stories.
Now obviously I'm not going to cover those other stories, but I'll be dipping into all of the Star Wars stories they told, to cover all of the Marvel Star Wars stories. So we begin at issue 47, with the republishing of "The Keepers World" storyline from Pizzazz magazine.

Part 1:
Shortly after the Battle of Yavin and the destruction of the first Death Star, Luke, Leia, C-3PO and R2-D2 are preparing for a voyage to the Rebel base on Akuria. Luke comments on the two droids bickering, and that despite that they are best friends, and that they will be able to interact with other droids once they reach Akuria.
They launch from the base on Yavin, and make the jump to hyperspace using the recently repaired R2-D2 to navigate. But they comment on how rapidly the repairs to him were done, and that he doesn't "sound" right. The ship slows and emerges from Hyperspace in the middle of an Imperial War Fleet.

Part 2:
The Imperial ships recognise that they are a Rebel ship and attempt to lock tractor beams onto them to capture their vessel. As two Star Destroyers pull at them with tractor beams, Luke engages the "cosmic overdrive" and their ship slips out from between the two large vessels, leaving them pulling at each other. The tractor beams cause the two vessels to smash into each other, but their force shields cause them to bounce apart, shaking up the crews and creating a distraction which allows the Rebels to escape.
However the shock also has caused damage to their vessel and they begin crashing onto the planet below, which isn't on any of their charts, so they hope is empty of all life, however a feral beast watches their vessel burn its way across the sky.

Part 3:
They land safely on the planet, and set out to explore, planning on waiting until the Imperial fleet leaves to call for rescue, hoping that the Imperials think that they burned up in the atmosphere.
Exploring, R2-D2 and C-3PO discover a massive footprint in the ground of a beast many times larger than them.
Meanwhile in orbit, the Imperial forces begin searching the planet for the Rebels, with plans to return them to the Emperor, or if they resist, to destroy them.

High Points : We're back to the days just after the release of the original movie once again, and I find the writers attempts to be "Star Wars" to be amazingly quaint. Mentions of "Cosmic Overdrive", "Space Dragons" and "Hyper Space Navi Rods" make me cringe slightly, but the writers are trying so hard to make the story fit in.

The artwork is actually better than much of the early Marvel artwork, with great detail thrown in which makes it far nicer to look at.

Low Points : However, for my compliments to the art, some of the poses, especially Luke's, are really quite weird, with him standing in poses which look fairly odd, or in some cases hilarious.
There's also not really anything much happening in this story so far, with far too much time setting up "C-3PO and R2-D2 squabble, but are best of friends" for the rest of the story, which I think anyone who'd seen the movie would already know.

So what do you really think ? : These parts are really short, which is how they've managed to squeeze three of them into the weekly comic, which would normally only publish half of one of the Monthly American releases. Each part only having 3 pages, but even given that short space, not much happens, and I would have really thought that they'd have only required about half the space to tell this little story.

Final Words : It's not a disaster, and it's terribly dated and "quaint", but it's hardly a missing old gem of a story either at this point. We'll see how things go from here.