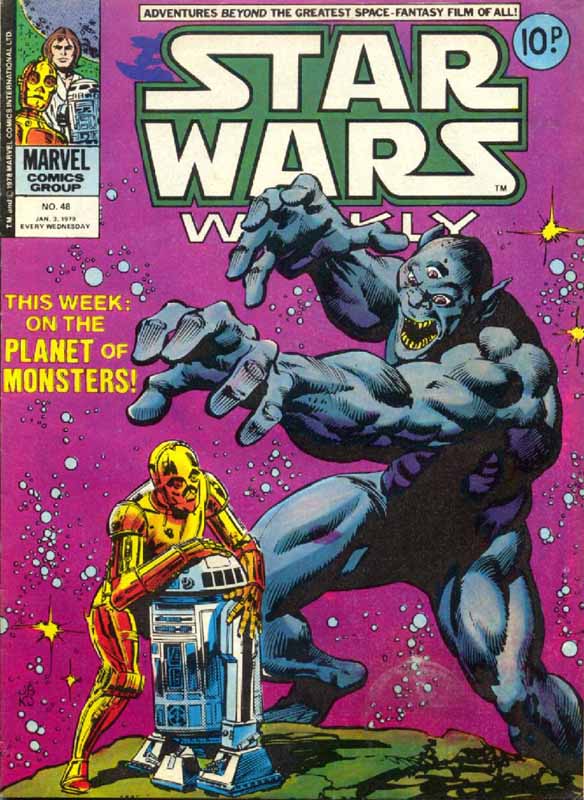 What is it ? : Part 4: A Matter of Monsters!
Luke, Leia and the Droids have set up a campsite next to their damaged ship, and although they originally thought the world to be lifeless the massive footprints they discovered have warned them that it is not. But they are still surprised as a massive pink furred creature attacks their camp.
As Luke, Leia and C-3PO struggle against the creature, R2-D2 moves away from their camp and discovers another much larger of the creatures sleeping nearby, and he awakens it. Because of its size the creature isn't interested in the humans as they are barely worth eating, but instead attacks and devours the first creature before leaving.
Part 5: Pursuit among the Ruins!
As they recover from the fight they spot an Imperial landing vehicle overhead and they flee towards some ruins to avoid being captured. However the Stormtroopers rapidly catch up with them and corner them within the ruins.
C-3PO stumbles against a wall activating a small switch, and the heroes are teleported away in the nick of time as the Imperials prepare to open fire.

High Points : It's a bit of the cliche having R2-D2 rescue everyone, as he does here by just wandering away from the fight with the creature, finding a convenient larger creature, and luckily it is only interested in killing their attacker, not in eating them. But it's still fun, although I do wonder how easily it could have gone wrong by just providing the heroes with a larger, more dangerous opponent.

Low Points : The story is only 6 pages long, and that doesn't provide much space for anything much to happen, and what does happen feels constrained by the length of the chapters. For example, in this issue there are two chapters previously published in Pizzaz magazine. The fight against the creature is contained within 3 pages, and feels rushed. But the chase into the ruins also takes 3 pages, which is more than it really requires, so suddenly the speed of the story drops.

So what do you really think ? : Not much to get my teeth into here, but I can definitely see how these extremely short issues would keep you hanging until the next, which was only a week away.

Final Words : This story feels like it was written for children a lot more than most of the Marvel stories, and it surprises me how much of each issue must have been given over to other non-Star Wars stories. For example, in this issue, after the 6 page Star Wars story, there was three other Marvel sci-fi stories, Tales of the galaxy: Visitation Part 1, The power of Warlock Part 4: Deathship!, and Tales of the Watcher: Pildorr, the plunderer from outer space!
So Star Wars was actually only taking up a quarter of Star Wars Weekly. . .