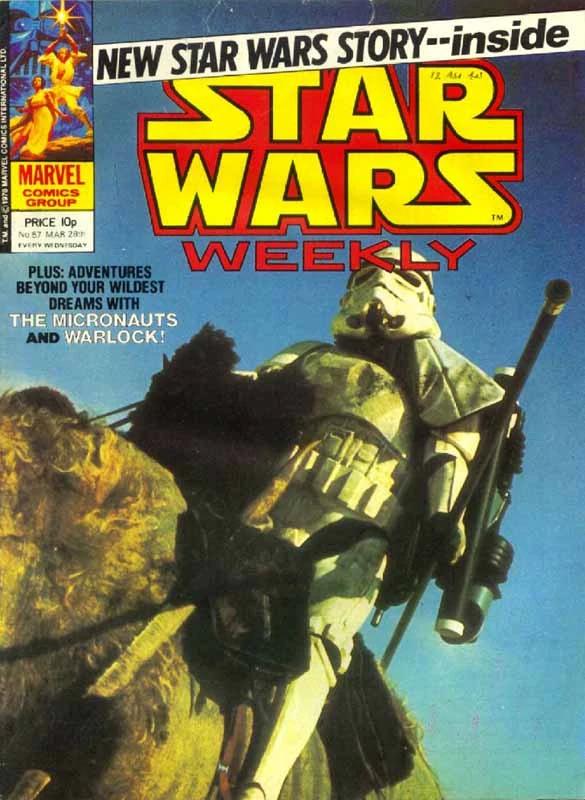 Luke, Leia and the Droids are arriving on Akuria Two after being delayed on the Keepers World (and by six other issues in between), and are flying above the world searching the surface for the Rebels they are supposed to be helping when they come under attack by two Imperial Tie Fighters.
Luke mans the controls, while Leia fires from the ships turret taking out an enemy fighter, however their ship takes damage and crashes to the planets surface, and as they sit there defenceless, a shot is fired from the horizon destroying the final Tie Fighter, and the heroes watch as a vehicle starts making its way towards them across the snowy terrain.

Luke examines the approaching vehicle through binoculars, recognising it as some kind of mobile fortress, while Artoo and Threepio investigate the crashed Tie Fighter, as Artoo is not detecting any pilot. However these activities are interrupted as their group is attacked by large furry beasts wielding clubs.
They are nearly overwhelmed, with only Luke and his Lightsaber holding them off, but are rescued as the Fortress arrives firing at the beasts.
Luke and Leia scramble aboard the vehicle, being greeted by Colonel Odan, who tells them he is the leader of Akuria Two's Rebel Forces.
And the Fortress speeds away, with the Colonel warning some of the beasts carry explosives, so the fortress may be crippled if they get too close, as Luke is concerned by Artoo Detoo and See-Threepio being captured by the beasts.

The Droids find themselves being carried towards a snow fort, while C-3PO blames R2 for separating them from Luke and Leia by investigating the lack of pilot aboard the Tie Fighter.
Meanwhile Luke and Leia are aboard the Mobile Fortress, which the Colonel explains is called the War Sled, Luke asks them to return for the Droids, but the Colonel tells him it will take some time to circle back and Luke becomes silent as the Colonel asks for details of the Alliances plans on Akuria Two before he commits his forces to help.
The Droids arrive at the fort, which they discover is heated by hot springs, and inside a bearded human berates the beasts for only bringing back the droids, and not returning with Luke and Leia. When C-3PO asks who the man is, he tells them he is Colonel Odan, commander of the Rebel forces on Akuria Two.
He tells them how his War Sled was attacked and captured by Imperial forces, and that he barely made away with his life. Artoo realises what has happened, with the Tie Fighters operating under remote control, so the Fake Odan could shoot them down and come to the rescue. The Real Colonel Odan agrees, and tells them they'll need to act quickly before Luke and Leia reveal any secrets to the Imperials, or end up as targets of an Imperial Execution.

High Points : Putting three parts together works a lot better than the two parts of the previous issues, and we get some solid storytelling here, even if it remains a bit rushed. The parts are better timed as well, with the first dealing with the battle with the Tie Fighters, the second as they defend themselves against the Snow Demons, and the third as the two groups deal with their "rescuers" and the Imperial plot is revealed to the Droids.
And it's a nice twist in the plot as well, with the fake Colonel just coming across as a little brusque, as if he has been inconvenienced by having to rescue these two offworlders who have been sent to help.

Low Points : The writers seem to have adapted to the shorter issue size (or the very short issue size of Pizzaz where these stories were first published) and it works a lot better here. However as mentioned above, it's still pretty rushed.
And I've got to mention the bad planning from the real Colonel Odan here, who sends snow beasts to rescue the heroes, which don't speak, and just attempt to grab the heroes, making them react to being attacked.
While the confusion is necessary for the plot, it's difficult to see how things might have gone differently, and they should just consider themselves lucky that Luke and Leia never actually managed to kill any of the beasts as they defended themselves.

So what do you really think ? : It's an enjoyable issue, and manages to pack in a lot of action and plot for just 9 pages of story, and I don't think there's much more to be said than that. The artwork is good, and the pacing is far better than the last story, I can see why I enjoyed these tales when I was a kid.

Final Words : Having read ahead to the next issue, I'm impressed that clues have been placed within this issue, with Luke spotting something and his silence in this issue being down to what he's spotted, rather than just a reaction to fake Colonel Odan agreeing to turn back to rescue the droids later. Very nicely done, I'm getting more and more impressed with this story.