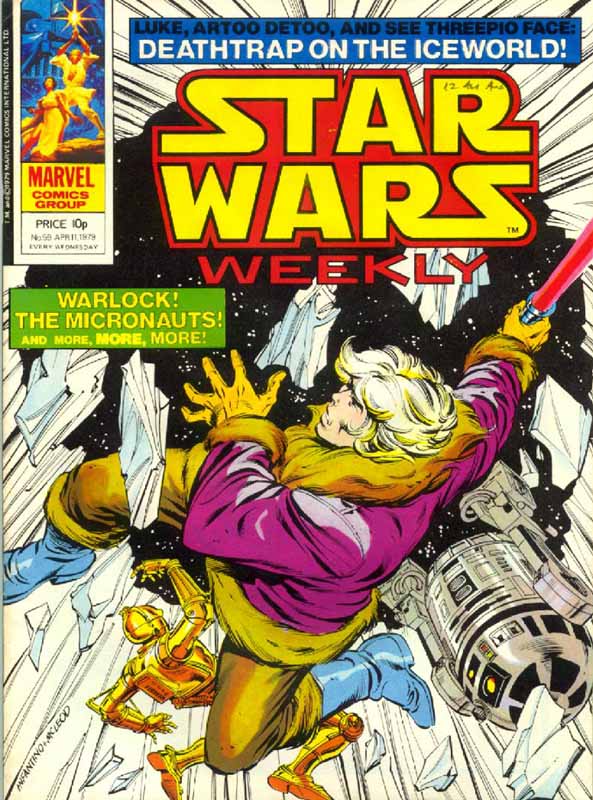 What is it ? :
Part 6: The Ice Worm Cometh!
Stuck on the ice after abandoning the War Sled, Luke, the Droids and the real Colonel Odan are facing being torn apart in an incoming ice storm. Luke orders R2 to use his Heat Induction unit to melt the ice beneath their feet, to create a trench which will shelter them from the storm, and he and Odan use their blasters to help.
However they are surprised when the ground collapses beneath their feet and they tumble down out of the storm into a tunnel. Odan reveals that this is a Ice Worm burrow, which the Rebels have used to travel and shelter in the past as the creatures which make them are nearly extinct.
Using their power ski's they begin making their way towards the Imperials camp, but unknown to them an Ice Worm awakens from it's rest and begins following them.

Part 7: Showdown
After travelling for a distance, R2-D2 informs them that he detects the heat of the Imperial Strato-Hopper above them, but also that he detects a massive life form approaching along the tunnel.
The Ice Worm crashes into the tunnel, and as Luke and Odan fire at it, the massive creature proves invulnerable to their blasters. However, the shots do sting enough to allow them to turn the creature to the surface where it erupts into the middle of the Imperial camp.
Fake Colonel Odan grabs Leia as the Worm smashes their Strato-Hopper, and takes their emergency Snow Flyer to take her to the Imperial base, as Luke, Odan and the droids emerge into the chaos of the Imperial camp, with fake Odans troopers battling the Worm and the icy storm.

High Points : Once again the writers are really making the smaller page count work for them, with each part presenting a little movement of the story, and one big action scene. So part 6 focuses on surviving the ice storm, then move the story forward as they close on Leia's position. And then part 7 has the action as they battle the worm and turn it into an advantage by forcing it into the Imperial camp, and then fake Odan flees. This short format really does pack a lot of story into very little page count.

Low Points : There's only one point which slightly bugs me about this issue, in that we are repeatedly told of the danger that anyone in the open faces against the ice storm. How the shards of ice will tear the flesh from their bones as they are bombarded with it's razor sharp pieces.
However, they emerge into the Imperial camp, which is completely open to the elements without any harm, and in fact Odan flees in his Snow Flyer, without any noticeable inconvenience, making me wonder why he hadn't just taken Leia to his base earlier.

So what do you really think ? : I'm very impressed by this story, when I started running through the UK comics I found the first story, The Keepers World, to be extremely childish in comparison to the US stories. However, Kingdom of Ice although remaining accessible, manages to not speak down to it's audience coming across far closer in tone to the movies.

Final Words : Something I haven't mentioned as I've been working my way through the stories of Star Wars Weekly is that I'm not using the original copies to read these stories, instead I'm using the "Star Wars Omnibus: Wild Space Volume 1" reprint of the stories. And because of this I've been enjoying the stories in full colour, but the original Star Wars Weekly comic wasn't in colour, so these stories I orignally saw back in the 1970's-1980's in black and white. But that stops after this issue, as from this point on the reprints are just in black and white as well, as these stories were never printed in colour.
Not important to the content of the stories of course, but something I felt worth mentioning.