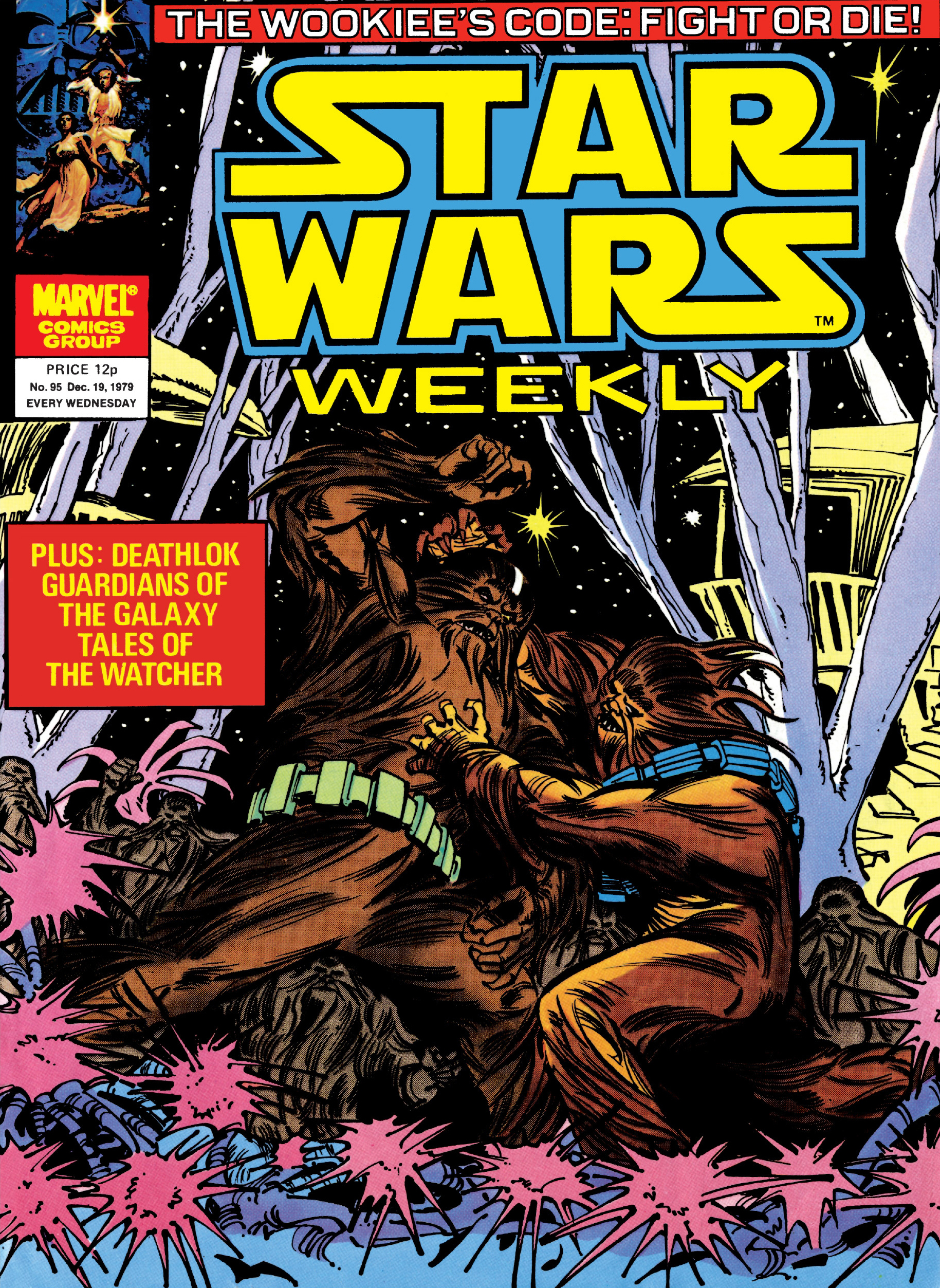 What is it ? :
Part 2: Chewbacca Fights Alone!
After a summary of what has happened so far, with N'Mrith warning Han and Chewie to keep a low profile, and Chewbacca charging the Stormtroopers who are keeping another Wookiee prisoner and Han shooting him from behind leaving him stunned. Han tells the Stormtroopers that his comrade was enraged by seeing the other Wookiee captive, but he's dealt with it, so they should just move along.
They consider taking Chewbacca captive as well, doubling the workers they're taking in, but Han convinces them that two angry Wookiees would just be trouble, so they move along.
As Chewbacca reawakens, Han asks him what was going on, and Chewbacca explains that he knows the captive Wookiee, Hronk. The two of them were rivals, and they were fighting one time,, with Hronk winning, when they came under attack from Imperial Stormtroopers forcing Wookiees to work on a deforestation project.
Chewbacca ended up leaving Kashyyyk to avoid the service, and Han suggests Hronk did the same, but has ended up on his way to the Spice Mines of Kessel, which is usually a one way trip. Han suggests that therefore Chewbacca has won, but Chewbacca remains unhappy leading Han to complain that he'll never understand the "Way of the Wookiee" until he's 200 years old.
The two receive communication from N'Mrith, that their cargo will arrive at midnight, but Chewbacca slips away, and can be seen sneaking aboard the Imperial Prison Ship through an open storage hatch. He manages to reach the detention hold unseen and ambushes the guards there, knocking them unconscious.
As the Prison ship erupts into chaos as Chewbacca releases the prisoners, Chewbacca escapes carrying an unconscious Hronk, but as it reaches 1 am, the Millenium Falcon is loaded with it's cargo, and N'Mrith frets that Chewbacca is missing, but they should depart because of the clamour at the Imperial dock. Han remarks that Chewbacca has never missed a take off yet. . .

High Points : There's not a whole load to like about his issue, with the only real point of interest being some back story about Chewbacca and his homeworld, something we'd not really had at that point in the Star Wars universe. But it's all too brief, and we don't really find out what the rivalry between Chewbacca and Hronk was about with it feeling very arbitrary rather than world building.

Low Points : I've mentioned before that each chapter in the comics, no matter how small contains an action scene, and that in the 3 page chapters of The Kingdom of Ice, and The Keepers World, it didn't leave much time for moving the story forward. This issue doesn't use it's extra 3 pages particularly well, with us receiving much explanatory dialogue, and the action itself not providing much challenge or risk for the heroes.
The entirety of Chewbacca sneaking aboard an Imperial Prison Ship, letting the prisoners out, and managing to sneak back off the ship, is all too easy. I know that these comics often make the Empire out to be buffoonish and easy to beat, but this occasion seems remarkable even for a kids comic.

So what do you really think ? : Definitely not one of the better Marvel issues, even if we do get a little glimpse of Kashyyyk and Chewbacca's history. But we've seen a similar Story told much better later on in the US run of comics, so this really just disappoints.

Final Words : Well, there's one part of the story remaining to allow it to redeem itself, hopefully we'll get some actually challenging action for the heroes, and some backstory for Chewbacca and Hronk's relationship, explaining why Hronk would need knocked unconscious to be rescued by Chewbacca from Imperial captivity.