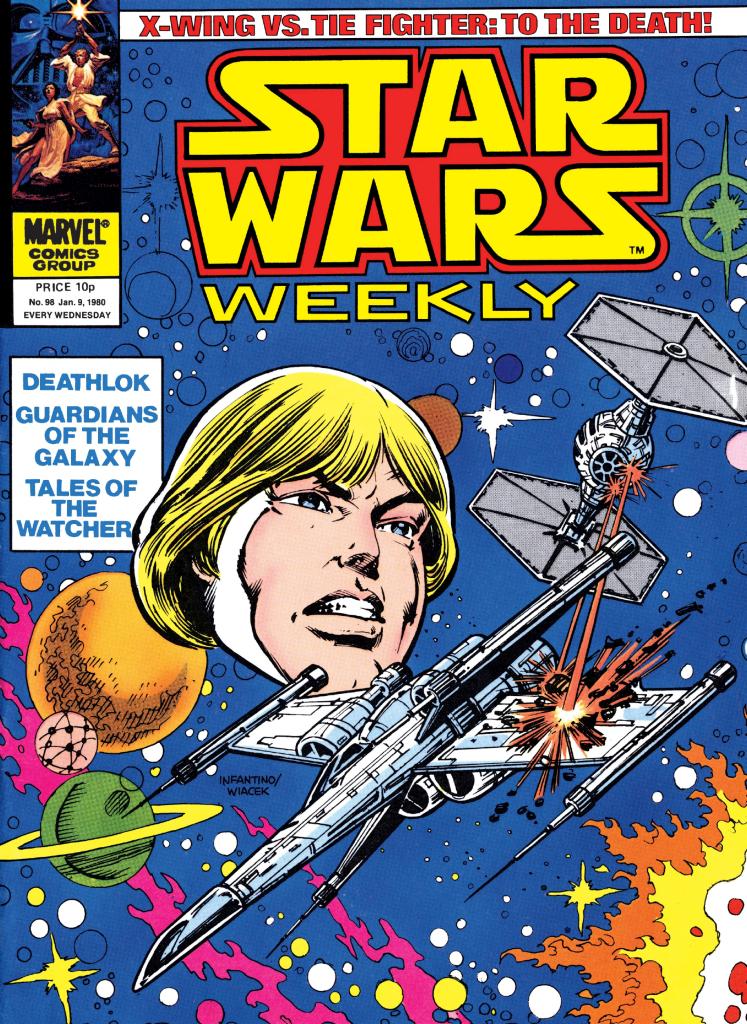 Star Wars Weekly 98: The Day After the Death Star Part 2

What is it ? : Part 2: X-Wing vs Tie Fighter: to the Death!
Following a brief recap of the story so far, Luke has taken his X-Wing on a flight to calm his nerves after the excitement of the Battle of Yavin.
He is orbit around Yavin IV, daydreaming about his next mission, thinking whether it'll be to lead an attack on a top of the line Imperial battlecruiser, to lead an attack on one of their main bases, or better yet to fight Darth Vader in a lightsaber duel.
But he is roused from his reverie by R2 warning him of an attack, and he reacts just in time as a Tie Fighter swoops in firing it's weapons. His skills are enough to avoid the attack, and he realises that the Tie is one left over from the Imperial attack, and as R2 tells him of damage to the Tie, he wonders if it had to sit out the battle to make repairs on one of the moons of Yavin.
As the two maneuver in space, Luke manages to get the Tie in his sights and pulls the triggers, only to realise he's taken his X-Wing before repairs and refueling were complete, and his weapons are deactivated.
Reacting quickly, he instead collides with the Tie Fighter, causing both vessels to tumble into the gravitational pull of Yavin IV, and as they rocket towards the planet, R2 magnetises himself to the X-Wing and exits the cockpit to make repairs, allowing Luke some control of the ship as it crashes into the forest of Yavin and the fighter is torn apart.

High Points : Well, not only does this story set up an interesting idea, that the destruction of the Death Star didn't destroy all Imperial forces in the area, but also gives us an interesting fight, with Luke piloting his already damaged X-Wing, which isn't battle ready at all.
It provides some excellent tension and action, as he cannot just open fire and destroy his opponent. Caught unprepared and daydreaming, he must struggle to survive, and he provides an interesting solution to the problem, but colliding with the other ship, hoping that his sturdier vessel will survive, which it certainly wouldn't if the Tie Fighter pilot managed to hit it with his weapons.

Low Points : There's no real downside to this story at all, except the low page count means it's so short we don't really get anything happening except the short skirmish. My only possible criticism would be that the Tie Fighter pilot remains totally faceless and nameless throughout. I would have liked to have seen him and gotten inside his head a little, there's definitely room to humanise him here, as he's stuck in the Yavin system with scant hope of rescue, and no way to make his way home, so engages in a final glorious battle to at least give his death some kind of meaning.

So what do you really think ? : For all of it's briefness, this is an engaging and fairly exciting skirmish between Luke and a Tie Fighter, and it's somehow made somewhat more tense by the fact that's it's happening so personally between these two opponents. The Tie Fighter pilot is far from home, believed dead, so has no back up. And Luke himself has taken his fighter unofficially without informing anyone, so is also without any support or backup.
These two are fighting for their lives in a battle in a universe totally uncaring and unknowing of the danger that they're in. There's no Millenium Falcon or Wedge to swoop in and rescue Luke, there's no Imperial fleet to support the Tie Fighter. It's just the two pilots and their ships against one another to the death, and I'm very impressed by the way the writers frame this and make it such a personal battle all the time with the Tie Pilot remaining the faceless face of the Empire (if that makes any sense).

Final Words : So the two have crashed on Yavin IV, so their conflict will return but on a face to face basis. While I'd like to see the Tie Pilot given some personality, and to humanise him a bit, I do appreciate the fact that they've so far kept him faceless and just one more soldier willing to give his life for the Empire.