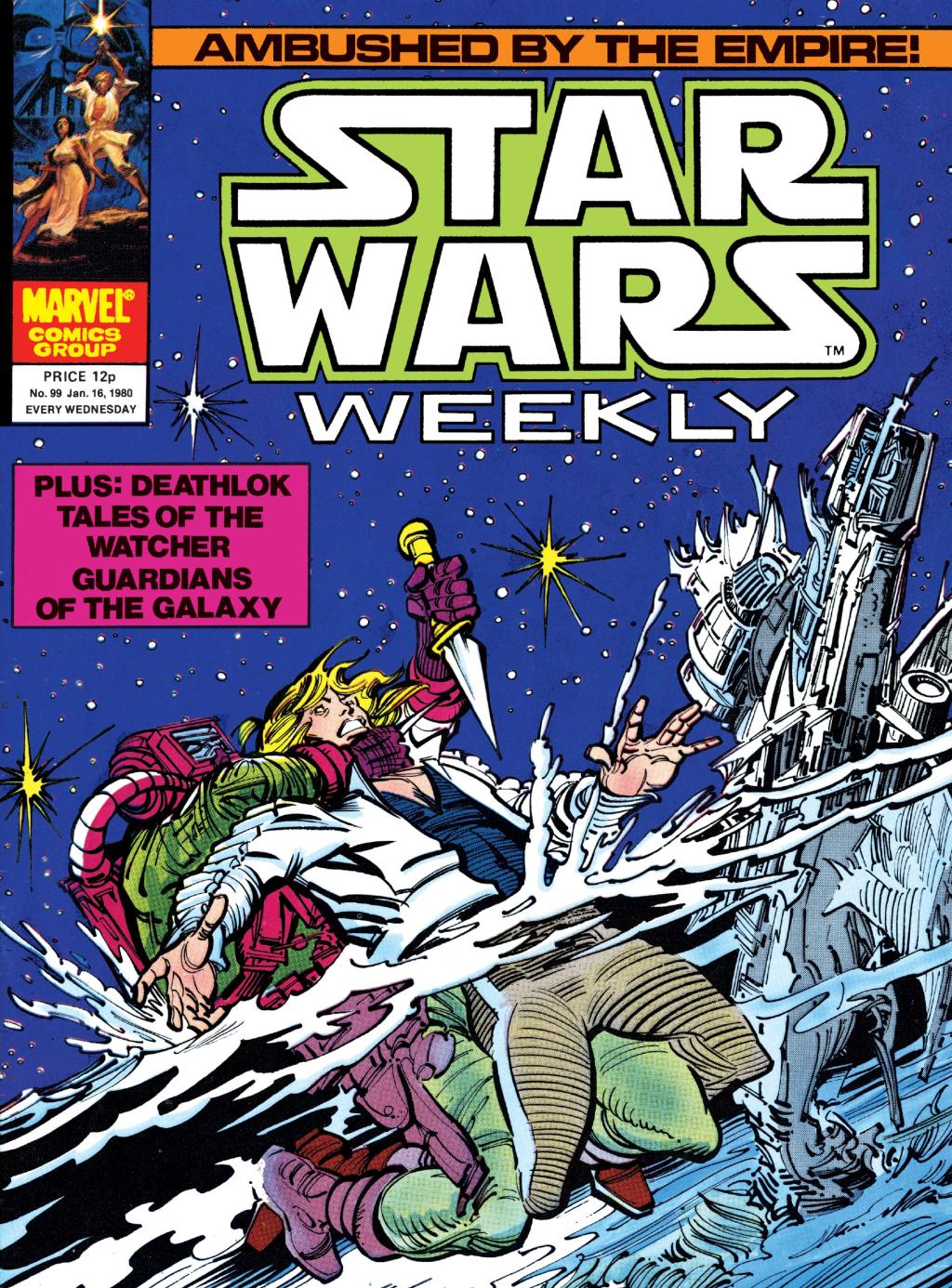 Star Wars Weekly 99: The Day After the Death Star Part 3

What is it ? :
Part 3: Empire Kills!
Luke has crashed onto the surface of Yavin 4 after colliding his X-Wing into the Tie Fighter he was attacked by in orbit the night after the destruction of the Death Star. His fighter is torn apart as it impacts with the forest, and he realises that R2-D2 is missing, as he was outside the fighter making repairs as if crashed. He also finds that his helmet commlink has been damaged in the crash, so he has no way of contacting the Rebel base which is nearby to call for help.
He removes his flight suit and a shot comes out of the forest, as the Tie Fighter pilot spots the orange suit and fires through the trees. Having not expected any action, Luke has left the Rebel base without his utility belt and without any weapons.
Hiding above, as the Imperial pilot approaches to check the body he thinks is laying on the ground, which is actually just Lukes discarded orange flight suit, Luke leaps down and a struggle begins.
The armour of the Imperial Pilot gives him an advantage, and Luke tries to get ahold of his opponents blaster, leading to the two of them tumbling into a lake. As they continue to struggle, Luke realises that his opponent is still wearing his breathing equipment, allowing him to breath underwater. But Luke turns this against him, by tearing out one of the air hoses to his helmet, allowing water to rush into the helmet causing the Tie Pilot to begin to drown, and he passes out.
Luke drags the Tie Pilot out of the lake, and removes his helmet, grabbing a branch to cave the pilots skull in.
But he looks at the pilots face, seeing a boy fairly similar in age to himself, and he stops himself, realising that the Imperial isn't just machinery or armour, and that if he kills this boy he's no better than the Empire. And as he wonders what to do next, Han, Leia and C-3PO with R2-D2 in a landspeeder, telling him they heard the sounds of fighting, and Luke comments that while he'll never forget the day he destroyed the Death Star, he'll not forget the day after it as well.

High Points : There's some nice ideas in here, lie Luke luring the Tie Pilot in with his bright orange flight suit, and his tearing out of the air hoses on the Tie Pilots suit to cause him to become entombed underwater in his own armour.


Low Points : But everything just kind of happens too quickly, and the pacing seems off. We get two pages of set up before Luke is attacked, but the entirety of Luke luring in the Tie Pilot occurs within a page, and the fight underwater in a single page as well. I'd definitely prefered a little more time to be spent on these scenes.

So what do you really think ? : While I mentioned last issue that I'd have liked them to personalise the Tie Pilot a little more, revealing his internal thoughts to allow us to see him as a person. I take that back, because I'm extremely satisfied with the way the writers let this play out. Only letting us see the Tie Pilot as a person at the same time as Luke does, making his realisation of his opponent as a real person far more powerful as we haven't come to that realisation first.

Final Words : While not the best Marvel Star Wars story I've read, this is a solid little tale adding to the world and giving us a nice little tale of an encounter Luke had with a surviving Tie Fighter the day after the destruction of the Death Star. And there's definitely nothing in here with contradicts canon, and does help satisfy a question I always had, that if the Millenium Falcon and the Rebel Fighters could survive the explosion of the Death Star, didn't any Imperial fighters or the Death Stars supporting fleet survive as well?