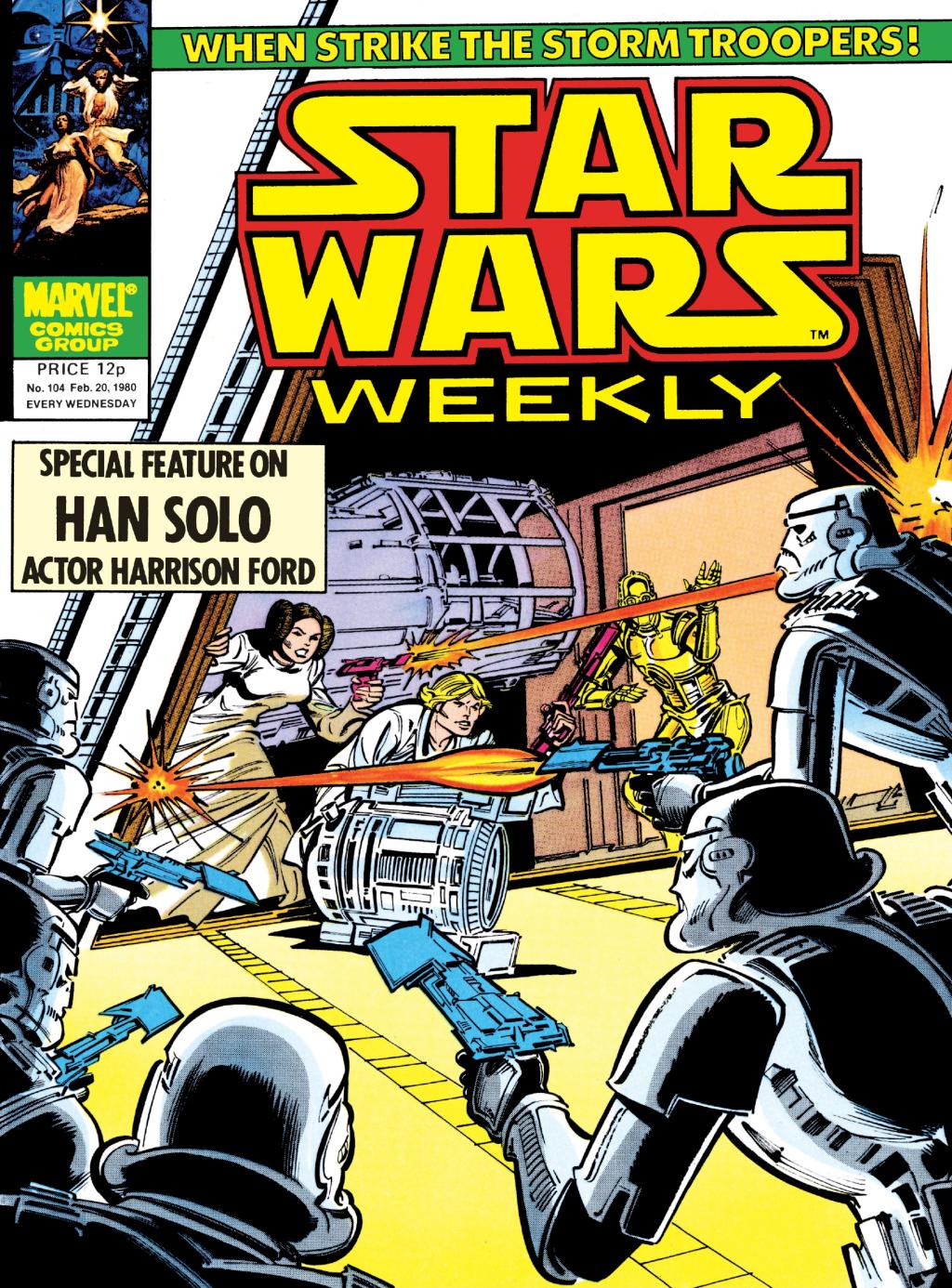 What is it ? :
Part 1: When Strike the Stormtroopers
Luke, Leia and the Droids have been meeting with a planetary governor to persuade him to join the Rebellion, however things have gone wrong and they're under attack by Imperial Stormtroopers. R2 is hit by blaster fire, and Luke must help him, leaving Leia to defend them, and she expertly guns down several Stormtrooper allowing them to escape.
They board their starship and blast into space avoiding Imperial patrols, and Luke comments on Leia's expert gunmanship, which C-3PO comments are remarkable from someone from Alderaan, a world famous for its ban on weapons.
She tells them a tale, of being on a mission as a diplomat, where a reporter shouted a question to her, pointing his camera at her, when he is gunned down by two figures. They demonstrate that the reporter was actually an assassin, and his camera was a weapon,
They introduce themselves as Gimlet and Giles Durane, who have been hired by Bail Organa to train Leia to defend herself, Durane explains he served with Organa, and owes him his life, he is usually now called, The Weapons Master.
As they speak Durane spots and guns down an observation drone which has been hovering nearby. An Imperial officer has been watching with the Head of the Assassins guild, the Empire wants Leia silenced, but without any connection to them being found so have hired the guild. The guildmaster comments on Durane being a Clone war veteran, who now works for money, but has a reputation that once he accepts an assignment he always completes it.
Aboard Duranes vessel, some time has passed, and Leia has picked up skills from the training, although Durane points out that she is hesitant with a Blaster Pistol, which she tells him is due to the personal nature of the combat. That the knowledge she would be killing someone slows her down. He tells her that's a good thing, but it may prove to be a fatal flaw. And as they speak, unseen Assassins have crept aboard the ship and are sneaking up on them.

High Points : A nice start to the story, we've got Durane, who has some history with Bail Organa, so we're discovering something about the Clone Wars, which at this point were a total mystery, and Leia's family. It's also nice to see a plot by the Empire to get rid of Leia, and the underhand methods they're using in the period before the dissolution of the Senate.

Low Points : Once again the issue is kind of short, so there's not much to criticise, however, and this is a bit nitpicky, I'm a little annoyed by the way they handle the passage of time. We move straight from the Imperial officer watching Leia and Durane via the drone, to Leia training with Durane aboard his ship. Leading me at first to think that they've only just departed the planet, then we discover that she's virtually completed her training, and at least several weeks have passed as she's learned to use not only the Blaster, but starship weapons as well. Which is a bit of a jarring change.

Oh, and again a nitpicky complaint, but Gimlet is a terrible name for a heroic mercenary.

So what do you really think ? : An excellent start to the story, we've got some history of Leia's family, and some backstory for Leia herself, plus a glimpse into the time just before the start of the movies.
Even the concept of the story is well conceived, with the writers explaining away how Leia, from Alderaan which she describes in A New Hope as a peaceful planet, which has no weapons, is an excellent shot with a blaster, and handles starship weapons like an expert throughout the comics.

Final Words : In this first part, Leia describes her tale as making her feel a little sad, so I can't imagine this story ends well for Durane and Gimlet, but we shall see.