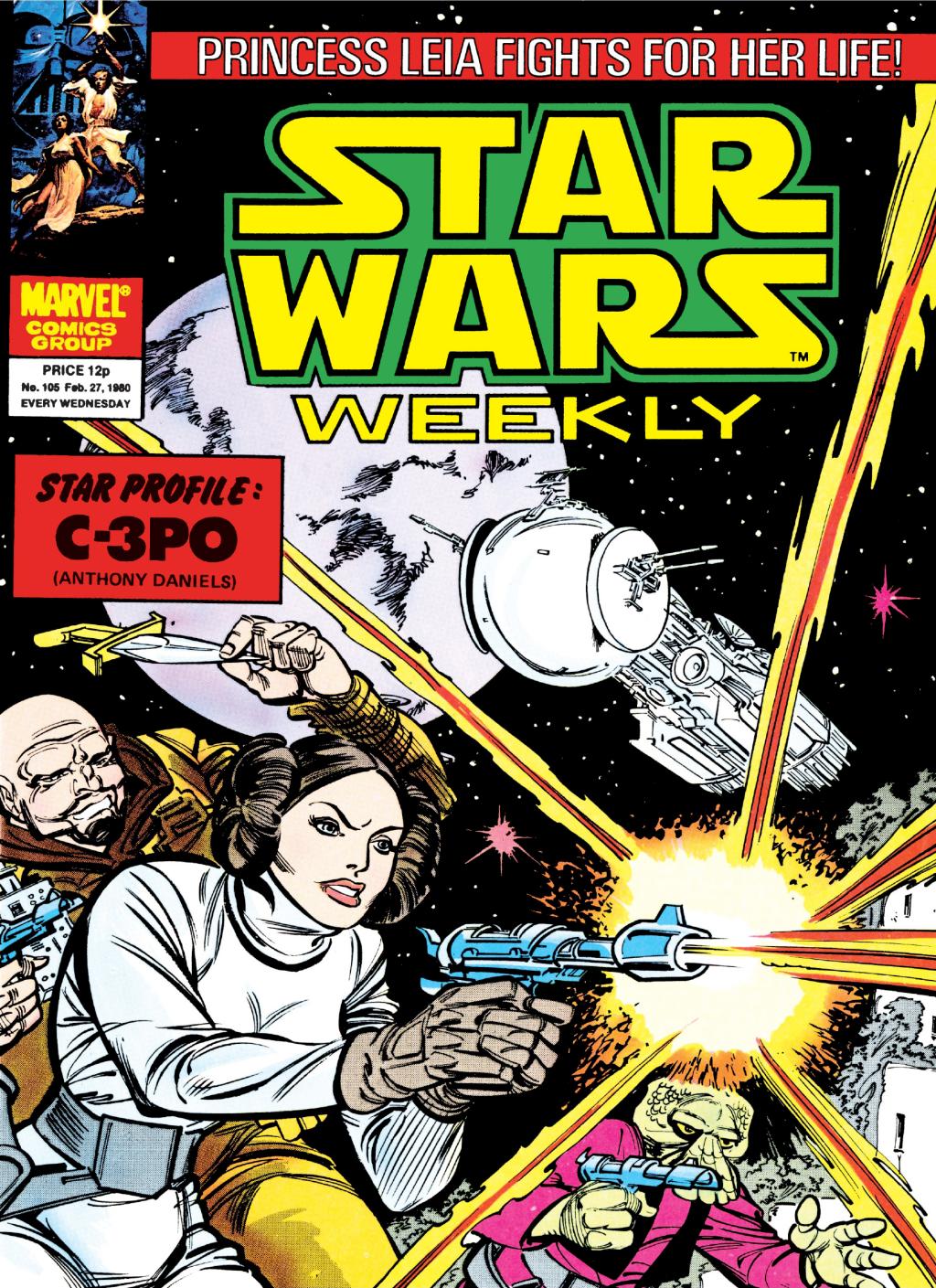 What is it ? :
Part 2: Day of the Assassins
Leia has been aboard Giles Durane and Gimlets ship training in self defence, and Durane tells her that her skills are coming together, but she is hesitant over killing an opponent, but she should prepare her weapon.
When she asks why, he informs her that his sensors have detected visitors aboard, and he shouts to Gimlet. Gimlet guns down one of the Assassins, and with speed remarkable for a man of his size and weight, Durane dispatches another using throwing disks.
He warns Leia that he has no other weapons, and she reacts quickly, gunning down a third. She feels sick having killed someone, but Durane tells her that her weapon is still on training settings, so the Assassin is only stunned. As the Assassin rouses, Durane hurls a knife from his boot straight into the grenade that the Assassin is about to throw, killing the Assassin.
Durane tells her that although the Assassins were wearing suits to avoid detection, Gimlets natural senses detected them when they boarded, and he tells her that he allowed them to attack, as he guessed that the danger would cause her to react better than any training he could provide.
When she accuses him of being cynical, he tells her that he grew cynical from being so poor that he couldn't afford to move his family when a plague struck their homeworld, and that help from her father came too late and they died. Since then he's worked for money, promising never to have to rely on anyone else ever again, and so he'll fulfil this contract and send her back to Bail Organa as capable as anyone in the galaxy of defending herself.
Meanwhile the news of the defeated Assassins gets back to the head of the Assassins guild and the Imperial General who has hired them to kill Leia. The Guildmaster promises to fulfil their contract by taking it on himself, while the General wishes he'd hired Durane himself, as at least he seems capable of fulfilling a contract.

High Points : While there's not a lot to go on within this issue, we do get a nice piece of action, where Durane deliberately tries to put Leia in danger to get her to react, and then we get some nice backstory to Durane. Discovering how he became the man he is, willing to kill for money and relying on his reputation more than his friends, so willing to do anything, making him a darker character than the usual heroes in Star Wars.

Low Points : I'm a little confused by the timeline here, as I was definitely given the impression that some time had passed between Leia meeting Durane, and the attack by the Assassins, as apparently she has virtually completed her training. But in this issue, we're given the impression that the Assassins boarded the ship stealthily at the same time they did, which would mean only a matter of hours had passed, which takes training times down to a new record even for Star Wars.

So what do you really think ? : I definitely would have liked a little more detail on the Assassins, as they're just 3 generic guys with guns, just a few lines of text to make them more menacing. Just something simple, like telling us they're trained against feral swamp cougars on Drexal, to be virtually undetectable. Or that they've sworn to the guildmaster to complete their missions or die trying, meaning no living Assassin has ever failed a mission.
Just a line of dialogue to give them some more life, that just the acknowledgement that they're Assassins and nothing more that they get in this issue.

Final Words : While definitely not being a classic Star Wars Marvel tale, The Weapons Master is being enjoyable, and providing some interesting backstory which should pay off next issue.