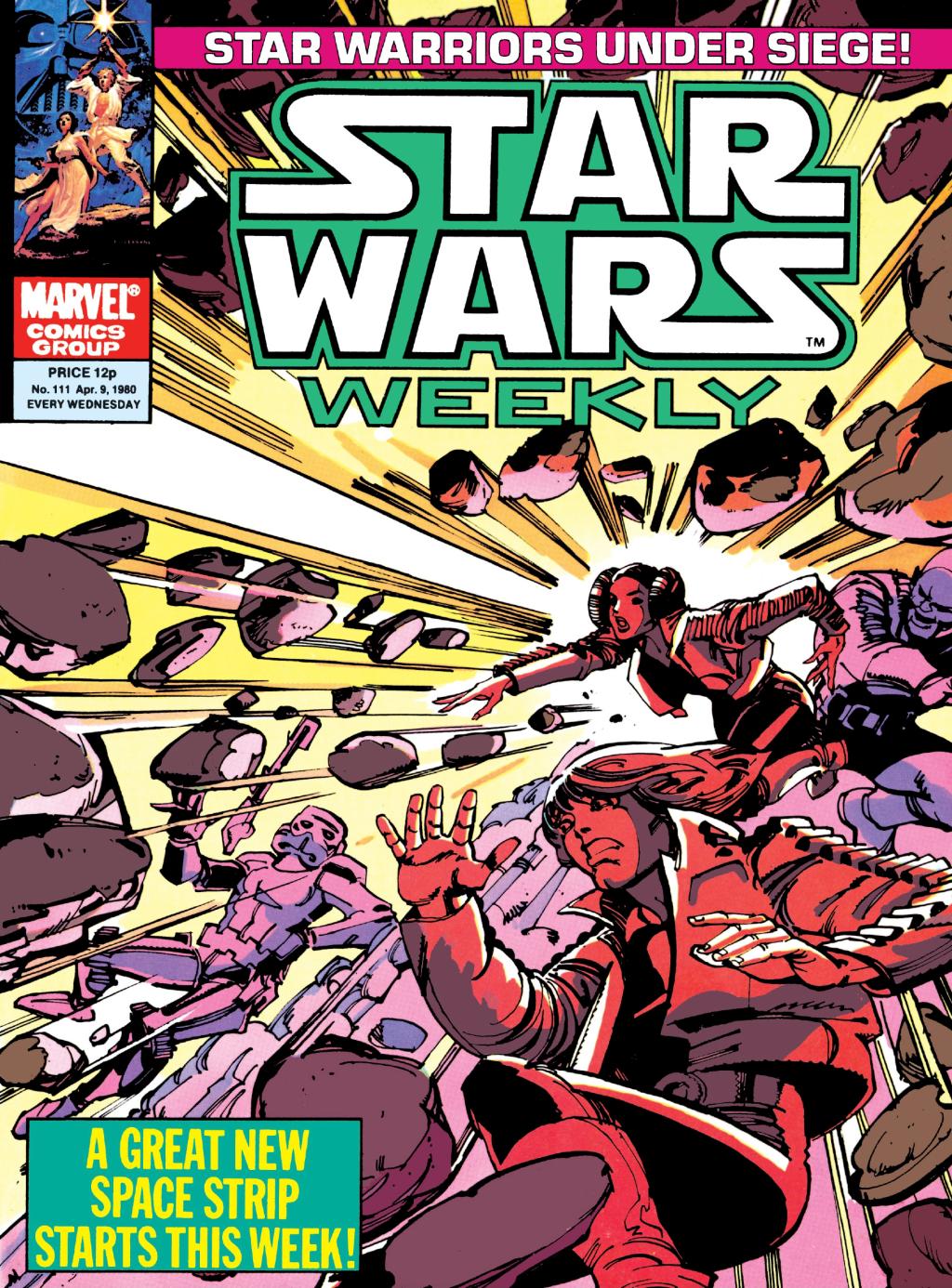 Star Wars Weekly 111: The Word for World is Death Part 2

What is it ? :
Part 2: Unholy Alliance
Luke has been caught unawares by an Imperial Trooper as he crawls from the tunnel he carved with his lightsaber to allow the heroes to escape the crashed Starraker. He is confronted by Major Grau and his men, who escaped the doomed Imperial Cruiser which was in orbit in an escape pod, and sought out the crashed Starraker.
Luke attempts to fool them into thinking he is alone, but when they threaten to search the ship, Leia emerges and is instantly recognised by Grau. One of Grau's men, Ensign Lopaki, offers to lock them in chains, but is overruled by Grau, who tells them that there's no way his group or theirs can survive the power of the weapon that destroyed the two ships, but suggests a truce until they can work together to escape this place. A plan that Leia accepts.
Luke says goodbye to the wounded Mici, telling her she'll be safer onboard the buried Starraker with the droids, but she is scared of dying alone in the dark.
The two groups trek off together, and after a day arrive at the ruins of the Rebel archeological camp and the destroyed Y-Wing from the beginning of World of Fire. As they prepare to scan the camp, the planetary weapon opens fire once again, causing a rockfall which buries the group.
One of the Stormtroopers breaks his leg, and calls to Ensign Lopaki for help, but Lopaki leaves him to die in the rockfall, and is cursed by the dying man.
However Luke senses the attack moments before is happens, and manages to help save some of the Imperials from being killed, and as they pull themselves from the rocks, Grau thanks him handing him back his lightsaber that he'd dropped.
Luke realises that the attack has come from the direction they've just travelled, and is worried about the Starraker, Mici and the Droids, but it is too far for them to do anything but try to send a signal on their commlink, however interference blocks their efforts, and they watch as another blast lashes out at the site where the Starraker is buried. . .

High Points : It's definitely a nice thing to get something new, and the seemingly (at the moment) honest Major Grau offering a truce is definitely one of them. We've had distrustworthy Imperial officers offering to work with the heroes in the past, but it's always been a matter of just waiting for their sudden but inevitable betrayal, But this time while Ensign Lopaki is shown to want to capture the Rebels, Major Grau himself seems honorable, and more focused on getting his men through this alive.

Low Points : Not a huge amount to criticise in this issue, perhaps the only thing that niggles me is that the rushed pace of getting the story told in just 6 pages means that we don't really see what Luke does to save the Imperial soldiers. He senses the attack and shouts a warning, there's a massive rockfall, and then the men are safe and Grau is thanking Luke for saving them. Did he hold the rocks back with the force?, did he spot some shelter from the falling rocks?, we're not shown or told, which is pretty annoying.

So what do you really think ? : A very solid issue, introducing a couple of interesting characters, and a number of background characters, making this one of the more populated stories I've seen int the Marvel comics. For example, we've got Major Grau and Ensign Lopaki, who are shaping up to be the main characters among the Imperials, but this issue we also had Anarine, the Imperials sensor operator, and Boaz the unfortunate Stormtrooper who Lopaki let die, who cursed Lopaki's betrayal.

Final Words : So we've reached the middle of this 9 part story, and I have to admit that it's coming along really nicely, one of the better stories across all of the Marvel Comics. Of course the fact it's guest written by Chris Claremont probably helps, and his talents are on clear display here, as each of the parts is providing clear story progression, and we've got some interesting characters.