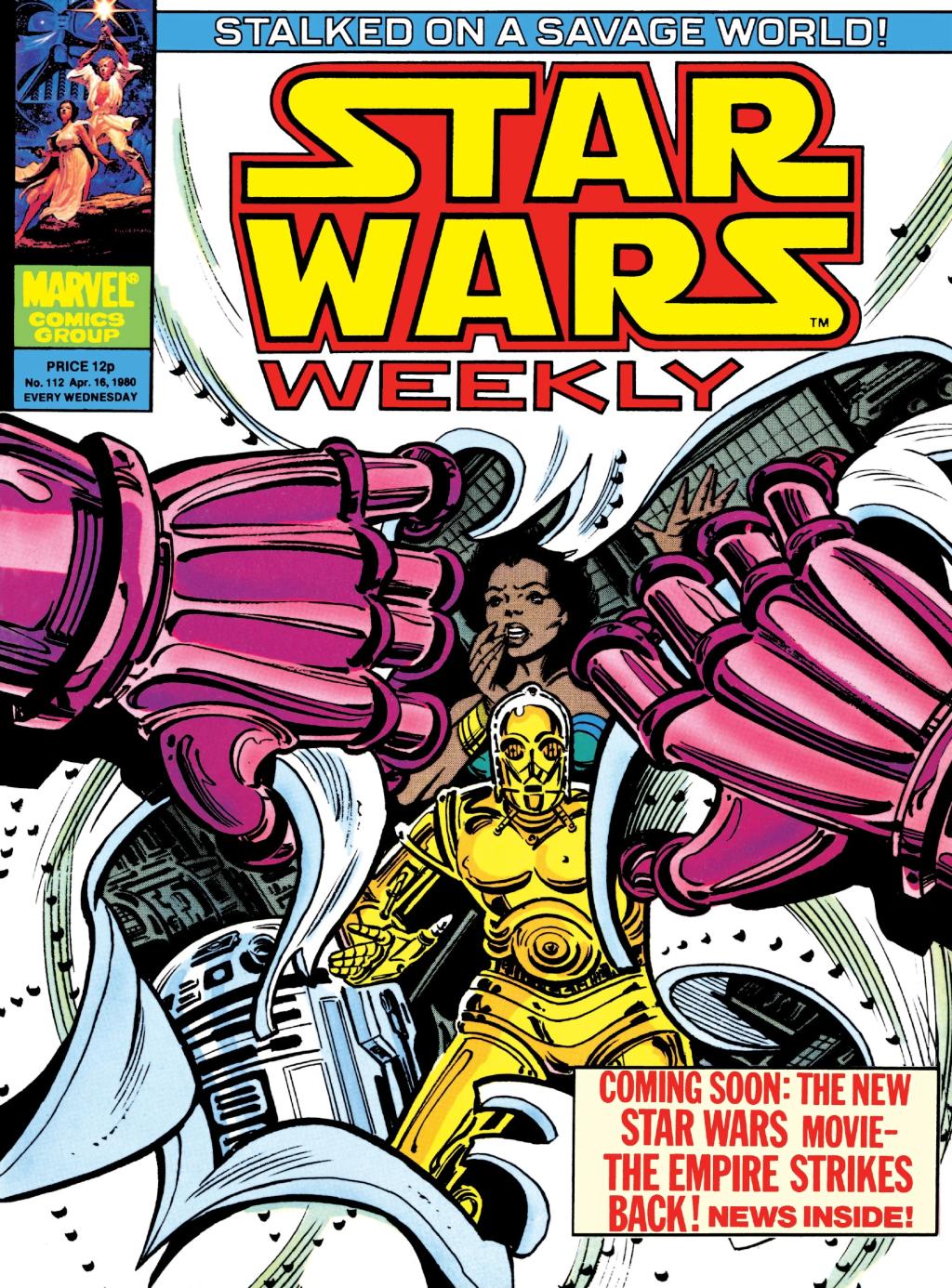 Star Wars Weekly 112: The Word for World is Death Part 3

What is it ? :
Part 3: A Creature in the Stars!
So as Luke and the others watch as the planets weapon fires on the crash site where the Starraker lies entombed. Aboard the vessel, Mici, R2-D2 and C-3PO watch as they can see daylight once again as the rock is cleared from above them. R2 senses a powerful energy field approaching their main airlock, and he jabs a fearful Mici with one of his probes, and she collapses to the floor, C-3PO scans her and senses no lifesigns, accusing R2 of killing her, as R2 shuts C-3PO off, before finally switching off himself.
A creature board the ship, and examines Mici's body, but after discovering nothing living aboard, it leaves, heading for the Rebel Archeologists Camp. R2 and C-3PO awaken, and C-3PO realises that R2 had just put Mici into Bio-Stasis, which makes her appear lifeless, as they did too while shut down, but he worries about Leia and Luke who won't be able to do the same trick.
Back at the camp, Leia discovers one of the researchers notes, which discusses a breakthrough of a barrier around an alien city, which leads them to a tunnel in the base of one of the domes.
As the two rebels, and the Imperials explore the tunnel, they leave one of the troopers behind to guard, Corporal Djambo, and Ensign Lopaki schemes to kill the Rebels in the dark tunnels below.
They soon discover the body of one of the Rebel researchers next to the barrier that was mentioned which seems to have been breached, and Leia ponders whether the barrier was designed to keep everyone out, or whether the city was a prison and the barrier was keeping something in.
Behind the group, Corporal Djambo is ambushed by the creature, which chuckles over him, before sensing the others ahead of it in the tunnels, where it intends to kill them all.

High Points : Whereas my compliments have come easily for all the other parts of this story so far, I'm struggling a bit with this one. Because while it moves the story forwards easily and smoothly, and we definitely feel that we're discovering more, it raises more questions than it answers, and there are some problems with the two different sections of the story.

Low Points : Firstly we've got the fake scare that for some reason R2 has become a murderer, which doesn't even seem to be a possibility to me, as he puts Mici in Bio-Stasis, but is accused of killing her by C-3PO. How did R2 know that the creature would ignore lifeless bodies, how did he know it wouldn't just eat her?
In fact the creature is entirely problematic in this issue. We've not heard mention of a creature before R2 detects it, there's been no mention of bodies looking as if they were ripped apart by claws, only that they were ripped apart, which up until now I thought was presumably by the explosions from the weapon.

And Leia's theory that the barrier around the city was making it a prison, not a fortress, is just too on the nose for someone who at this point has no idea that anything has left the city.
Both R2 and Leia are too presentient here, and it come across as just being too convenient, and lazy writing, with their assumptions informing the reader, not being informed by what they've discovered.

So what do you really think ? : Well, I definitely didn't enjoy this issue as much as the other parts of the story that I've read so far, but that doesn't mean it's terrible. The story keeps on going, and the mystery of the underground city is an interesting one, even if the creature has just suddenly been dumped into that mystery.

Final Words : So that ends the second segment of this story, "The Word for World is Death!", and we are moving onto "The Guardian of Forever", which I'm pretty darn sure is an Original Star Trek episode . . .