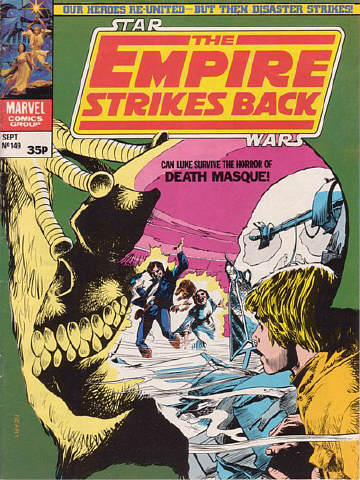 What is it ? : Luke is on patrol in his X-Wing when he gets ambushed by Two Imperial Battle Cruisers and Four Squadrons of Tie Fighters in the remote Lapez system. The Captain of the Flotilla, Dirk Balor, recognises that it's Luke piloting, be Lukes Bionic hand, and orders Altin Wuho to use Reist, his Nightmare Demon to kill Luke.
Altin takes Reist through the ship, restrained by a metal helmet and an energy field, the crew still recoils in horror and hatred of the small monkey-like creature.
Reist is released in a pod, which docks with Luke's ship as he outmaneuvers the Cruisers and Fighter using his Jedi Reflexes, but his X-Wing is damaged, forcing him to crashland on the surface of Lapez 3.
On the planets surface he sees that his fighter is wrecked, and the terrain around him is covered in skull-like rocks and horrific, before he finds a freshly dug grave with a headstone with his own name on it.
Meanwhile aboard the Cruiser, Captain Balor refuses to travel to the planets surface to collect Luke's body before Wuho has hooded the Nightmare Demon once more.
As Luke explores he encounters Han and Chewbacca who are gunned down and killed before his eyes, and he wonders how they got there, before finding the Millenium Falcon which is even more damaged than his own X-Wing.
As he looks on, Leia shouts out to him before she is caught in a Neutrino Grenade explosion, which causes her body to decay to just bones as Luke holds her in her final moments. As he shouts out, he is approached by Darth Vader who unmasks himself revealing his face to be that of Death itself, and Luke flees.
He is hunted through the Skull-like rockfield by Stormtroopers finding no refuge from them, he sees a vision of Ben Kenobi, who tells him to submit to the will of the force, and Lukes vision clears, showing him that he is still at the wreckage of his X-Wing, but the Nightmare Demon is squatting on his paralysed body sending him the visions.
Reaching out with the force, he activates his lightsaber, mortally wounding the creature and freeing himself from it's control. He discovers his X-Wing isn't as badly damaged as he was led to believe, and that is only needs a stabiliser chip to function again. But he doesn't have time to deal with that, as an Imperial Shuttle lands on the surface nearby, obviously to collect the Demon and Luke's body.
A single figure leaves the shuttle and begins approaching Luke's crashed X-Wing, and Luke prepares to sneak aboard the shuttle, planning to fight whatever troopers are aboard and steal the ship, when he receives another vision.
Reist, the Nightmare Demon sends him a message telepathically, telling him it wants revenge on the person who has kept it captive and that it hates, and that he carries the chip Luke needs on his person. Luke sneaks up and ambushes Wuho, but he reacts with supernaturally quick reflexes, shooting the blaster out of Luke's hand. So Luke throws his Lightsaber, which spears Wuho, revealing that he's a droid.
Luke recovers the required chip from Wuho's body, a standard part of droid construction, and repairs his fighter, pausing only to bury Reist, and leave a headstone before departing the planet.

High Points : A well told and really interesting story, with Reist, The Nightmare Demon, and Alton Wuho, the Human Replica Droid, both being central to the story without overloading us with backstory or information. This is definitely an issue which leaves us wanting for more, if not more story, but more information. Who built Alton? How did he end up with Reist? it makes total sense that a creature which can control people's nightmares would end up being captured by a droid which has no nightmare to control.

It's also really interesting to see the writers version of Luke's Nightmares, with Han and Chewie being gunned down, but Leia being made to decay and rot before his eyes. Strange that Vaders face is that of Death, rather than his own face, but perhaps they were told to keep away from the comparisons of Luke and Vader, so that could be left for Luke's moment of realisation in Return of the Jedi.

Low Points : To a certain degree my only criticisms of this story are about the visualisations of doom and death being very real world rather than Star Wars'y. Vaders face is seen to be that of Death's, and is that of a skull, which makes me think of Death/The Grim Reaper. But we've never been shown whether there is any myths of a Grim Reaper like figure in Star Wars, although I suppose that it could just literally be a representation of death as a dead person.


So what do you really think ? : A really solid story, by one of my absolutely favourite comic writers, Steve Moore, who sadly passed away in 2014. Moore created (along with the also sadly deceased Steve Dillon) the Doctor Who spin off character Abslom Daak, who is one of my absolute favourite characters of all time, a Chainsaw wielding psychopath who is sentenced to death for murder, death by DK, Dalek Killing. Where he's sent to a Dalek controlled world to kill as many Daleks as possible before they kill him, something he proves to be extremely capable at.

This story really has the darker tones of a Steve Moore story, although lacks some of his more humorous touches, but this is extremely early work by the man, so perhaps he hadn't developed that by this point, or wasn't confident enough to bring dark humour to Star Wars. But otherwise, an interesting story which leaves you believing it comes from a much larger universe, and it introduces some ideas which were developed much further many years later.

Final Words : I just realised that I was about to start reviewing the next few stories out of sequence, as I'm working from the compilation book, Star Wars: Wild Space Volume 1, which reprints these stories.
However, the book reorganises them, to make the next few stories form their own tales, but were not printed in the book in the same order they were published in, so
Wild Space orders them in the following sequence 155, 153, 157, 159, and then 156, 151, 154.
Now while it would probably be easier for me to just review them in the order in the book, I actually want to keep going in the same order as I originally read them in, so there's going to be a bit of jumping around.