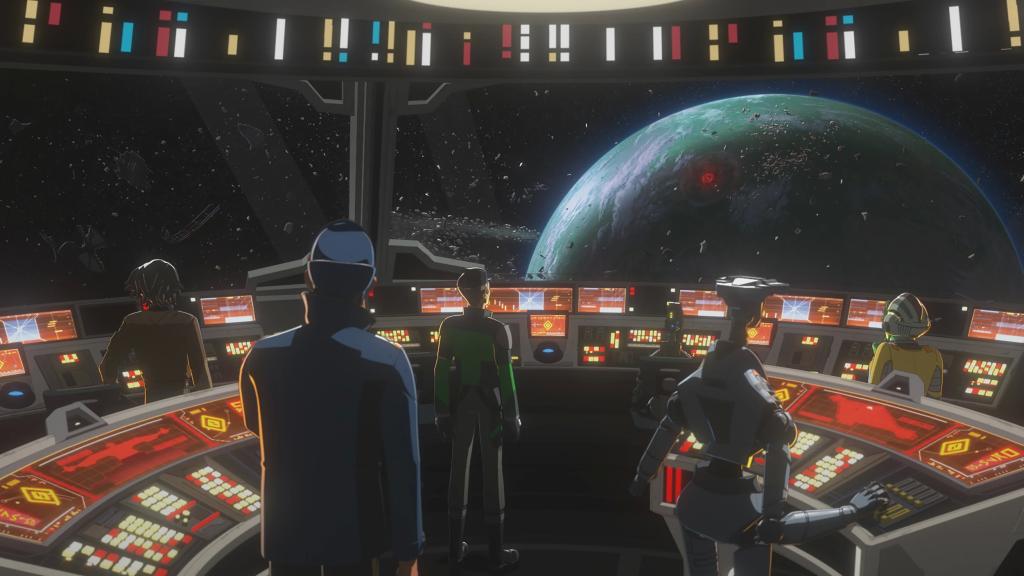 What is it ? : Tam is aboard the Resurgence class Star Destroyer where she is based, and removes her Commlink from the locker where she left it and begins replaying the message from Kazuda which he sent last episode, he apologises to her for lying. But it is overheard by another student, who tells her she must report the message, or he will be forced to, something she reluctantly agrees to.
Meanwhile aboard the Colossus, Kaz and Neeku are in Aunt Z's bar watching the drunken pirates and crew enjoying themselves, but when they attempt to join in they are told that the bar has just run out of drinks. As they comment that the station is running out of supplies, Kaz assures everyone that the Resistance will be able to resupply them, and he is then summoned to the bridge.
He has received a message, and when they open the communication, Kaz discovers that it is his Father, who was offworld with his family at the time of the destruction of the Hosnian System. He tells Kaz that he has no idea what he has gotten himself into. The transmission begins to fade. Hamato tells Kazuda that the First Order has identified him and that his actions have put his whole family in danger and that there may be bounty hunters coming after him. Kaz tells him he'll be safe at D'Qar, but his father warns him that it's not safe and to get as far away from D'Qar as possible.
However the Colossus has made the journey sublight to D'Qar, and they discover the Resistance base is gone and a large wreckage field is in orbit. Captain Doza suggests making the jump to hyperspace in case any First Order patrols remain, however he is informed that they are completely out of Hyperspace fuel.
Kazuda suggests salvaging the remains of the First Order Dreadnaught which is in the debris field, as it should have supplies of fuel and other necessaries aboard.
Recruiting the Pirates with promises of salvage, they depart the Colossus and board the wrecked dreadnaught.
Tam reports to Agent Tierney and hands over her Commlink reporting Kaz's message, and Tierney and Commander Pyre discover the signal has come from D'Qar, and make the jump to Hyperspace to intercept the Colossus.
Kaz, Neeku and the Pirates raid the wrecked ship for supplies and locate the Coaxium Fuel they need, however removing it from storage renders it volatile and dangerous once more, but as the First Order arrives, Kragan the pirate leader just yanks it out of the storage and it begins to glow red.
The Colossus scrambles the Aces to defend them against the First Order, but despite their skills, they are vastly outnumbered, especially as the Ace's aren't really used to opponents who are shooting to kill.
Everyone returns to the Colossus with the fuel, and as Neeku installs it in their Hyperdrive, the massive vessel loses it's shields and takes some serious punishment from the pounding weapons of the First Order Star Destroyer. However, their Hyperdrive soon activates once the fuel is installed, and they make the Hyperspace jump away from D'Qar to safety.
Aboard the First Order Star Destroyer, Commander Pyre recommends that Tam receives conditioning, but Agent Tierney tells him that she needs her unchanged, as her anger at her friends will serve them.

High Points : Well, Wowzers, another good episode of Resistance. The story of the vessel fleeing from Castillion continues and is proving to be an interesting one. Now I'm aware that the series is skirting about the upcoming Rise of Skywalker movie, not wanting to reveal any details of the movie, and only working with what we know from The Last Jedi.
So while we know the Dreadnaught was destroyed above the abandoned Rebel Base on D'Qar. But they're being very shy about any revelations for the new movie, for example, last episode we had Captain Phasma issuing orders to Pyre and Tierney. But we know that she apparently dies in The Last Jedi, but they don't want to spoil whether she has miraculously survived, or whether she is indeed dead before The Rise of Skywalker is released, so we don't have her mentioned at all during this episode, even though she possibly just died.

But, I seem to off topic.
This episode does a lot right, we get Kaz actually discovering the fate of his family, but putting them into hiding and at risk due to his actions. And unlike much of last season he's getting to be heroic. In fact, while there's some buffoonery going on it's mainly by Kragan and Neeku, who are generally more suited to this kind of activity, as it doesn't diminish their characters. Neeku is childishly naive, but is technically very competent, and Kragan is a impulsive thug, but he's a useful thug at that.

Low Points : Well, let's start my moaning where it starts every episode recently, with Tam. Even though Kaz has endangered himself and everyone they know to apologise to Tam, she still hands over the data and collaborates in bringing the First Order to the Colossus to destroy it and kill them all. At least finally Kaz is beginning to see her for the danger she represents, I really don't think I'm going to be able to find any redemption for her character in the series, as not only has she always been horrible to Kaz, but now is showing her true nature.

So, the Colossus, a giant refueling station has run out of fuel and other supplies? But the reason that the First Order are chasing it, and Captain Phasma issued orders that it was to be captured or destroyed, to deny the supplies to carries to the Resistance.
Which leaves me with a question. Is the First Order just totally wrong about the Colossus carrying supplies? Or has the series just forgotten that these two things seem to be contradictory. Either the Colossus has supplies of value to the Resistance, or the Colossus is short of supplies. It cannot both supply the resistance with fuel and other resources, while needing to be supplied from them.

Ok, so the Ace's are ridiculously outnumbered, to such a degree that it's nearly pointless them being there at all, since there's only a half dozen of them, against the 144 starfighters that the Resurgence Class Star Destroyer can launch.
So, let us say that they can provide some kind of tactical cover in escorting the supply shuttle, but if they're such better pilots then why does each and every one of them crash when they're landing. They're racing to get inside before the blast shields close, but it still seems clumsy and poor piloting to me, especially considering that a Star Wars Starfighter can hover on the spot and VTOL land. But instead each of them crashes to the deck, skidding against the back bulkhead.

So what do you really think ? : A solid and enjoyable episode, carrying the storyline of the series onwards. I've been simultaneously impressed with what they're showing and annoyed at what they're not willing to show in the build up to The Rise of Skywalker. But perhaps we're still very early in the season to be making these conclusions.

Final Words : So next episode we get Live Fire, with Yeager and Kaz officially joining the Ace's, which hadn't occurred to me that it hadn't happened, but at the same time makes a lot of sense, while at the same time seeming to be a little pointless that someone needs to officially join the squadron which is defending their home. Also we'll get Tam training as a First Order Pilot, which seems to be an interesting idea, and one I hope is explored in some detail.