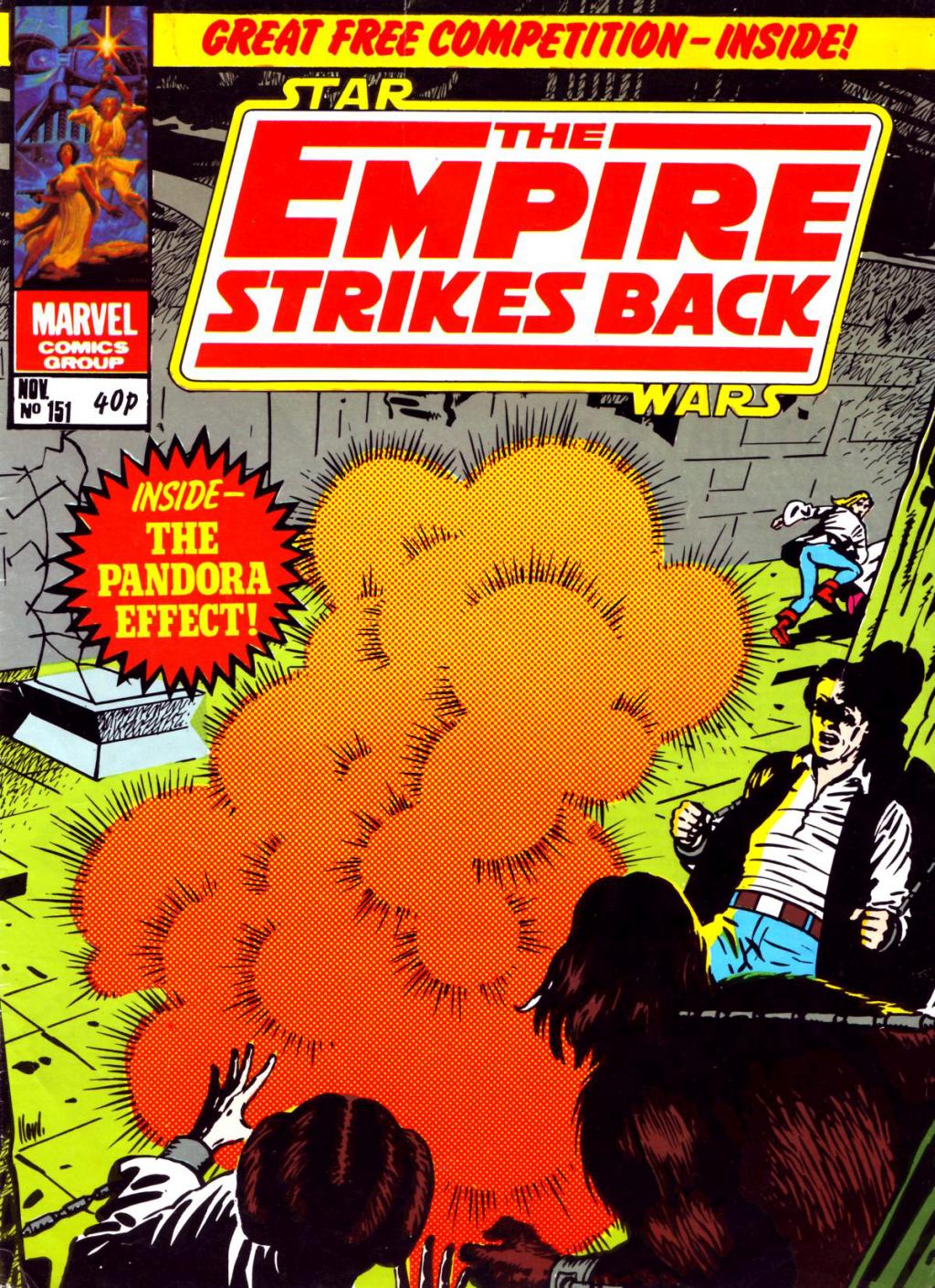 The Empire Strikes Back Monthly 151: The Pandora Effect

What is it ? : Han is taking Leia to a trade conference on Daalang, but has stopped off on Attahox to smuggle some Phosovane salts, which are used to make medical supplies, but he can make a profit on.
As they leave Attahox, they are followed by a ship which Han is concerned is Vor Childermoss, a renowned pirate who is known for his violent nature, so Han turns for the Hellhoop, an asteroid field with an evil reputation for ships disappearing in it. Vor Childermoss follows them, putting one of his own crew to death when they suggest turning back, but both ships are swallowed by a massive vessel which defies description, which twists space and disappears after seizing the two ships.
Han awakens and is confronted by The Five, individuals who claim to have retired from universal life to another dimension to rest through the centuries gathering things of interest here and there from the Universe. Han asks if they are some kind of religion, to which they tell him they worship Evil.
Vor Childermoss is there as well, and he and his men pull blasters on The Five and threaten them, but The Five display ways of agonisingly killing all of the Pirates without being threatened by the thugs at all.
The leader of The Five, Suzal, asks if Leia and Han will accompany him, and when Han inquires as to whether Chewbacca should accompany them, Suzal expresses that the beast should not, and will be put on display in their zoo.
Leia expresses concern, but Han quietens her, telling her that The Five don't recognise Chewbacca as intelligent, and that's their only advantage at the moment.
While Han and Leia are tortured as The Five attempt to break their minds, Chewbacca frees himself from his chains in the Zoo, and seeks a way of escaping. He encounters an energy cage, which contains a Demon, a creature which could devastate a planet, perhaps too dangerous to free, but desperate times seek desperate measures and he frees the creature, hoping it will seek revenge on The Five instead of hurting his friends.
Almost immediately the escape is discovered by two members of The Five, but the demon destroys one of them while the other flees to warn the others. Han's spirit is almost completely broken, but Suzal is attacked by Chewbacca stopping him hurting Han any further.
Suzal turns to attack Chewbacca, but he is warned the Demon has escaped, just before it vaporises yet another member of The Five. They attempt to fight the creature off, but it destroys them all in horrific ways, as Han and Leia watch in horror.
The Demon, Wutzek, comments on The Five being made from frail flesh, before turning to it's saviours and threatening them. Even though Wutzek claims that gratitude is foreign to it, he allows them to take the Millenium Falcon and leave, returning them to real space before destroying The Five's ship.
Leia is concerned about them freeing such a powerful and evil creature, however Han is just glad that they did it deep in Imperial space. . .

High Points : This feels somehow more like a Star Trek story than a Star Wars one, but somehow manages to fit in perfectly. This tale, where powerful godlike aliens are undone by their underestimation of the heroes, most specifically Chewbacca, really doesn't feel like standard Star Wars fare, however the mental torture of the heroes, and their willingness to fight for each other, them unwittingly releasing an evil upon the galaxy, makes it feel far more like part of the same universe.

And I have to complement the characters of The Five, and of the demon Wutzek. Although they're not given much space to be fleshed out, there's enough here to tease the reader with far more background that we don't hear. Where did they come from, how did they achieve this power, and how did they manage to cage Wutzek in the first place? We aren't told any of this, but it feels as if there's a reason, but we just aren't given time to hear it.

Low Points : And to a certain degree that's the problem with this story, it packs so much in and gives us so many interesting new ideas, without giving them space to grow and get some meat on their bones. What we have in this story is the thinnest veneer of a background story as we don't really discover anything much about The Five, did they originate in the Star Wars galaxy? how long have they been alive? how did they get their ship? how did they capture Wutzek? do they know anything of the Star Wars galaxy, such as anything about the Jedi or Sith?
We don't find any of that out, and while it leaves us wanting more, I suspect that we'll never hear anything of these being again, and I'd definitely like to at least have the heroes have to deal with Wutzek again, tidying up the mess they just made.

So what do you really think ? : Another solid story, and it comes as no shock, as this issue was written by Alan Moore, the writer of The League of Extraordinary Gentlemen, Watchmen and V for Vendetta. The exploration of evil comes as no shock from Moore, and this more grey version of the universe, where the heroes make deals with evil, to save themselves from other evils, is an interesting direction for his stories to take (and we've got a few from Alan Moore coming up in the next few weeks).
Although I'm doubtful that we'll get any further mention of the characters from this issue, knowing the way that Moore writes, I hope we'll get some tangential references which will help us explore the elements he's introduced more closely, perhaps in other members of the same species, or a return to their dimension . . .

Final Words : I really enjoyed this one, and Alan Moore's involvement wasn't something that I knew about when I started reading, but one that made a lot of sense when I discovered it later. A highly recommended tale.