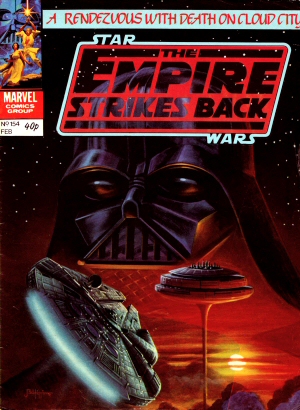 The Empire Strikes Back Monthly 154: Tilotny Throws a Shape

What is it ? : Leia is being chased by Stormtroopers across the surface of a small planet, she has injured her ankle and doesn't think she can escape them, when she encounters the remains of some Stormtroopers. The armour and remains are weathered and aged, and Leia is confused as they appear to be thousands of years old, predating the Empire and the formation of the Stormtroopers by a long way.
Elsewhere on the planet, a green ghostlike alien appears calling itself Tilotny, and it congratulates itself for throwing a shape. It boasts that it has created things with edges, and things are happening one thing after another, so it has created time, an accomplishment that another of its kind, Horliss-Horliss has never managed.
Then Horliss-Horliss appears as a abstract pattern and berates Tilotny for not recognising the cleverness of it's shape, but Tilotny complains that now everyone is doing it and spoiling the new idea, as a pink cone, Splendid Ap, and a black disk with a stylised face on it, Cold Danda Sine, appear.
The creatures discuss the place they are in while Tilotny tries to claim she created it, while Horliss-Horliss thinks she only discovered it.
As they experiment with their powers and their environment, Leia stumbles into the clearing where they are. Tilotny claims to have created her, and they instantly discuss the crudeness of her existence, while Tilotny claims to have created her with a subtle elegance the others are missing.
But as the Stormtrooper chase Leia into the clearing, the other creatures berate Tilotny for being repetitive and creating more shapes the same as the first. The Stormtroopers are astounded by the creatures, but think that they may be holograms, so prepare to open fire.
But before they can, Tilotny changes their leader to diamond to make him different to the others, and Horliss-Horliss notices that Leia has soft things inside her to keep her alive, so makes one of them hard to see what will happen, transforming her heart to diamond as well, killing her.
The other Stormtroopers attempt to flee, but Tilotny decides to merge them all into one multi-limbed monstrosity which also dies, boring her. Horliss-Horliss tells Tilotny that she made this mess, so she must tidy it up, but she refuses, telling Splendid Ap that it must do it.
The shapes depart, leaving Splendid Ap to tidy up the mess, which it does to the best of its knowledge, reassembling and fixing the Stormtroopers and putting them back into the world, however with no real understanding of time, they are deposited many thousand of years in the past.
Leia awakens with the knowledge that she died, lying next to the thousands of year old remains of the Stormtroopers, but decides that being alive is more important than knowing what happened, so hurries on to new adventures.

High Points : Errrr . . . . . Wow . . . . I think.
This is definitely one of the weirdest Star Wars stories I've ever read, the tale of beings from outside time and space appearing, experimenting on Leia and some Stormtroopers and then putting everything back again (with one minor mistake) and leaving.
While in recent issues we've had Demons and other powers, it's difficult to relate Tilotny and the others to these, as even though the Force Sensitive Demon from a few issues back had the power to snuff out a planet, Tilotny can shape space and time to her will, and therefore seems infinitely more powerful.

Low Points : It is a bit of a mess, and doesn't really fit into the Star Wars universe that well. But it's one amazing delightful mess.

So what do you really think ? : It's a fantastic story, and one I had difficulty ranking. It's an amazing Sci-Fi story, with mind blowing concepts, but it's not really Star Wars. So while I'm tempted to mark it down, the ideas are so amazing, and it's fascinating read, which leaves me unsure if it should be a 6 or a 9, so I split the difference.

Final Words : Well, it's an Alan Moore story, which explains the amazingly high concept behind it, and the fact he doesn't want to be limited by the format or the Star Wars universe itself. Moore has always been one of the most amazing writers in comics, and Tilotny throws a Shape is definitely an early example of his weirdness and imagination. I really loved it, but aren't sure if I recommend it. . . .