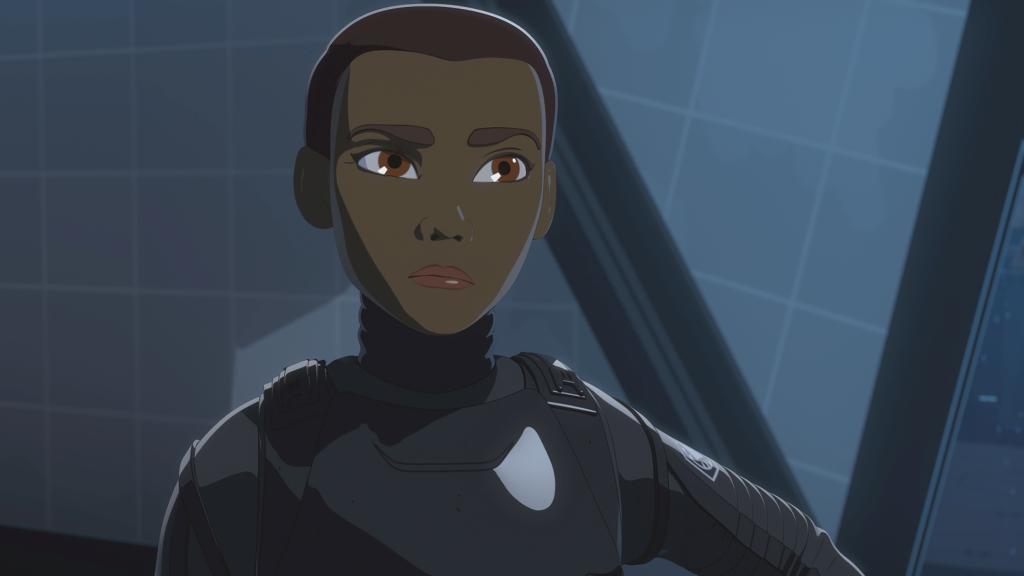 What is it ? : The Aces are resting in their lounge aboard the Colossus, discussing how the First Order nearly defeated them during their last encounter, while they are all excellent racers, they aren't combat pilots. When Captain Doza enters, and announces that the Aces have a new Wing Commander in Yeager, and a new pilot in the shape of Kazuda, which the Aces are extremely unhappy with, insulting Kaz by calling him a Kaz-trastophe..
Meanwhile aboard the Resurgent Star Destroyer, Tam and Jace Rucklin are made part of a cadet squadron, Tam drops her helmet and is berated for being out of uniform.
Yeager calls the Aces together for a briefing in his garage, which the Aces are unhappy at being forced to rough it, and Yeager has set up a training mission of him and Kaz against the rest of the Aces around a nearby Ice Moon with the ships using stun weapons. The Aces are dismissive of this, but Yeager wishes them luck.
Around the Ice Planet, the Aces wait for Yeager and Kaz, wondering where they are, but the two ambush them. While the Aces each try to get the kills on Yeager and Kaz for themselves, the two pilots lure the Aces into each other's gun sights, and easily win the training exercise.
Tam and her squadron are briefed that they will fight Drone fighters with real weapons, as real opponents don't use training weapons, the pilot with the most kills will become Wing Commander for the squadron, and Tam easily manages to get the most kills, but Jace Tie is damaged and he ends up heading for destruction on the Star Destroyers hull. However, Tam manages to save him, but at the expense of not destroying all of the drones.
Aboard the Star Destroyer, although she got the most kills, their commanding officer tells her she won't get the Wing Commanders position because saving Jace meant that she endangered the mission. As they are dismissed, Jace tells her that he probably wouldn't have done the same for her, although he does seem somewhat ashamed by this.
The Ace's prepare for another training mission, but Hype isn't happy with the way the training is going, and even less happy when he is teamed up with Kaz. As they weave through the ice towers of the moon, a large creature swoops out at the fighters, seizing Yeager's fighter in it's mouth. The Aces reactivate their weapons and fire at the creature to no effect, but Hype realises that their weapons are capable of damaging the ice towers which could hurt the creature. So they all focus their weapons together on one of the towers, causing it to collapse, and causing the creature to release Yeager.
They return to the Colossus, and the Ace's accept Kaz into their number as he has proven himself in battle, pushing Hypes plan forward to the benefit of the entire team, while Neeku looks on happy for his friend finding acceptance.

High Points : A reasonable episode, but one that takes a giant step back for the series. Kaz has proven himself an excellent pilot numerous times racing with the Aces, and flown alongside them in battle a couple of times. And while him "becoming" an Ace is maybe something they'd be resistant to, but I still find it a massive step backwards in their relationship that Hype and Torra especially wouldn't be accepting of him, given he's personally rescued them both from imprisonment, never mind saving their lives and the station a number of times.

Oh, I totally forgot to mention last episode that the other Pilot that Tam is training with is Jace Rucklin, the Elijah Wood voiced pilot who stole Jeagers Hyper fuel back in season 1, and swore revenge on Kaz. So it's nice to see him and Tam getting on so well.

Just when I begin complimenting the series for making progress, they undo that progress.

Low Points : Early in the episode, Hype orders a drink from Aunt Z, and is disappointed when she says all she has is water, and that if supplies dry up any more then she'll need to start charging even for that.
Ahem. Back on Castillon, a WATER world, Kaz ordered water from Aunt Z's bar, and was so poor he couldn't afford a whole glass. So now they're in space and resources are low she's suddenly stopped charging for water?

While it's great to see Kaz and Yeager getting membership of the Aces, something I thought Kaz was destined for from the start of the show (I always thought it was going to be about some fighter pilots that pretended to be racers by day, but were daring Resistance pilots by night). But I have to question the excuse that Captain Doza gives, that the Aces aren't experienced combat pilots, so need Kaz and Yeager. Yeager hasn't been a combat pilot since the fall of the Empire, and if he's an acceptable combat pilot, then Griff Halloran should definitely be, as he was an Imperial Tie Fighter Pilot, so probably has more formal training that Yeager, which makes me really confused as to why Griff is considered untrained as a combat pilot?
Also, haven't the Aces been flying escort missions for the freighter to and from the Colossus for ages? While that doesn't amount to formal tactical training, they've definitely got combat experience flying as a squadron, so don't really know what extra that Yeager and Kazuda bring to the team except more of the same.

Well, as I've stated above, I'm obviously not happy with the lack of comradery between the Aces and Kaz. They've fought at each others sides last season, and saved each others lives among others flying together. But now they're squabbling like kids, which has always been one of Resistances worst features, I'd much rather see heroes working together doing heroic stuff, than watching them moaning about having to do heroic stuff together.

And oh, boo hoo, Tam is being treated badly by a drill instructor during training. Isn't that just the way that every military trains its people, breaking down their old habits and retraining them with tactics that the military uses and can trust?

So what do you really think ? : While not as bad as a number of episodes last season, this is definitely the worst so far this season. I understand that showing Tam and Kaz both doing the same type of thing so we can compare the First Order and the Resistance. But to tell the truth, Hype and the other Ace's treat Kaz far worse than Tam's squadron mates. And while Yeager is a better and more supportive commander than Lieutenant Galek is, she doesn't seem especially bad, especially considering Tam was abandoning the mission she'd been given, something that you'd expect a pilot to receive a dressing down for.

Final Words : Well, next episode we've got "Hunt on Celsor 3", where the pirates offer to find food, but Kaz doesn't trust them. Which to tell the truth doesn't sound a whole load better than this weeks, as the Pirates have nothing to gain by turning on the Colossus, especially with the full might of The First Order hunting for them.
This is really starting to sound like the series is just treading water, as it can't reveal any new information, until Rise of Skywalker is released in December, so the episodes we're going to get until then won't have a whole load of progression of the plot.