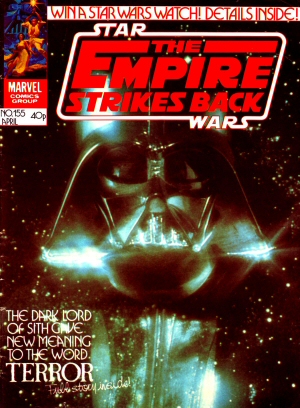 What is it ? : Darth Vader has gone to the world of Cheelit, after receiving a challenge to play the game of Firepath from the leader of that world, Dhol. The game appears to be a full room sized version of Chess, but where the pieces jump from dot to dot, and are incinerated by a column of fire when a piece is taken.
Dhol and Vader discuss the game and the various strategies they are using, when Vader admits that he hasn't just come here to play Dhol, but also to face the Guild of Vindicators who intend to kill him.
Outside two patrolling Stormtroopers encounter a robed figure, who causes them to see their own guilt, which overwhelms them, causing them to commit suicide rather than continue to live with the guilt, whether that guilt is wartime atrocities, or neglecting their own mother.
And the story intercuts between the figure moving through the palace leaving dead Stormtroopers behind it, and Vader and Dhol playing Firepath. Although Vader seems to be losing more pieces, he points out that sacrificing pieces to win the game is a valid tactic.
The figure is revealed to be Clat the Shamer, who intends to overwhelm Vader with his own atrocities and guilt to force the man to kill himself. He enters the game chamber and focuses his powers upon Vader, who simply waits as the figure approaches him across the game board, before triggering a move which incinerates Clat in a pillar of fire.
Dhol seems shocked by this, and Vader reveals he knew of the leaders part in luring him here to try to kill him, and triggers yet another move, walking out of the room leaving the burnt remains of Dhol behind.

High Points : Well, Alan Moore certainly loves his weird Star Wars tales, and this story where Vader simply faces down an assassin by playing an intergalactic version of Chess is pretty weird.
But it's an interesting little tale, and the concept that someone who kills by forcing a target to face up to all of their bad acts, and therefore causes them to punish themselves as dictated by their conscience is an interesting one, but a plan which is obviously doomed to failure against Vaders willpower and lack of conscience.

Low Points : However, we discovered in Return of the Jedi and the Prequels, that while Vader is strong willed, he does have a conscience, and although I can definitely seem him surviving such an attempt. I also see him wracked by visions of guilt in his meditation chamber later.

So what do you really think ? : I enjoyed this one, it's a short but interesting tale. Not really telling a complete story, just a short encounter, which is definitely suited to just 6 pages.

Final Words : Well, we're getting towards the end of the original run of Marvel stories, even with only 3 more left from the Marvel UK run. But some of these final stories are proving to be absolute gems, with some of the worlds best comic writers providing unique little looks into the Star Wars universe with stories unlike any I've read elsewhere within the Star Wars legends universe.