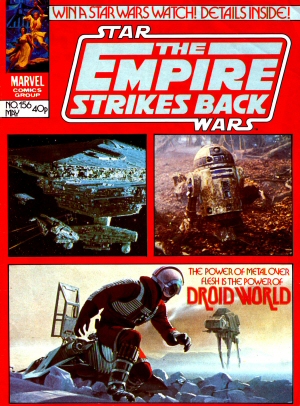 What is it ? : The issue begins discussing the advantages of Droids over organics, and how they have freed organics from much physical labour. As this plays out, we are also shown a transport ship dumping a load of damaged and discarded droids onto the junk world of Ronyards, the crew of which are nervous about the sea of broken droids below.
From the freshly dumped load of droids emerges C-3PO who locates R2-D2 in the pile and sets him back on his feet, the two discuss their mission. The Rebellion is winning against the Empire on their western flank, however if the Empire continues to use metal scavenged from the Ronyards then that momentum may be lost. The two droids are to attempt to rally the surviving droids on the Ronyards against the Empire.
Almost immediately they encounter a large droid called Fivelines, who instantly welcomes the two to his world, telling them they are welcome, even if their ideas may not be. He talks of the droid god, and how the inhabitants of the Ronyards do not wish to get involved in The Galactic Civil War.
C-3PO warns him that they might not get the chance to avoid the war, as the Empire will send a Star Destroyer and just take what they want. Fivelines explains that droids have been dumped here for centuries, and their bodies lie 5 miles deep in places. This has created a metal paradise of droid parts, the body of their living god.
He tells C-3PO that if the Empire tries to take the metal from the Ronyards, they will not succeed.
He then departs to tend the rust gardens, and C-3PO and R2-D2 discuss how his damaged state and long term abandonment on Ronyards must have led to this delusion of the droid god. As they talk the shadow of the arriving Star Destroyer falls over them.
The Star Destroyer sends a group of Stormtroopers out onto the surface, who look upon the damaged droids with disgust, and prepare to blast any which get in their way. The droids tell them that there will be no violence in this holy place, and Fivelines tells them that the Ronyards wishes to do them no harm, and they may leave in peace, as C-3PO warns him of the danger he is in.
The Stormtroopers open fire, destroying the much larger droid, but before his molten remains can even finish falling to the ground, rivets shake themselves loose from girders nearby, peppering the Stormtroopers with metal bolts.
As the Stormtroopers try to react to the attack they are under, they are torn apart screaming by metal tentacles which erupt from the ground, and a wave of mechanical parts. Moments later the Stormtroopers, and indeed the Star Destroyer are gone, leaving only the droids.
The story notes that the Empire records the loss of the Star Destroyer as an act of god, a fluke of nature which led to it's destruction with all hands aboard killed.


High Points : Another interesting Alan Moore story, although the weakest we've seen so far. While the idea that the droids perhaps networked into a massive world sized mechanical body which they refer to as their god, is an interesting one.
The story takes that too far however, by showing it firing out rivets seemingly in a magical or divine manner.

Low Points : And it's this introduction of the magical or divine which doesn't feel like it fits into the Star Wars universe particularly well. If the story had left it that there was a possible other explanation for why the droid god could function (as I've suggested above that all the parts discarded on Ronyards have become networked together into one giant world-sized droid). However the introduction of a machine god with magical powers just feels a bit lazy.

I'd also like to draw attention to the fact that the Star Destroyer seeming lands on the Ronyards to dispatch it's Stormtroopers, something which doesn't match up with anything we've seen a Star Destroyer ever do elsewhere. I suppose the fact that it's trying to act as a glorified cargo transport might help explain it away, landing to more easily load up with metal. But once again it doesn't really match up with established canon.

So what do you really think ? : While I quite enjoyed this issue, the story really feels like a 2000ad story crammed into the Star Wars universe. In fact both in plot and graphical style it really would fit in to the Tharg's Future Shocks series quite well, as the droids definitely look to be drawn in the 2000ad style, as their facial expression seems subservient and sad. And while the Future Shocks are great stories, this really doesn't mesh well with the Star Wars universe, so leaves me a little disappointed.

Final Words : Well, 2 more issues to go before I've covered all of the 1970's, 1980's Marvel Star Wars material from both the US and UK, and 1 more Alan Moore tale to come. I wonder if it'll stand up with the better and more interesting of these issues, or whether we're going to fizzle out on a supreme let down. . ..