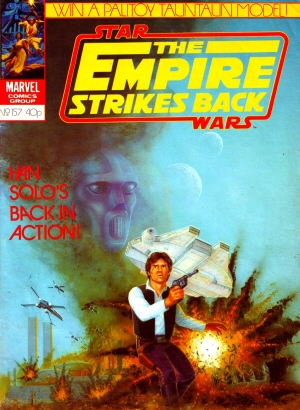 The Empire Strikes Back Monthly 157: The Flight of the Falcon

What is it ? : A patrol of Imperial Tie Fighters are searching for smugglers on the borders of the Empire, but the ships the smugglers are using outrun the Ties and escape.
So the Squadron leader of the Ties reports back to Tarkin, who rebukes him for being out maneuvered and outrun every time. But the Squadron Leader points out the smugglers have started using Millennium Hawks, which are specially modified and can outperform all Imperial fighters.
Tarking tells him that he intends to wipe out the traffic in contraband, so he arranges a meeting with Millennium Astro Engineering to look at new Fighter designs.
One week later on the world of Tharkos, at the headquarters of Millennium Astro Engineering Tarkin meets with the director of the company, who is also it's head of sales, Zoltan Starkid.
Zoltan Starkid shows them the Millennium Hawk, but Tarkin wants something better, so is shown the Millennium Fighter, which is a heavier and better armed vessel. But Tarkin is wanting something faster than the Millennium Hawk, so Starkid shows him the latest design they're working on, The Millennium Falcon. Which he describes as a thoroughbred vessel with a unique hyperdrive system, and Tarkin snaps it up, buying the prototype to be modified by Imperial Engineers before mass production begins.
Outside of the office, the Imperial delegation walks past Starkids secretary, who unknown to them has been listening in on the meeting, and she later departs, heading by speeder to the nearby town of Leviticus. She changes her outfit from that of "suburban secretary" to "uptown uptempo woman" and heads for a nearby cantina, where she sells information about the Millennium Falcon and the Imperial sale to a shadowy figure for 10,000 credits.
2 Weeks later the transport carrying the Imperial Test Pilot who is to collect the Millennium Falcon arrives, a masked figure with a supposedly heavily scarred face. He departs from the starport for Millennium engineering in a landspeeder, with his Stormtrooper escort in another speeder.
As they travel towards Millennium Astro Engineering, another speeder destroys the Stormtroopers with grenades, and seizes the Test Pilots speeder.
At Millennium Astro Engineering they begin to realise the Test Pilot is late, but he eventually arrives boards the Falcon and departs the planet with the new ship.
Once they're clear of the planet, the Test Pilot removes his mask to reveal that it is Han Solo, who tells his comrades they're heading for the planet Mazuma, because he sold the information that Millennium Astro Engineering was working with the Empire to the Rebellion who paid 200,000 credits for the information.
Back on Tharkos, Zoltan Starkid looks on as Rebel X-Wing fighters reduce his factory to rubble, as the Rebellion doesn't like people who deal with the Empire.

High Points : Okay, so first up, we're obvious nowhere near canon in this story, and in fact we're through Legends and right into Infinities here, with a tale that totally contradicts absolutely everything we know about the Millennium Falcon and how Han gained possession of the ship.

Once we get past that, there's not a lot to commend this story for, although there are a couple of nice pieces of artwork, including some very well done pictures of X-Wings, although given they're in the exact same poses as publicity pictures from A New Hope, I guess the artist just copied them from those photographs.

Low Points : Apart from being totally at odds with Canon, this story doesn't make a whole load of sense. Why is the Millennium Falcon a military prototype? No mention of the ship being a YT-1300 is made of at all, which considering I'm pretty sure that had already been established at time of publishing seems a massive lapse.
They could easily have mentioned that this prototype was based around a existing corellian design, or that it resembled one to fit in. But nope they totally contradict what was already known to create their own history for the ship.

Apart from that, the idea that the Rebellion was handing out rewards of hundreds of thousands of credits for reports on which corporations were working with the Empire, turns the Rebels from a ragtag bunch of freedom fighters striking from hidden bases, to something along the lines of crimebusters type telephone service. Report a crime, get a reward.

I've also got to have a moan about the name of the director of Millennium Astro Engineering, Zoltan Starkid. It's obvious how they got that name, Zoltan obviously sounds "spacey", and the concept of bolting two words together like Skywalker was obviously forefront in their minds, so I suppose we're lucky we didn't get him called Zoltan Cloudstrider, or Breezeclimber, or Spaceswimmer, or any other of the many ridiculous combinations you can come up with, although Starkid does sound like a bad superhero name.
And anyway, wouldn't it have made sense for the company to be named after him, making him more egotistical and more affected when the Rebels destroy his namesake at the end of the story, and Zoltan Millennium sounds better than Starkid to me.

So what do you really think ? : Even discounting that this has to be considered an Infinities tale, this is a poor story, with too many elements contrived and skipped over. Like that the Empire just happens to be sending a pilot who wears a mask and is known to wear a mask so Han can replace him (or did they skip something about Han creating and spreading the story that the test pilot needs to wear a mask, as we don't actually see the pilot wearing the mask when Han steals his speeder).
And that they don't send a cargo transporter to collect their new ship, but send a test pilot to collect and fly it back to Imperial Center.

Final Words : I'm left wondering about the fate of Zoltans secretary, she sells the information to Han, but does she then go on the run? Or does she go back to work, and is killed when the company is bombed by the Rebellion two weeks later? Just wondering if she lived to spend her ill-gotten gains.