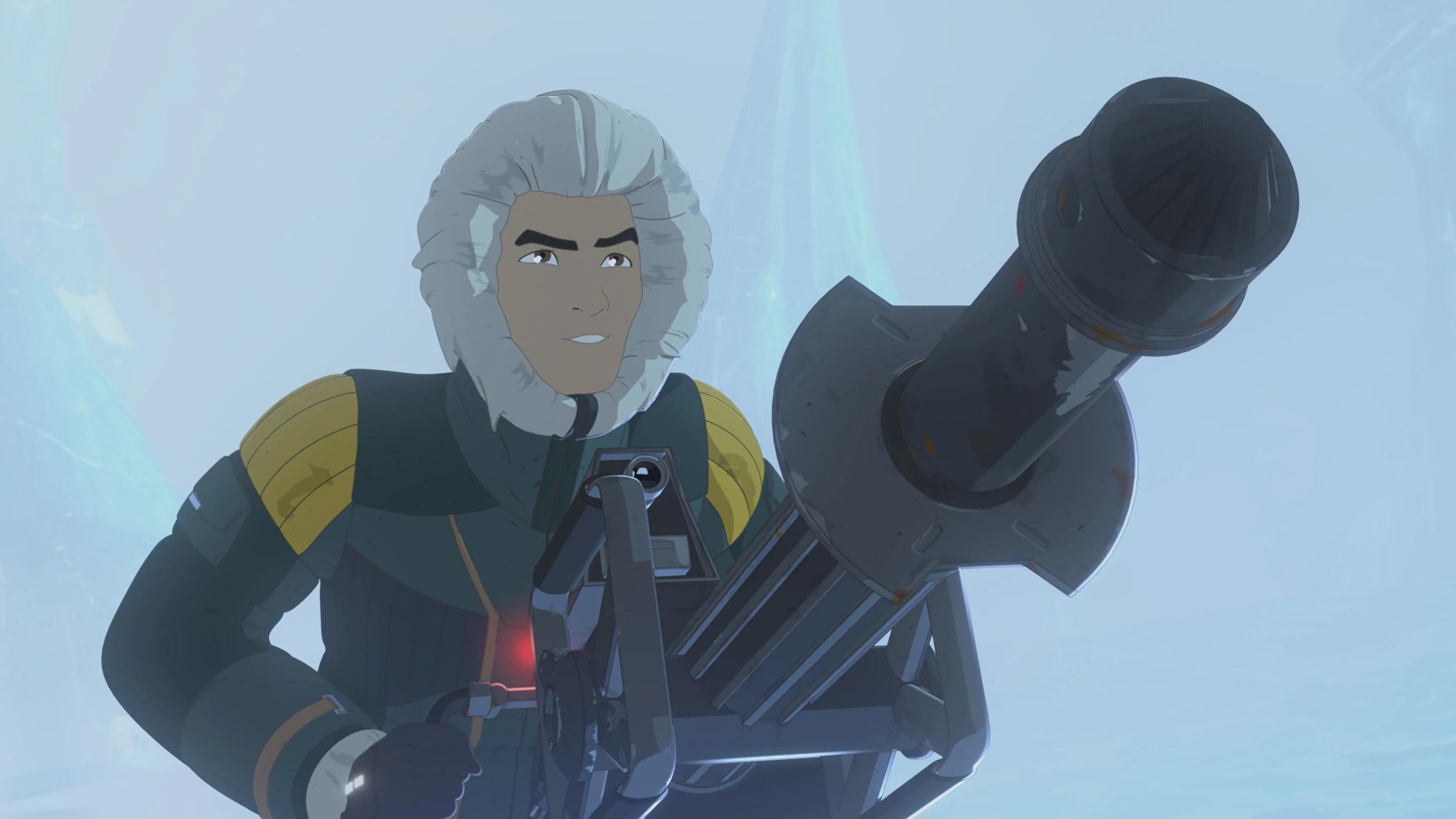 What is it ? : Food has run out on the Colossus, and people are planning to leave the station, led by Aunt Z, who claims there's no point in running a bar if there's no food or drink to sell. She says that she'll leave that night, and when Kaz begs her to stay, she says she's not willing to stay boxed in on the station with no view of the sky and no food, although he could try to hunt one of the giant Jakoosk creatures which captured Yeager last episode which would provide enough food for everyone.
Neeku seems to agree with her, and begins packing his stuff as well, but the leader of the pirates, Kragan overhears, and says he'll bring back one the creatures, not only establishing himself as saviour of the station, but weakening Captain Doza's position as well.
Kaz and Torra accompany the pirates as they return to Celsor 3 and watch as the pirates are totally unprepared for the size and damage resistance of the massive Jakoosk creatures, losing a number of their fighters which crash to the planet surface, and then retreating as Kaz and Torra protect them from pursuit.
Back on the station, Kragan blames Kaz and Torra's interference for their inability to catch the creature and bring it back. Although Kaz and Torra discuss the Jakoosk's weaknesses, realising that it is far weaker from beneath, but still to tough for the weak weapons aboard their fighters.
Kaz remembers that Tam was constructing a powerful cannon for the Fireball before she left to join The First Order, and that it was finished except for its installation. They check the weapon and realise they can use it from the surface of Celsor 3 to shoot down a Jakoosk, not realising that Torras pet Voorpak Buggles has climbed into Kaz's cockpit.
They land on Celsor 3, and Kaz begins setting up the cannon, but Buggles wanders off into the frozen wasteland around them, and Torra follows trying to retrieve her pet. As they follow the creature, two of the Pirates who'd been shot down earlier appear, being chased by a Jakoosk, and they jump in the two fighters are escape, leaving Kaz and Torra stranded.
As Kaz scrambles to prepare the cannon for firing, the Jakoosk swoops down and eats the generator that was powering the weapon, forcing Kaz to connect the weapon to CB-23, who is nearly shorted out by the power drain, but he manages to fire the cannon and bring down the massive creature, leaving them to call in Captain Doza to retrieve them and their catch.
Aboard the Colossus, Synara the pirate brings the two who had stolen the fighters to Kaz and Torra and forces them to apologise, as everyone tucks into giant barbeque steaks of Jakoosk meat.
Captain Doza makes a speech about how he knows his duty is to care for and protect those aboard the Colossus, when a hologram of the sky of Castilon is projected over the marketplace, making it look like it did when the Colossus was still on the ocean world. And Kaz discovers that Neeku has set this up, and was packing his belongings to sell them for the parts, as he hadn't agreed with Aunt Z that they should leave, but agreed with her that they needed the open sky again.

High Points : Back onto form for Resistance with a fairly decent story with some excellent action. The scenes where the pirates are hunting the Jakoosk are excellent as both Kaz and Torra, and the viewer knows how large the creatures are, and how unprepared and overconfident the pirates are, making for an excellent scene as they are attacked and forced to flee as their confidence leaves them.

The later scene on the planet's surface is also excellent, as the stranded pirates steal their fighters (although the ability of these two pirates to just jump in these fighters and take off before the heroes can react did seem to stretch credibility a little), and they are left with only the cannon to take down one of these immense creatures. And then the tension is ramped as the cannons power supply is eaten, leaving them only with their astromech to power the large weapon with.

Low Points : Now I usually have a bunch of problems with any Resistance episode, but this one's not too bad at all. I've a little problem with the speed that Aunt Z is set to abandon them, given Kaz rescued her from First Order imprisonment last season, I'd at least expect her to be a little more apologetic over it.

And secondly, the station has run out of all food, until Kaz and Torra bring back the body of the Jakoosk! So they're now on an all meat diet?
While that's completely possible, and I've had friends on the Atkins diet which was pretty much all meat. But it's surely not going to be very pleasant around there pretty quickly, after eating cooked meat for breakfast, lunch and dinner has its effect. . .

So what do you really think ? : A really solid episode of Resistance, and although I'm definitely getting a feeling that the series is treading water until the release of Rise of Skywalker, this was a fairly entertaining diversion until things get moving, but I do find myself wondering how long this can go on before they need to reveal some details of things happening after the end of The Last Jedi.

Final Words : So next episode is The Engineer, an episode about Kaz and Neeku rescuing a Nikto Engineer (the same species as Neeku), it'll be interesting to see if Neeku is remarkable in his naivety and optimism, or whether all of the Nikto are the same, and the may have perhaps found a further way of treading water, by describing the events of The Force Awakens and The Last Jedi from different points of view. But we shall see in one weeks time.