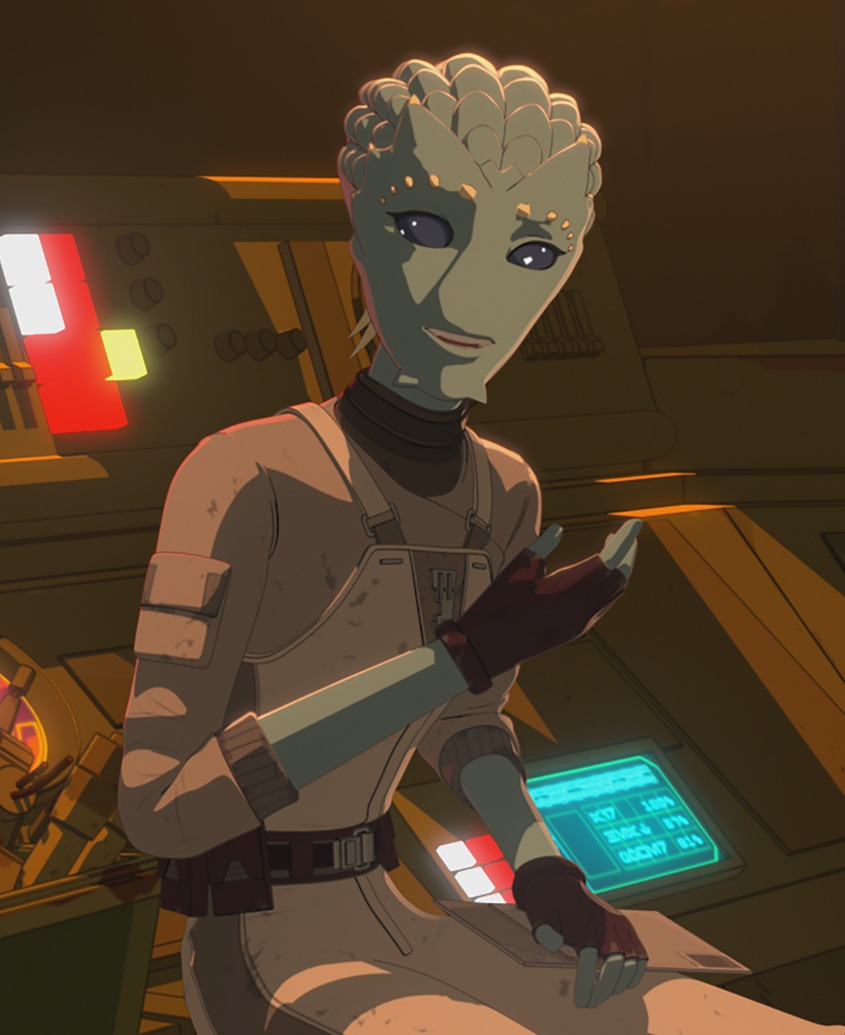 What is it ? : The Colossus is still experiencing numerous system failures due to damage taken during their encounters with the First Order. Neeku is doing his best, but is overwhelmed, but as he gets communications working again they detect a distress signal from someone claiming to have been attacked by the First Order.
Kaz and Synara take a Star Commuter Shuttle to the vessel emitting the distress call, where they discover a Nikto Female called Nena, who is nervous about Synara because she is a Pirate. They taken her and her ship back to the Colossus to repair it, and talk Nena into helping them repair the Colossus.
She strikes up a friendship with Neeku, and the two of them make massive strides into repairing the Colossus, getting most systems back online. However they investigate a power drain in the Pirates docking bay, and Nena tells Neeku that the Pirates are draining fully 50% of the Colossus power.
They tell Kaz, who investigates but is caught by Synara, who tells him that she set up the Pirate power systems, and they're not taking the power, barely getting enough for their own needs. Synara tells him that Nena is making these accusations and driving a wedge between the people on the Colossus, suggesting that if she's such an excellent engineer, why couldn't she repair her own ship.
The two investigate Nena's ship, and discover that she's working for the First Order to disable the Colossus and signal it's location once they're vulnerable. As they try to tell Neeku, Nena realises that they're onto her, and activates her handiwork shutting down the Colossus, and she departs aboard her shuttle, signalling the First Order who arrive in their Resurgent Class Star Destroyer, pay her for her work, before she jumps to Hyperspace.
The First Order scrambles Tie Fighters to attack the disabled fuel station, and Neeku and Kaz attempt to undo Nena's work on the station, Neeku working on the bridge, while Kaz runs around the Station repairing Nena's modifications one by one, restoring the systems.
However, even when they're all undone, the station has lost enough power to not be able to make the jump to Hyperspace, so Kaz has to beg the Pirates to give up the small amount of power they take to save everyone's lives, something that Kragan reluctantly agrees to, and the Colossus jumps away to safety.
Later, Kaz commiserates with Neeku over Nena's betrayal, and Neeku regrets being so trusting, but Kaz tells him that's what makes him a good person. Neeku tells Kaz that he was always his Best Friend, but now he is his Bestest Friend, along with a particular chair, Buggles and Bibo.

High Points : Another pretty solid episode, with the Pirates used as an excellent distraction as it isn't apparent that they aren't stealing power from the station until Synara vouches for them.

It's also another episode where Kazuda doesn't get insulted all the time, he's competent and saves the day, the way a hero should. The series is definitely working out better without Tam belittling Kaz all the time, and using Synara instead works well, since she compliments Kaz's deficiencies without making him any less the hero of the story.

Oh, and we also get the resolution of a mystery that's been hanging over us since the end of last season, what happened to Opeepits Floor Sweeper?
Last season, the First Order when they occupied the station seized the Floor Sweeper that the station janitor Opeepit had been seen using throughout the first season. Now at the time I thought it was odd that the First Order, capable of building hordes of Tie Fighters and an entire Fleet of Resurgent Class Star Destroyers would need to steal a floor sweeper. Well it turns out that they didn't, they just locked it in a closet, and Nena repairs the door allowing Opeepit to reclaim the device and start cleaning the floors again. A lovely little callback, and one that I definitely approved of it's inclusion in the episode.

Low Points : Something that's been annoying me for a few episodes now, and it's growing worse as the story goes on, but what does everyone else on the station do?
In this episode the Colossus, which is apparently several kilometers in size, is maintained by one person, Neeku. And when the station is in danger of destruction, only Kazuda helps him out!
Now, we've seen that the station used to be maintained by the Chelidae, turtle like aliens who live aboard the station! And we were led to believe there were other rival repair shops apart from Yeagers, where other racers took their ships, and where people threatened to take their work when Kaz messed up! We also saw various droids doing maintenance work from time to time!
So where are all the other technicians? Where are the droids? Why is this massive starship repaired by only 2 people. What does everyone else do? We used to see them trading during the 1st season, in a market full of food and goods, but we know the station isn't being visited by anyone, and there's been a shortage of food, so what is everyone else doing? As although we see a cast of dozens, maybe even hundreds of people in crowd scenes, we can only account for maybe a dozen of them actually having a job to do at the moment. The Ace's fly, Captain Doza commands, Aunt Z runs her cantina, but everyone else?

So what do you really think ? : A lovely solid episode, although I still feel like the story is treading water, with recent episodes often ending with the Colossus jumping away in the nick of time. If the First Order don't tag the station with a tracking beacon during their next encounter, or use an Interdictor Cruiser, then they're not even a viable threat as the heroes will just escape every week by using Hyperspace.

Final Words : Next week we've got "From Beneath", where Kaz and Flix visit Flix's homeworld and family, where drilling has awoken something monstrous . . .