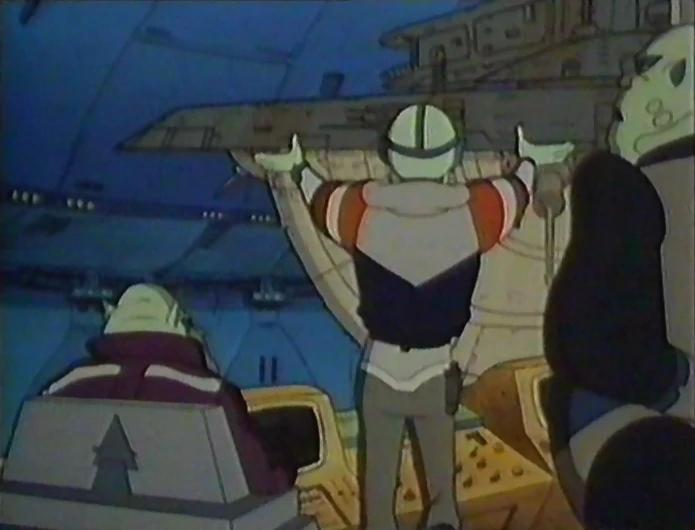 What is it ? : The episode begins with C-3PO and R2-D2 on the outside of Kea's ship, The Sand Sloth, carrying out repairs while floating in space. C-3PO allows the Hyperdrive to float off into space, but Kea tells him it's okay as she can get a new one from her mother who lives on a nearby planet, Ingo.
They arrive at the spaceport, but as they queue to pass through customs, they spot a couple of Fromm gang members looking for them after their actions in the last episode. R2-D2 acts crazy causing a panic, and providing a distraction for them all to board the White Witch and speed away. At Kea's mothers house they settle down for the night, as C-3PO and R2-D2 do chores to help out around the place, tending the Sand Sloths which are farmed here. C-3PO accidentally opens a hidden door, and they discover there is a hidden Rebel base here.
As they attempt to tell their new owners, they disturb an attack by Fromm Droids, after which Kea's mother tells them that the attack came not after the, but because she is working to stop the Fromm's who are building a secret weapon, the Trigon One.
They devise a plan to sneak into the Fromm base, by putting themselves in cargo containers, and R2 and 3PO posing as cargo handling droids. They are almost discovered, but 3PO saves the live of one of the Fromm's, who trusting the droid who just saved his life allows 3PO to take the cargo containers into the base without inspection.
Inside they discover the Trigon One, and steal it, using a Thermal Detonator to blow the hatch open and escape. As they flee into space, the Fromm's launch droid starfighters to intercept, but they prove ineffective against the weapons of the Trigon One.
Afterwards, they all agree that the Trigon One is too powerful to allow anyone to use.

High Points : Okay, I'm going to reach a little for the good points of this episode, but I have to say that I'm very surprised in the fact that these episodes form a cohesive ongoing story. Normally, especially for a saturday morning cartoon I'd expect every episode to stand alone, but here we get the story following on directly from the last one, with them aboard Kea's starship, and I can only assume we'll get them still aboard the Trigon One at the start of the next episode.

Low Points : I get the feeling that the writers of Droids really hadn't immersed themselves in Star Wars lore, as we get some pretty unusual choices throughout. For example, they include a B-Wing starfighter flying across the sky as the heroes arrive at Ingo, but chronologically it's quite a while before the B-Wing was designed and built.
But even if we ignore that (as that lore probably hadn't been written), why is a Rebel fighter flying around from a Starport? And even more worryingly, why is it flying in reverse?

Threepio continues to be the main source of humour in the series, with him getting stuff squirted on him and constantly falling over into rather peculiar and compromising poses (usually presenting his rear end to the camera). Now, I know it's a kids cartoon, so some pratfalls and clownish behaviour should be expected to keep things light, but it's only the second episode and it's getting pretty tiresome already.

So what do you really think ? : Okay, the series isn't a complete disaster, and the fact that it's trying to tell a longer story cut down into episodes is pretty darn incredible for the time. But it's really pretty poor Saturday morning fare for the time, with C-3PO being not only one of the main protagonists of the series, but also the comic relief. It's almost as if they looked at Thundercats and decided that the hero really should have been Snark, or looked at He-Man and thought the entire series should have been about Orko and Cringer.

Final Words : The ongoing story is what I think will carry me through this series fortunately short run of 13 episodes. While the individual episodes seem to be pretty standard fare, I'm interested to see how a 1980's cartoon handles the droids moving from owner to owner throughout, as C-3PO and R2-D2 are the only characters which continue through the series, and soon Kea, Jord and Thall will be left behind.