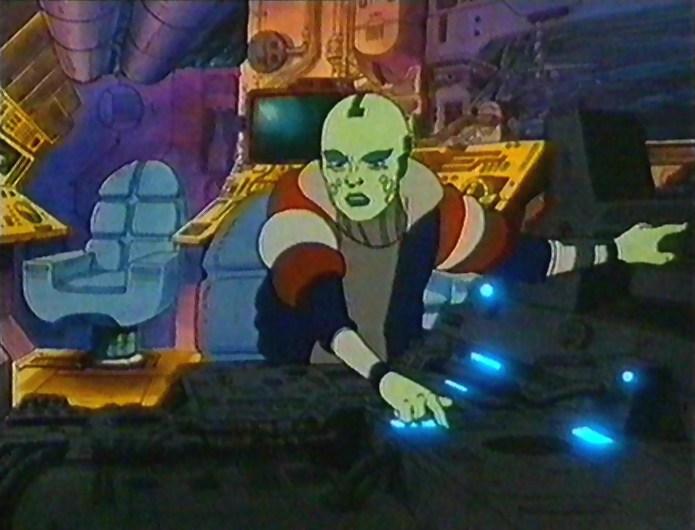 What is it ? : Thall and R2-D2 set off to destroy the Trigon One, leaving Kea and C-3PO behind, as the less people that know the superweapons location the better. C-3PO attempts to repair a communications module so they can watch some entertainment while they wait, only to monitor a communication between Tig Fromm and his father Sise Fromm. The communication reveals that they've found the people who stole the Trigon One and are about to ambush them on Ingo, and Kea realises that means that the Fromms are just outside. Thall swoops back in, and Kea and 3PO leap aboard the White Witch and they speed off through the city.
R2-D2 realises that they are evading the Fromm's too easily, and that they are being herded into a trap, which turns out to be true and they are captured. Tig attempts to get the location of the Trigon One from them, revealing that Jord, and Kea's mother Demma have already been captured. But Thall refuses to tell Tig, saying he'll only tell Sise himself.
Tig takes them to Sise at the Fromm headquarters on Annoo, and Thall reveals the location of the Trigon One as he said he would, and the group is then taken to detainment where their friends are already being held.
They escape from their restraints and begin escaping from the Fromm base, when Thall reveals that he and R2 have sabotaged the Trigon One, and it will soon arrive and destroy this base. They steal a Lambda class shuttle and escape, as do the Fromm's as their base it destroyed as the Trigon One crashes into it on Autopilot.

High Points : This episode isn't quite as silly as the previous two, and there's definitely a reduction in the amount of times C-3PO falls over, which can only be a good thing. While the episode doesn't exactly tell a great action story, it's definitely a step closer than the previous two, and we get the heroes setting up the enemy super weapon to destroy the bad guys, which is at least a satisfying ending to the story.

Low Points : So starting at the beginning of the episode, if Thall's plan is that he and R2 are going to destroy the Trigon One why does Kea and C-3PO knowing it's location matter? The only answer to this is that he's lying to Kea, and already knows that Jord and Demma have been taken captive, so he is deliberately allowing 3PO and Kea to be put in danger to lure the Fromm's out, and allow everyone to be captured so he can rescue the others. Which seems a bit of an elaborate plan from someone who currently has control of a superweapon?
And if that's the plan all along, then why does R2-D2 tell everyone that they're being lured into a trap?
It's all just a little too coincidental.

So what do you really think ? : Well it wraps up the Trigon One storyline quite nicely, and pretty much destroys the Fromm's as a credible threat, although we might yet see the other gangs coming to get them now they are vulnerable, and everyone knows they intended to use their superweapon on them.

Final Words : So I guess the next episode is going to be about Thall and From getting to the Boonta Speeder Race, to compete in it, although I can't really see how Demma and Kea should be involved as they've been revealed to be Rebels. So is this the beginning of the change over to the next set of owners, as this group breaks up? We shall see.